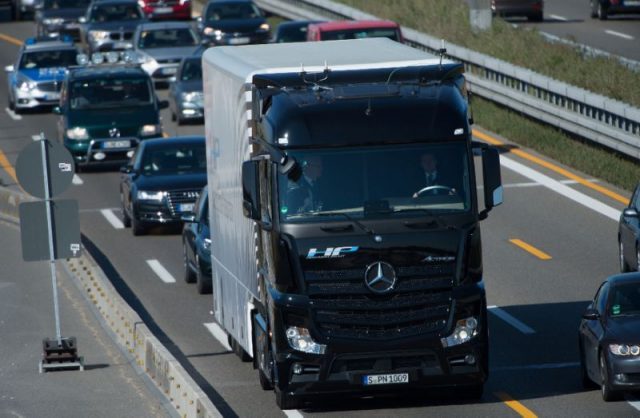 The MOU was signed on behalf of NLC by Major General Mushtaq Faisal, DG NLC, and Mr Zia Ahmed, CEO Pak NLC Motors, and on behalf of Mercedes‐Benz Special Trucks by Mr. Klaus Fischinger, Head of Executive Committee, and Dr Ralf Forcher, Head of Sales at Woerth, Germany. Also present at the signing were Mr Naseem Shaikh, Director and General Manager, Shahnawaz Ltd. and Mr Ahmed Naeem of Shahnawaz Ltd, the Authorized Distributor of Daimler AG in Pakistan, who have been instrumental and played a key role in bringing together the two partners for this project of national importance.

Talking on the occasion, Major General Faisal termed the MOU as an historic moment for Pakistan’s commercial vehicle industry. He said that local assembly of Mercedes‐ Benz trucks by NLC would prove a strategic opportunity to leverage the modernization of Pakistan’s logistics industry which would benefit tremendously from having a state-of-the-art assembly plant in Pakistan being setup by NLC. Because of the incentives given in Auto Development Policy 2016‐21, local assembled Mercedes‐ Benz trucks would be offered on competitive prices.

Pakistan’s Auto Development Policy is encouraging local corporations to collaborate with foreign manufacturers to produce trucks and vehicles in Pakistan. Several European companies including French Renault, and Chinese FAW are negotiating with local Pakistani companies for either joint production or imports in CKD Kit form. NLC is however planning for full local manufacture and is thus a big step forward. Its not clear how many Mercedes Benz trucks will be manufactured in the first year. Details will be finalized in June 2018.

DG NLC said, on the occasion of signing MOU, that local assembly of Mercedes‐Benz trucks will ensure a healthy competition in the trucking industry of Pakistan and meet the logistics requirements of CPEC. He added that it will bring qualitative change in local vendor industry and will provide opportunities for new jobs. NLC with around 2500 prime and small trucking vehicles is the largest trucking company in Pakistan followed by several smaller companies. However more than 200,000 trucks across Pakistan are owned by individual small traders.

Dr. Ralf Forcher, Member of Executive Committee and Head of Sales and Marketing, Mercedes‐Benz Special Trucks said “Pakistan’s infrastructure and construction  sectors have registered significant growth in recent years having a direct effect on the logistics industry as it gives rise to an increased demand for commercial vehicles.

By commencing local assembly operations of Mercedes‐Benz trucks in Pakistan, NLC will be able to cater for this demand more efficiently and respond to market trends quickly”. It is pertinent to mention that strong growth in Pakistan’s GDP has contributed towards a significant boost in rising demand for commercial vehicles. In addition, the China Pakistan Economic Corridor (CPEC) project is also playing an important role in raising demand in this sector. Modern transportation networks built under CPEC will link seaports in Gwadar and Karachi with northern Pakistan, as well as points further north in China and Central Asia.

CPEC projects will increase road networks and connectivity across Pakistan which is essential for Pakistani trucking companies like NLC and others. High road density for any country is an indicator of prosperity and development. Pakistan, according to a study conducted by Competition Commission of Pakistan, in 2011, has a road density of 0.33Km/Sq with a total road network of around 263,942 Km.13 Road density in Pakistan was, then, among the lowest in the region (33%) compared to 133 percent in India and 150 percent in Siri Lanka.

But, despite these limitations, in Pakistan road transportation is the most important mode of transportation, Roads handle approximately 96% of the total freight traffic (Government of Pakistan, 2010). The National Highways and Motorways network although constitutes 4.2% of the total road network but carries almost the entire freight traffic i.e. 96%  which then creates pressures upon these highways leading to rapid erosion. The busiest route is the north-south route of N-5 highway that is the longest route comprising of 1,760 Km and runs from Karachi to Torkhum. This route carries 65% of inter city traffic and serves 80% of Pakistan’s urban population and contributes to 80-85% of Pakistan GDP. CPEC is now bound to create alternate highway options. A new study is needed to estimate how road density in Pakistan will improve with developments of past few years.