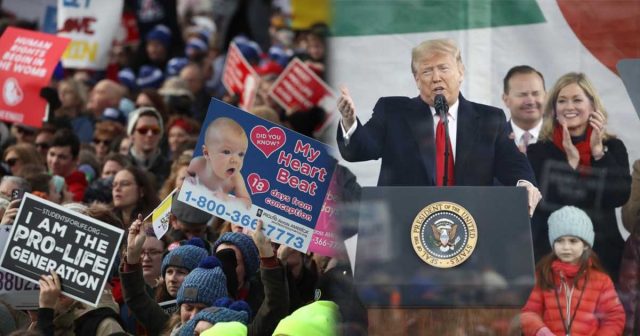 President Trump this week became the third president in US history to face trial in the Senate after being impeached by the House of Representatives. And on Friday, he became the first sitting president to speak at the March for Life, the nation’s largest anti-abortion rally.

US President Donald Trump, seeking to shore up evangelical support ahead of the November Presidential elections, addressed the anti-abortion rally as the Senate sat in judgment nearby at his impeachment trial.

“Unborn children have never had a stronger defender in the White House,” Trump told tens of thousands of anti-abortion campaigners at the 47th “March for Life” on the National Mall.

Trump, the first president to address the annual event in person, assailed Democrats for supporting abortion rights and claimed that “religious liberty” was under attack.

We will fight tooth and nail to protect the right to safe, legal abortion.

As Trump attends the March for Life rally today, Democrats are protecting the constitutional right to choose. https://t.co/gsatUib1NZ

The March for Life has been held every January since 1974, the year after the Supreme Court established the right to an abortion in Roe v. Wade. It’s a time when anti-abortion activists gather in Washington, DC, and around the country to protest Roe and push for stronger restrictions on Americans’ ability to terminate a pregnancy.

Historically, Republican presidents have addressed the event remotely, by phone or satellite link, as Marc A. Thiessen writes at the Washington Post.

Trump himself has appeared by satellite in previous years. But this year he decided to come in person, inspiring praise from many anti-abortion advocates.

“Trump will be greeted as a pro-life hero, because he is one,” Thiessen, who worked as a speechwriter for former President George W. Bush, wrote.

“When it comes to abortion,” the 73-year-old Republican president said, “Democrats have embraced the most radical and extreme positions.”

“We have taken decisive action to protect religious liberty,” he added.

Following Trump’s brief remarks, the crowd broke into a chant of “four more years,” a reference to the November vote, when Christian evangelical support will be crucial to Trump’s re-election.

“I vote pro-life,” said signs held by members of the crowd.

Trump made only a single reference to the impeachment trial going on just down the street that could see him removed from office for abuse of power and obstruction of Congress.

Read more: Pompeo on abortion: Is it or is it not a Human Right?

“They are coming after me because I am fighting for you and we are fighting for those who have no voice,” he told the crowd. “And we will win because we know how to win.”

Beverly Atkins, 55, drove 13 hours from Alabama to attend the rally.

“Life begins at conception,” Atkins said, “We don’t think you should destroy that.”

Democrats struggling to get Trump removed

As for impeachment, she said Democrats “have no evidence” that Trump did anything wrong.

The seven Democratic impeachment “managers” are to make their final arguments at Trump’s Senate trial on Friday.

White House lawyers will then have 24 hours, starting at 10:00 am (1500 GMT) on Saturday, to present their defense of the president, who was impeached by the House of Representatives on December 18.

US political pundits and analysts are of the opinion that it is very unlikely for the Democrats to get the Republican-held Senate to go against Trump in the impeachment trial, despite their convincing arguements against the President.

Impeachment may forever stain his record, but Trump is virtually assured of acquittal by the Republican-held Senate — and he is already looking past the trial to the re-election fight that awaits.

Before entering politics Trump defended abortion rights, but he has increasingly aligned himself with the anti-abortion movement as he works to firm up his electoral base.

“I love Trump,” said Jim Bolognio, 63, who came to the rally from New Jersey. “These people are going to reelect him.”

“My daughter is adopted,” Bolognio added. “She wouldn’t be here if her mother didn’t choose the right path.”

Brayden Harris, 16, who came to Washington from Hershey, Pennsylvania, with the “pro-life” club of his school, said “abortion is wrong.”

“God says he knows you before you’re even born, so in the womb he knows you,” Harris said. “It’s what it says in the Bible.

The “March for Life,” which Trump had addressed by video the last two years, is held annually on or near the anniversary of the Supreme Court’s ruling in the Roe v Wade case which legalized the procedure nationwide on January 22, 1973.

“Since day one, this administration has carried out a full-out assault on our health and our rights,” said Alexis McGill Johnson, acting president of the Planned Parenthood Action Fund, which supports abortion rights.

Conservative-leaning Chief Justice John Roberts is seen as the potential swing vote if the constitutionality of abortion eventually comes before the court.

Around two-thirds of Americans say abortion should be legal, polls suggest.

But while Roe v Wade remains the law of the land, numerous states have taken measures to limit access to the procedure.

The first big Supreme Court test of that anti-abortion push will come in March, when the court examines a Louisiana law whose restrictions on abortion are similar to a Texas law struck down nearly four years ago.

Like each year, the march wound its way from the National Mall towards the Supreme Court near the Capitol, where senators are sitting as jurors in Trump’s impeachment trial.

Republicans hold a 53 to 47 edge in the Senate and a two-thirds majority of the 100 senators would be needed to convict and remove the president from office. 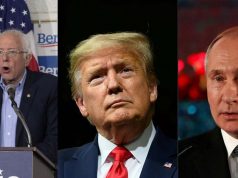 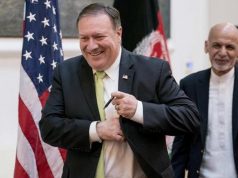 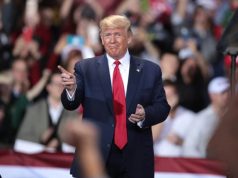 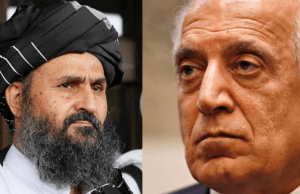 February 28, 2020
Taliban-US deal came down largely to two Afghan men - one working for the US, the other for the militants. Their lives have been... 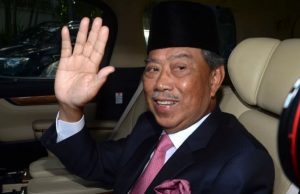 February 29, 2020
Malaysia's Mahathir Mohamad lost a power struggle Saturday with a little-known ex-interior minister to be the country's new prime minister in a shock twist...

SECP gives 291 names for JIT: Who will be the chosen “diamonds”?