Trump to give Mideast peace plan, unlikely to satisfy all parties given Trump’s pro-israel bias

Finding a lasting solution to the never-ending quagmire of Israeli occupation has one one of President Trump's main promises. However, Trump's obvious tilt towards Israel, his recognition of Jerusalem as Isreal's capital and inaugurating a US Embassy there - with innocent Palestinians being killed merely miles away, suggests that Trump's so-called 'peace plan' will be unacceptable to all parties. Will Trump find a solution or are the persecuted Palestinians sentenced to remain refugees in their own homeland? Only time will tell. 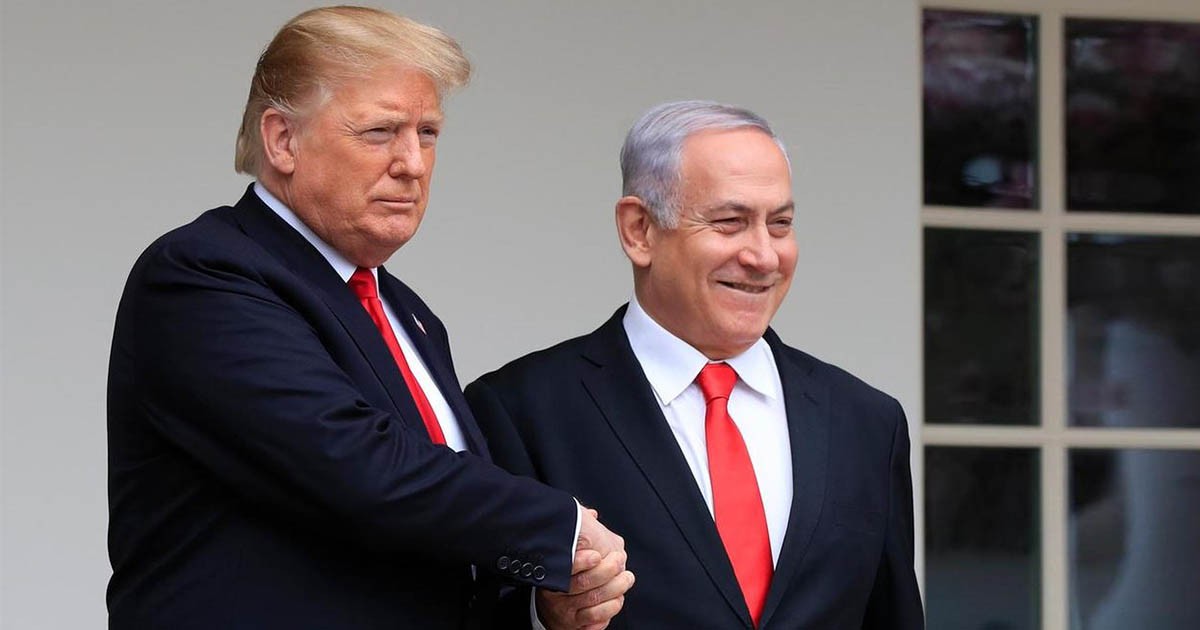 US President Donald Trump said Thursday he will release a long-delayed plan for Mideast peace.

Finding a lasting solution to the never-ending quagmire of Israeli occupation has been one of President Trump’s main campaign promises.

However, Trump’s obvious tilt towards Israel, his recognition of Jerusalem as Israel’s capital and inaugurating a US Embassy there – with innocent Palestinians being killed merely miles away, suggests that Trump’s so-called ‘peace plan’ will be unacceptable to all parties.

The decision to open an embassy in Jerusalem – the second most Holy City for muslims, infuriated leaders all over the world, with President Erdogan giving a fiery speech against it and calling for an emergency OIC meeting to address the problem. Even China and Russia supported the call for East Jerusalem as Palestine’s capital.

US President Donald Trump said Thursday he will release a long-delayed plan for Mideast peace before a meeting in Washington next week with Israeli Prime Minister Benjamin Netanyahu.

“Probably we’ll release it a little bit prior to that,” the US leader told reporters traveling with him to Florida on board Air Force One, referring to the White House meeting on Tuesday.

“It’s a great plan. It’s a plan that really would work,” he added.

The Palestinians, who were not invited to the White House meeting with Netanyahu, immediately rejected the US-hosted talks, as they reject the peace plan itself, which has been in the works since 2017. Its release has been delayed repeatedly.
https://twitter.com/Breaking911/status/1220509398105231362

The economic part of the plan was shared in June and calls for $50 billion in international investment in the Palestinian territories and neighboring Arab countries over 10 years.

The Palestinians, who refuse to talk to the Trump administration since he recognized Jerusalem as Israel’s capital, reject the peace plan because it seems to bury the two-state solution that for decades has been the cornerstone of international diplomacy aimed at the two.

On the plane Trump said he was pleased that both Netanyahu and his main electoral rival Benny Gantz, head of the centrist Blue and White party, would come to the White House in the middle of the campaign for Israeli elections on March 2.

“We have both candidates coming — unheard of,” Trump said.

Asked if he had contacted the Palestinians, Trump said: “We’ve spoken to them briefly. But we will speak to them in a period of time.”

“And they have a lot of incentive to do it. I’m sure they maybe will react negatively at first but it’s actually very positive for them,” Trump said.

But the Palestinian Authority reiterated its rejection of the White House peace plan.

“This step only reaffirms our absolute rejection of what the US administration has done so far, particularly the recognition of Jerusalem as Israel’s capital,” Palestinian President Mahmud Abbas’ spokesman said in a statement.

Trump, whose team has long been working on the outlines of a secretive peace plan, has repeatedly boasted that he is the most pro-Israeli US president in history.

Abbas cut off all ties with the United States in December 2017 after Trump broke with decades of international consensus and recognized Jerusalem as Israel’s capital.

The Palestinians see the eastern part of the city as the capital of their future state and world powers have long agreed that Jerusalem’s fate should be settled via negotiations.

Trump came to power in 2017 promising to broker Israeli-Palestinian peace, which he labelled the “ultimate deal.”

But he has since taken a series of decisions that outraged the Palestinians, including cutting hundreds of millions in aid and declaring that the United States no longer considered Israel’s West Bank settlements illegal.

His plan for ending the Israeli-Palestinian conflict is believed to revolve around encouraging massive economic investment.

After many postponements, the peace initiative was expected several months ago.
Read more: Why the Trump administration’s Israeli-Palestinian peace plan shouldn’t be released

But it was delayed after September elections in Israel proved inconclusive, and it was not expected to be released until after the March 2 elections.

Israeli media discussed what it said were leaked outlines of the deal Thursday, saying the United States had acquiesced to many key Israeli demands.

The meeting on Tuesday coincides with an expected session in the Israeli parliament to discuss Netanyahu’s potential immunity from prosecution over a series of corruption charges.

Israeli media speculated that Trump had chosen to announce the event in support of Netanyahu’s election bid — the third in a year.
Read more: Netanyahu win gives US peace plan ‘better chance:’ Trump

Husam Zomlot, former head of the Palestinian mission in the United States, said that Trump hosting two Israeli leaders and no Palestinians showed the meeting was about influencing domestic Israeli politics, rather than a genuine attempt at peace.

“This is confirmation of their policy from the beginning — it is all about and for Israel.”
Palestinians have been devoid of a place to call home with the unlawful Israeli occupation having been there for almost a century.

Time is running out to find a peaceful solution to the problem, one can only hope that the world at large realizes the intensity of the matter at hand and find a fair way forward.

Will Trump find a solution or are the persecuted Palestinians sentenced to remain refugees in their own homeland? Looks like the latter is more likely.

How is ‘Game Of Thrones’ star Kristofer Hivju after COVID-19?

How a hospital in India became an epicenter of the coronavirus?