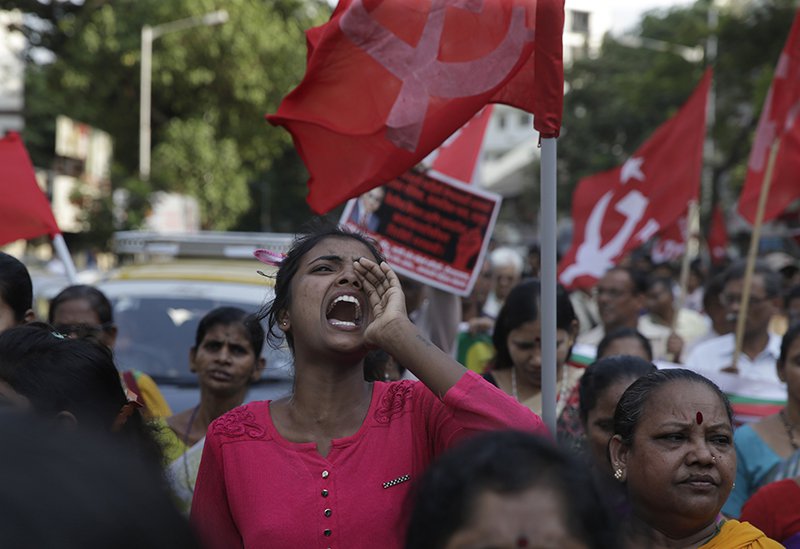 He alleged that socially oppressed castes had been marginalized in Haryana and made a victim of politics. Khapad said he did not have the exact number of his fellow activists who had converted as they had traveled separately to Delhi’s Ladakh Buddhist Centre. “The number was around 100,” he said.

“We have been demanding a CBI probe into the alleged suicide of my uncle Ishwar Singh and the alleged rape-murder of a Dalit girl from Jhansa in Kurukshetra. Also, the widow of a Dalit CRPF jawan, Satish Kumar from Jind’s Chhatar village, was subjected to humiliation by the Bharatiya Janata Party (BJP) government by not giving her a job. No public place has been named after the late CRPF soldier who was killed in Kathua in 2015,” he said.

Khapad’s uncle Ishwar Singh was a contractual employee of Confed at Jind. On January 19 last year, Ishwar committed suicide by hanging himself at his house. The police had found a two-page note from his possession in which the deceased had accused three persons — the then Jind DFSC Ashok Rawat, the then Julana SHO sub-inspector Ram Niwas and a government contractor— of forcing him to commit suicide.

“The authorities are shielding the accused. The police have also failed to file a charge sheet in the abetment of a suicide case. I see a serious threat from the accused named in the case as the district authorities have withdrawn police security cover given to me,” claimed Khapad, a complainant in the Ishwar suicide case.

Khapad said a delegation had met Chief Minister Manohar Lal Khattar on March 7 where he had assured action in various issues.

“We had given an ultimatum on May 20 that we will convert if he doesn’t fulfil our demands in a week. Khattar visited Jind on May 26, but our representatives were not allowed to meet him. So, we started a march towards Delhi on May 27,” he said.

He said the deceased jawan had not been accorded the status of martyr due to the rules of the paramilitary forces but the district administration had approached the defence authorities to reconsider the issue.

He alleged that socially oppressed castes had been marginalized in Haryana and made a victim of politics. Khapad said he did not have the exact number of his fellow activists who had converted as they had traveled separately to Delhi’s Ladakh Buddhist Centre. “The number was around 100,” he said.

Meanwhile, Shillong has been on the edge over the last three days following reports of clashes between the local Khasi tribals and the Dalit or Mazhabi Sikhs with the latter facing security threats. Mazhabi Sikhs are Dalits who rejected the caste hierarchy of the Hinduism dominated by Brahminical forces to find refuge in Sikhism. Like Hindu Valmikis, they continue to be at the lowest rung of socio-economic strata and hence remain the most vulnerable.

There are various versions coming on what triggered off the tension between the Khasis and Mazhabi Sikhs in Shillong on Thursday evening. There are reports saying that the violence was triggered on Thursday night over an incident of eve-teasing by and subsequent assault of a person from the local community. The second version is about an altercation over the parking of a bus by a Khasi driver.

In any case, it was the social media that once again led to spiraling of rumors and subsequent violence which is still to die down. There are reports of the Sikhs being targeted as outsiders whom a section of the locals wants to leave their present settlement.

Back home in Punjab, the Captain Amarinder Singh government was quick to react following reports of security threats to the Dalit Sikhs in Shillong and on Sunday decided to rush a four-member team, headed by Cabinet minister Sukhjinder Randhawa to take stock of the situation in Meghalaya capital.

A Punjab government spokesperson said, “The team will make a ground assessment of the situation in the troubled areas of Shillong and extend all possible help to the Sikh community there. The Chief Minister has directed the team with MPs Gurjit Aujla and Ravneet Bittu along with MLA Kuldip Singh Vaid as its other members, to leave for Shillong.”

Mazhabi Sikhs are Dalits who rejected the caste hierarchy of the Hinduism dominated by Brahminical forces to find refuge in Sikhism. Like Hindu Valmikis, they continue to be at the lowest rung of socio-economic strata and hence remain the most vulnerable.

Amarinder has also sought Meghalaya Chief Minister Conrad Sangma’s cooperation in facilitating the team’s visit and ensuring their access to the areas from where reports of tension or trouble are coming in. He has asked Sangma to provide full protection and safety for the Sikh community and their religious institutions in the state.

The spokesperson said that Amarinder’s decision to send a team to Shillong was triggered by reports that despite the Meghalaya Chief Minister’s personal assurance, the situation was still not under control and had the potential of escalating further. Amarinder has offered all possible help to the Meghalaya government in ensuring the security of the Dalit Sikhs, whose ancestors were brought to Shillong during the British era. He said that if necessary, the Centre should intervene to defuse the communal tensions in which the Sikhs in Shillong are caught.