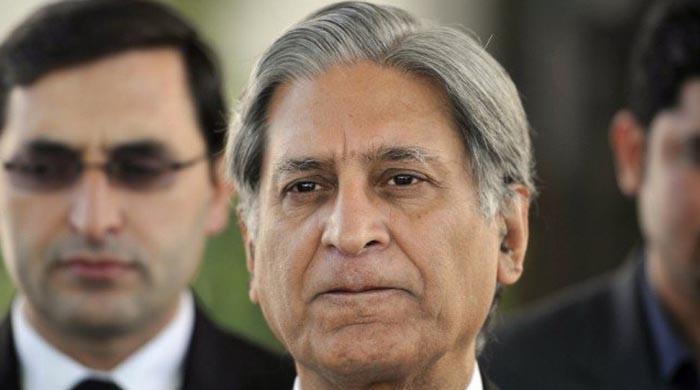 Pakistan People’s Party (PPP) Senator Aitzaz Ahsan on Monday said the incumbent government should be allowed time to prove itself. The statement shows a crack within opposition ranks over how to deal with the PTI government. Speaking to reporters outside the Lahore High Court Bar, Ahsan said that hundred days were not enough to conclude if the government was headed in the right direction or not.

“Hundred days are given [to judge] a presidential system, not a parliamentary system”, the veteran politician and legal icon said. “PTI should itself not use [this criterion] to judge its performance,” the PPP leader said in response to a journalist’s question.

The veteran politician statement’s while at the same time criticizing the government but also shows a divide among the opposition.

Referring to earlier claims by Railways Minister Sheikh Rasheed that Prime Minister Imran Khan had offered him Ministry of Information in which Rasheed was also quoted as saying that Information Minister Fawad Chaudhry was “on a picnic in London for the last eight days.”, Mr. Ahsan said that “They don’t even have a majority in the Senate,” adding that conflicts among ministers were no big deal.

In contrast to his statements today on 10th of December, Mr. Ahsan on Nov 27 had taken a dig at the Pakistan Tehreek-e-Insaf government. “Imran Khan’s 100-day plan was a clamor,” he had said while speaking at an event at a private hotel. Mr. Ahsan explained that the kind of projects announced by the PTI government was practicable in a society where the presidential system of governance is followed.

The claims of the PTI related to ‘change’ were far from reality and these people were not capable of bringing any change either, the PPP leader had remarked. The PPP leader had also commented on Nawaz Sharif’s proceedings, saying that the former PM’s varying statements are inescapable. Pakistan People’s Party (PPP) senior leader Aitzaz Ahsan said that Nawaz Sharif might get jail term because of ‘flawed’ defense in the Al-Azizia Steel Mills reference filed by the National Accountability Bureau (NAB).

“Nawaz Sharif as prime minister had given a ‘confessional’ statement on the floor of the house (National Assembly) regarding his family’s assets and businesses abroad. And now he’s confessing [in the accountability court seized with the assets-beyond-means case] that he’d told a lie in the house by seeking immunity from prosecution under Article 66 for his speech instead of denying his statement,” Mr. Ahsan told the media.

The veteran politician statement’s while at the same time criticizing the government but also shows a divide among the opposition. Aitzaz did not stop from attacking the PML-N leadership over corruption charges as well as dampen down criticism of the 100-day performance of the government. This may point to differences within the opposition that have still persisited despite ample opportunity of mutual interests.

Pompeo warns of China risks ahead of US-India talks