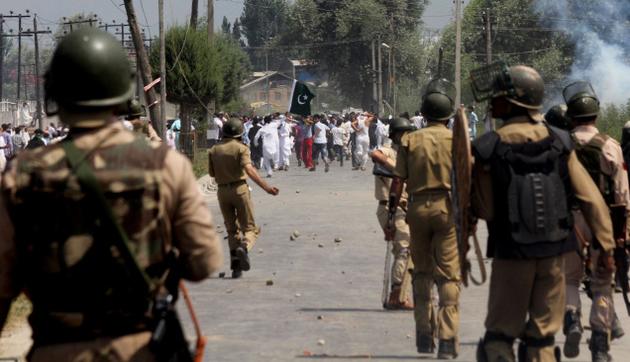 Dr. Maleeha Lodhi, the Pakistan envoy to the United Nations while repudiating Indian allegations on Pakistan in the 72nd Session of the United Nations General Assembly (UNGA) showed a picture of a girl bruised badly by Indian forces’ use of the pellet guns.

The Indian media and Indian Twitterati were quick to allege that the photograph was of a 17-year-old Gazan woman named Rawya Abu Jom, who had been injured by shrapnel during an airstrike by Israeli forces. The Indians have not covered the speech but only the allegedly wrong photograph.

While the status of the photo is still controversial it doesn’t take away anything from the hard-hitting yet logical speech of Dr. Lodhi. Regardless of the veracity of the picture, which one can go on to term as a clerical error, her references to the indiscriminate use of force of various kinds and types are veritable. The Indian state apparatus is continually embroiled in violence in the Kashmir; there are pictorial and video evidence galore to verify the claims.

It is also poignant to mention that the affected people are not even so-called militants; school-going children, mothers, and daughters do not even pose a challenge of self-defense to the Indian forces.

Read more: Beijing calls for talks on Kashmir but…

There is also no denying the fact that the whole Northern Command of the Indian Army is deployed in the valley. The so-called efforts of WHAM Plus on part of the Indian Army have failed to produce the desired results since the Indian Army’s authority on the streets is constantly being challenged the gritty Kashmiris.

However, the premier Indian Newspaper, the Hindustan Times rightfully said that pellet woes in the valley were real.”Data from Kashmir’s hospitals show over 6,000 people – including children as young as four and teenaged girls – had suffered pellet injuries, with over 1,100 hit in the eyes. Amnesty International says at least 14 people were killed due to it in during the unrest,” the article pointed out.

Dr. Lodhi slammed India for picking up on the issue, terming it as a depiction of desperation. She tweeted: “Always on the frontlines ready to take a bullet for the motherland, the attack on me just shows how desperate our neighbor is.”

Always on the frontlines ready to take a bullet for the motherland The attack on me just shows how desperate our neighbor is https://t.co/A0DYKp85Tu
— Maleeha Lodhi (@LodhiMaleeha) September 25, 2017

Pakistan flayed India in its third right of reply. “Once again chosen to divert the attention of the international community from the real issue ─ the real issue of human life, of human eyes, of children and infants blinded forever, of women raped and elderly killed every day by the reign of brutality unleashed by occupation forces in Indian-occupied Jammu and Kashmir,” said the Pakistani representative in the UN.

“Kashmiris will never be defeated. They will take bullet after bullet, pellet after pellet, but they will never give up” – Pakistan at #UNGA pic.twitter.com/0xb8KY8qhZ
— PTV News (@PTVNewsOfficial) September 25, 2017

Besides, whatever Dr. Lodhi said in the speech is corroborated by historical and current events; if at all the photo is a fake one, it still doesn’t exonerate Delhi of heinous brutalities in Kashmir or subversive activities inside Pakistan.

Early elections: Another round of media hype

Could Xi Jinping’s presidency for life lead to the decline of the communist party in China?

Is Pakistan going to transfer the management of Kartarpur corridor?