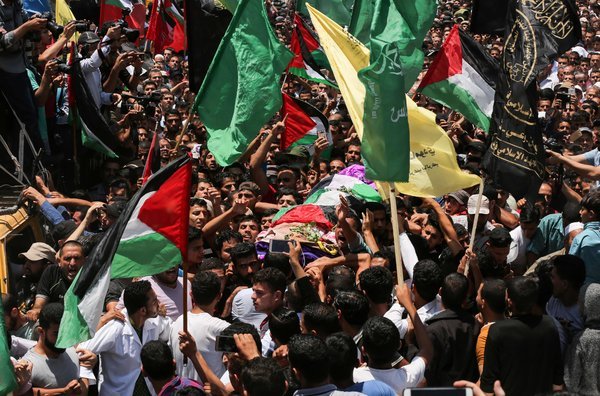 At least two people were killed in clashes with Israeli troops on Friday when thousands of Palestinians demonstrated against U.S. President Donald Trump’s recognition of Jerusalem as Israel’s capital and the Palestinian president said Washington could no longer be a peace broker.

Across the Arab and Muslim worlds, thousands more protesters took to the streets on the Muslim holy day to express solidarity with the Palestinians and outrage at Trump’s reversal of decades of U.S. policy.

France said the United States had sidelined itself in the Middle East. “The reality is they are alone and isolated on this issue,” Foreign Minister Jean-Yves Le Drian said.

Israeli soldiers shot dead a Palestinian man near the Gaza border, the first confirmed death in two days of unrest. Scores of people were wounded on the “Day of Rage”. A second person later died of their wounds, a Gaza hospital official said.

The Israeli army said hundreds of Palestinians were rolling burning tyres and throwing rocks at soldiers across the border. “During the riots IDF soldiers fired selectively towards two main instigators and hits were confirmed,” it said.

Read more: Trump-Netanyahu bromance and the dismal future for Palestinians

More than 80 Palestinians were wounded in the occupied West Bank and Gaza by Israeli live fire and rubber bullets, according to the Palestinian Red Crescent ambulance service. Dozens more suffered from tear gas inhalation. Thirty-one were wounded on Thursday.

As Friday prayers ended at the Al Aqsa mosque in Jerusalem, worshippers made their way toward the walled Old City gates, chanting “Jerusalem is ours, Jerusalem is our capital” and “We don’t need empty words, we need stones and Kalashnikovs”. Scuffles broke out between protesters and police.

In Hebron, Bethlehem and Nablus, dozens of Palestinians threw stones at Israeli soldiers who fired back with tear gas.

As a candidate he proposed banning all Muslims from entering the United States, and in office he has tried to block entry by citizens of several Muslim-majority states.

In Gaza, controlled by the Islamist group Hamas, calls for worshippers to protest sounded over mosque loudspeakers. Hamas has called for a new Palestinian uprising like the “intifadas” of 1987-1993 and 2000-2005, which together saw thousands of Palestinians and more than 1,000 Israelis killed.

“Whoever moves his embassy to occupied Jerusalem will become an enemy of the Palestinians and a target of Palestinian factions,” said Hamas leader Fathy Hammad as protesters in Gaza burned posters of Trump. “We declare an intifada until the liberation of Jerusalem and all of Palestine.”

Protests largely died down as night fell. Rocket sirens sounded in southern Israeli towns near the Gaza border, and the Israeli military said it had intercepted one of at least two projectiles fired from Gaza. No casualties were reported.

Al Aqsa Martyrs’ Brigade, a militant group linked to Abbas’s Fatah party, claimed responsibility for firing one of the rockets, and said it was in protest against Trump’s decision. The military said another rocket hit the Israeli town of Sderot. No casualties were reported.

Israel annexed after capturing it in the 1967 Middle East War, to be occupied territory. It includes the Old City, home to sites considered holy to Muslims, Jews and Christians alike.

Israel’s military said that in response to the rocket fire, its aircraft bombed militant targets in Gaza and the Palestinian Health Ministry said at least 25 people were wounded in the strikes, including six children.

The Israeli military said it had carried out the strikes on a militant training camp and on a weapons depot. Witnesses said most of the wounded were residents of a building near the camp. At the United Nations, U.S. ambassador to the United Nations Nikki Haley said Washington still had credibility as a mediator.

“The United States has credibility with both sides. Israel will never be, and should never be, bullied into an agreement by the United Nations, or by any collection of countries that have proven their disregard for Israel’s security,” Haley told the U.N. Security Council.

“We reject the American decision over Jerusalem. With this position the United States has become no longer qualified to sponsor the peace process,” Abbas said in a statement. He did not elaborate further. France, Italy, Germany, Britain and Sweden called on the United States to “bring forward detailed proposals for an Israeli-Palestinian settlement”.

Trump’s announcement on Wednesday has infuriated the Arab world and upset Western allies. The status of Jerusalem has been one of the biggest obstacles to a peace agreement between Israel and the Palestinians for generations.

Israel considers all of Jerusalem to be its capital. Palestinians want the eastern part of the city as the capital of a future independent state of their own. Most countries consider East Jerusalem, which Israel annexed after capturing it in the 1967 Middle East War, to be occupied territory. It includes the Old City, home to sites considered holy to Muslims, Jews and Christians alike.

For decades, Washington, like most of the rest of the international community, held back from recognising Jerusalem as Israel’s capital, saying its status should be determined as part of the Palestinian-Israeli peace process. No other country has an embassy there.

The Trump administration argues that the peace process has become moribund, and outdated policies need to be jettisoned for the sides in the conflict to make progress. Trump has also noted that Barack Obama, George W. Bush and Bill Clinton all promised as candidates to recognise Jerusalem as Israel’s capital.

“I fulfilled my campaign promise – others didn’t!” Trump tweeted on Friday with a video montage of campaign speeches on the issue by his three predecessors.

Read more: Is Trump’s recognition of Jerusalem just to boost popularity amongst conservatives?

U.S. Secretary of State Rex Tillerson said on Friday it would still be up to the Israelis and Palestinians to hammer out all other issues surrounding the city in future talks.

More than 80 Palestinians were wounded in the occupied West Bank and Gaza by Israeli live fire and rubber bullets, according to the Palestinian Red Crescent ambulance service. Dozens more suffered from tear gas inhalation.

“With respect to the rest of Jerusalem, the president … did not indicate any final status for Jerusalem. He was very clear that the final status, including the borders, would be left to the two parties to negotiate and decide.”

Still, some Muslim countries view the Trump administration’s motives with particular suspicion. As a candidate he proposed banning all Muslims from entering the United States, and in office he has tried to block entry by citizens of several Muslim-majority states.

Death to the Devil

In Ramallah, the seat of Abbas’s Palestinian Authority, the leader’s religious affairs adviser said Trump’s stance was an affront to Islam and Christianity alike. “America has chosen to elect a president who has put it in enmity with all Muslims and Christians,” said Mahmoud al-Habbash.

In Iran, which has never recognised Israel and supports anti-Israel militants, demonstrators burned pictures of Trump and Israeli Prime Minister Benjamin Netanyahu while chanting “Death to the Devil”.

In Cairo, capital of Egypt, a U.S. ally which has a peace treaty with Israel, hundreds of protesters who had gathered in Al-Azhar mosque and outside in its courtyard chanted “Jerusalem is Arab! O Trump, you madman, the Arab people are everywhere!”

France said the United States had sidelined itself in the Middle East. “The reality is they are alone and isolated on this issue,” Foreign Minister Jean-Yves Le Drian said.

Previous articleHow will rising extremism in Pakistan affect its ties with the US?
Next articleWhat’s inside World’s Most Luxurious Prisons?

18 September 2021
Previous articleHow will rising extremism in Pakistan affect its ties with the US?
Next articleWhat’s inside World’s Most Luxurious Prisons?

Trump fired US Attorney General for not enforcing immigration ban

Has Trump’s game plan on Iran been successful?