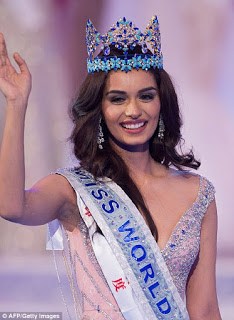 In its 67th edition, Manushi Chillar of India was crowned ‘Miss World 2017′ on 18th November. This is the first time in 17 years, the title of ‘Miss World’ comes back to India. Priyanka Chopra was the last to win this title for India in 2000.

The contest was held in China in which contestants from 108 countries attended the event. The second runner-up Stephanie Hill was from Britain. Alma Andrea, from Mexico, was the first runner-up.

“The happiest moment of my life was when they announced the winner is #India” -> https://t.co/Mc2mX5fAHT @feminamissindia pic.twitter.com/CfT0tw3r2y

My SandArt at Puri beach to Congratulate #ManushiChhillar on being crowned the #MissWorld2017. You have made India proud. pic.twitter.com/exa6SQPgMj

“I am so happy that I have done my nation proud and I am very excited to begin a new journey! Thank you everyone for all the wishes, means the world to me.” – Miss World Manushi Chhillar #MissWorld2017 #MissWorldManushi @ManushiChhillar @MissWorldLtd pic.twitter.com/60tIgcZ25a

Best wishes to Manushi Chhillar for winning the Miss World title. May this inspire every young woman in our country to achieve her dreams, in whichever field she chooses

I would like to take this opportunity to thank Mr @vineetjaintimes MD Times Group @timesofindia & @feminamissindia organization, @MissWorldLtd chief, #JuliaMorley, my family & last but not the least to all the lovely people out there who had faith in me! #Gratitude #MissWorld2017 pic.twitter.com/JuqHgnnNvX

And we have a successor!Congratulations @ManushiChhillar on becoming #MissWorld2017.. cherish and learn, and most importantly enjoy it.Bravo

20-year old medical student Manushi Chhillar is the sixth Indian winner for the pageant following the footsteps of Priyanka Chopra and Aishwarya Rai.

Chhillar is a trained classical dancer who also enjoys painting and hopes to open a chain of non-profit hospitals in the rural areas of India.

Following her win Miss World, Manushi Chhillar said, “Thank you, everyone, for your constant love, support, and prayers,” she wrote on Twitter. “This one’s for India.”

Stephanie del Valle of Puerto Rico crowned the Lady Chhillar with the title. Her victory rapidly became a top Twitter trend. Priyanka Chopra along with other Indian state ministers congratulated her on the victory.

In the competition’s 67-year history, both India and Venezuela hold the record for the highest number of wins with six titles each.

In the final round, Chhillar was asked about the lessons she would take back after spending a month with 30 contestants.

The winner replied, “Throughout the journey, I had a vision and with this came a belief, I can change the world.”

Fatima Bhutto’s ‘The Runaways’ to hit the shelves in October

Pakistan’s Foreign Policy: A tale of fear and resistance to change !