8 ways Iran could respond to Trump 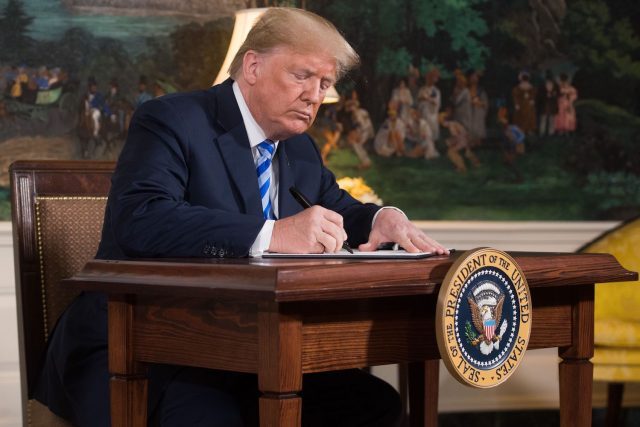 There is nothing permanent in the arena of global politics. Few developments could illustrate that better than the US withdrawal of the Iran deal. On 8th of May, President Trump torpedoed the Iran deal. This aggressive bid is a mixed blessing. It will help Trump win popular support from right-wingers. But, on the other hand, the move will not only sow dissension among the US and its western allies but will also isolate the US diplomatically. Though, the withdrawal is aimed at administering a regime change, shaping a chaotic regional order.

NDAA a Major Hurdle for the West

It is difficult for the western allies to remain party to the deal. It was evident that the day Trump would withdraw from the deal, some provisions of the 2012 US National Defence Authorization Act (NDAA) will come into play. According to the act no firm or financial institution can do business with Iran’s Central Bank, and buy Iranian oil. In case of violation, the subject state would immediately face U.S. secondary sanctions and should, therefore, cut off from the U.S. banking system.

How could Iran Respond?

Iran could respond with a range of options as following:

Iran may actively lobby against the United States, and question US legitimacy to fulfill its international commitments. It may raise the issue in the United Nations to further isolate the US diplomatically. It also may invest in the western media to project US stubbornness regarding the deal.

Iran may strategize to sow dissension among the US and its western allies, which primarily are the advocate of the Iran deal. This requires active diplomacy, and lobbying abroad.

Iran may covertly lobby its right-wingers to pressure the government of Iran to invest more on its nuclear program. This is will help Iran win public opinion, consensus at home, and it will also allow Iran to secure its domestic politics.

Iran may at earliest talk to North Korea. Both can jointly question US legitimacy at the international forums to fulfil its commitments.

Iran may invest more to expand its influence in the region. This may help Iran to generate some revenue from abroad. However, it should also invest in strengthening its internal security, as the next US move may be the regime change or engineering revolution, by putting Iranian people in extreme poor economic and living conditions.

As some provisions of the NDAA will come into play, except the few Iran will hardly find any state which can resist US sanctions. Germany, France, India and some western countries are one of them. Trump may not afford to sanction these states, even if they continues to trade with Iran. Therefore, Iran may further better its relations with them.

However, Trump administration is much worried about Iran’s growing regional influence and is trying to engineer regime change. Speaking to a seminar, US permanent representative to the United Nations Nikki Hailey said, ‘You can look at any place in the Middle East where there are problems, and there are Iranian tentacles there’.

Nevertheless, US withdrawal to an international agreement means that powerful states enjoy violates the arms control by virtue of their powerful allies and however, the small states are bound by their commitments to non-proliferation. Yet, the hard fact is that the congress still remains a hurdle for Trump as the withdrawal gives the lawmakers 60 days for the approval.

The writer works at the Centre for International Strategic Studies, Islamabad. The views expressed in this article are author’s own and do not necessarily reflect the editorial policy of Global Village Space.

How will Iran retaliate to Soleimani killing?