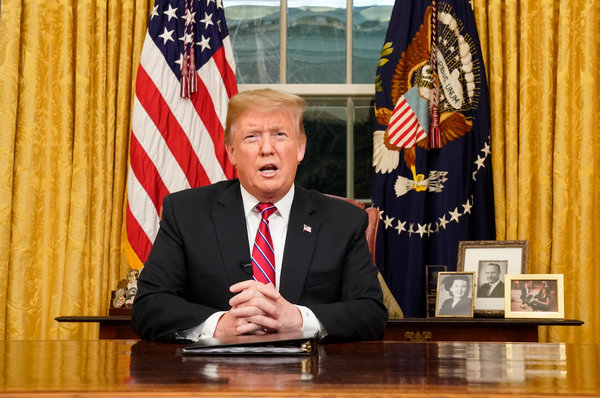 On Sunday, President Donald Trump gave a speech addressing the Muslim world in Riyadh. His first address on his first foreign visit revealed a drastic change in tone towards the Islamic faith. Previously, on the campaign trail, Trump had characterized all Muslims as enemies of the American way of life. Now, however, his views have adopted marked sobriety. We have extracted the consequential aspects of his speech and have compiled them so that readers may have an accurate picture of the latest American policy concerning the Muslim world.

Trump kicked off his speech by acknowledging the gargantuan arms deal he had sealed with Saudi Arab. The deal constitutes of a $400 billion investment in infrastructure and defense and is spread over 10 years with an immediate $110 billion purchase from U.S defense companies.

“We signed historic agreements with the Kingdom that will invest almost $400 billion in our two countries and create many thousands of jobs in America and Saudi Arabia. This landmark agreement includes the announcement of a $110 billion Saudi-funded defense purchase — and we will be sure to help our Saudi friends to get a good deal from our great American defense companies. This agreement will help the Saudi military to take a greater role in security operations” said the President.

Read more: Air Force One lands in Riyadh: Trump’s distraction from the controversies at home?

The focal point of President Trump’s speech was the condemnation of terrorism. He addressed all the leaders present and asked them to band together to oust the barbaric ideology which had ravaged the region.

An interesting aspect of President Trump’s speech was that he failed to mention Pakistan as an ally in the War against terrorism. He went to great lengths to acknowledge the states who were fighting against terrorism and also mentioned those who had been victim to terrorism. In both instances, Pakistan was left out.

Trump on victims of terrorism:

“The nations of Europe have also endured unspeakable horror. So too have the nations of Africa and even South America. India, Russia, China and Australia have been victims.”

On allies in the war against terrorism:

“Jordanian pilots are crucial partners against ISIS in Syria and Iraq. Saudi Arabia and a regional coalition have taken strong action against Houthi militants in Yemen. The Lebanese Army is hunting ISIS operatives who try to infiltrate their territory. Emirati troops are supporting our Afghan partners. In Mosul, American troops are supporting Kurds, Sunnis, and Shias fighting together for their homeland. Qatar, which hosts the U.S. Central Command, is a crucial strategic partner. Our longstanding partnership with Kuwait and Bahrain continue to enhance security in the region. And courageous Afghan soldiers are making tremendous sacrifices in the fight against the Taliban, and others, in the fight for their country.”

A few clues can be gleaned from this address indicating the direction of Trump’s foreign policy concerning Middle East. He said that “wherever possible, we [America] will seek gradual reforms — not sudden intervention.” How this statement translates to policies regarding U.S drones and the presence of American Navy in the region is not yet clear.

A new agreement was presented which called for all nations represented in the summit to actively target elements in their respective territories which are involved in the financing of terrorism.

“I am proud to announce that the nations here today will be signing an agreement to prevent the financing of terrorism, called the Terrorist Financing Targeting Center — co-chaired by the United States and Saudi Arabia, and joined by every member of the Gulf Cooperation Council. It is another historic step in a day that will be long remembered.”

Trump also announced the opening of “Global Center for Combating Extremist Ideology” the purpose and role of which is unclear.

Trump strongly condemned Iran and its role in backing terrorism. He has previously criticized the Iran nuclear deal and has become increasingly hostile towards the state. He said that Iran’s backing of Assad in Syria had allowed the dictator to remain in power and persecute the citizens of Syria. He clarified that it was the Iranian establishment which was responsible for “conflict and terror”, not the Iranian people. His strong-worded statement on Iran:

“No discussion of stamping out this threat would be complete without mentioning the government that gives terrorists all three—safe harbor, financial backing, and the social standing needed for recruitment. It is a regime that is responsible for so much instability in the region. I am speaking of course of Iran.

From Lebanon to Iraq to Yemen, Iran funds, arms, and trains terrorists, militias, and other extremist groups that spread destruction and chaos across the region. For decades, Iran has fueled the fires of sectarian conflict and terror.”

Terrorism, conflicts, and humiliation: What else will “Trump’s world” offer?

All new Toyota Venza 2021 Hybrid hitting US dealerships in August