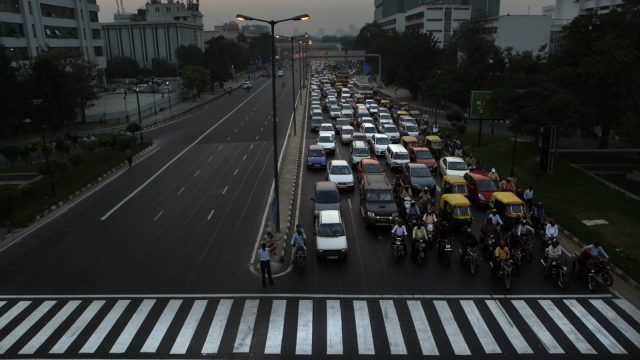 Every society has its exclusive set of obsessions normally ranging from sports, movies, religion, social norms, and food to politics etc. While globalization has more or less standardized these to all parts of the world, still some practices continue to evolve and embed into an acceptable domain of a society without realization of its ripple effects.

Apart from cricket and politics, it appears we have a new obsession on the scene visible in all tiers of society. From slums to villages, from posh urban areas to middle-class neighborhoods, from markets to local bazaars, from carpeted roads to muddy tracks.They are everywhere, they are functional, they are an acceptable norm and they are effectively making their presence felt……they are known as Speed Breakers. Speed breakers have been rampant on Pakistani roads since the past decade.

Standing up to what’s right is the key to forcing better and effective implementation of rules / law. Though, sadly, we do not have many role models politically to lead the mindset change despite having the best possible example religiously, the transformation has to commence from somewhere.

Over the years, I have observed the evolution of speed breakers on Pakistan’s roads. Their placement, material, and shape have constantly changed, almost keeping pace with Wi-Fi technology. From poorly constructed single brink humps to relatively oval shape pieces of crude art, from oblique placement on roads to slightly tapered, from uphill to downhill, from black & white to yellow & black, from marked to unmarked, metal segments to streamlined metal half cut tubes, from few inches to huge pimples, from metal to hard rubber, from dull to shining and reflectors, from official to self-help basis. They encompass a full spectrum of agony enveloping all segments of road users.

Digging deep into this phenomenon, one realizes that this obsession is not without valid reasons spread to many other aspects. Magnanimity of vehicle leasing agencies, flooding of vehicles on roads, illiteracy and poor substance of drivers, road widths, poor management and implementation of rules, checkpoints, mushrooming of private schools and academies, non-existence of school bus culture, hurrying tendencies forcing drivers to look for diversions from residential areas and last but not the least, mostly a social status demanding one person one vehicle statement.

Though all these aspects do exist and have definitely played a role in creating road havoc, still our obsession has gone much beyond its acceptable limits. Other than major roads, all streets, link roads see these bumps mostly surfacing overnight on personal whims.

The funniest, as well asthe most antagonizing aspect of this speed breaker apocalypse, is that ttravelingsurfaces which are miles apart from anything known as the smooth surface, already having strategically placed depressions which provide absolutely effective speed breaking (not sure why walking pace of car must be further slowed down). Small shopkeepers, house owners near relatively wider streets have constructed these art structures out of their own pocket in order to impede speeding platforms on the plea of safety!

While globalization has more or less standardized these to all parts of world, still some practices continue to evolve and embed in to acceptable domain of a society without realization of its ripple effects.

High-end vehicle brands such as Ferrari, Lamborghini, Bugatti, and Porsche would never dare to venture on our roads, as the expected sight of million dollars machine stuck up in the air due to few hundred rupees construction cannot be a soothing sight or even a big marketing opportunity.

Other than giving heart burns to car owners and drivers, these have negatively impacted the overall traffic profile. Sadly, an excess has created a bottleneck issue rather helping road management. This costs nation much more in fuel import bills, delays ambulances and other services, consumes more individual time and still not avert accidents. As per national statistics, road accidents increased from 7800 to 9200 in 2015/16 from previous year involving 10,600 vehicles.

In India alone, speed breakers are estimated to be responsible for almost 10,000 deaths each year. Speed breakers in West are also calculated to delay ambulances and fire trucks for 3-5 seconds per structure (Let’s not venture in to calculate our data).One newly constructed residential complex in a highly rated brand of housing societies (Rawalpindi) has more than 15 speed breakers within a radius of approximately 600-meter squares. Rest in peace driving.

They cause discomfort and back injury to drivers and passengers. This also includes those traveling on buses who may be walking down aisles or using the stairs, causing them to fall and injure themselves. They cause vibration when vehicles navigate them and send shockwaves through the ground. This has been proven to damage nearby properties. In fact, the official UK regulations state that they may not be implemented anywhere within 25 meters of bridges, subways or tunnels.

A bigger question however remains, does this tendency reflects a national mindset?Which is to create hurdles rather than to improve, short-term measures and poor management over long-term concrete steps, knee-jerk reactions rather than planning?

These all seem to have played a part in this phenomenon in varying ratios.  Apparently, the answer is YES, however, we do have glimpses of organized and planned behavior at limited places. This reflects that our issues are related to stricter implementation and management and definitely not capability.

High end vehicle brands such as Ferrari, Lamborghini, Bugati and Porcshe would never dare to venture on our roads, as the expected sight of million dollars machine stuck up in air due to few hundred rupees construction cannot be a soothing sight or even a big marketing opportunity.

Masses have not resisted to the local buildups of speed breakers and prefer to show remarkable clutch control to surmount the hurdles. A“Jugaar” approach mastered by Ustaad Gee indeed. This is a testimony of our indifference and cannot be labeled as a character trait of national resilience by any measure. We as a nation must learn to resist righteously, may the issue be of petty nature or national stature, and may the issue create impact locally or question our ethics and morals.

Standing up for what’s right is the key to forcing better and effective implementation of rules/law. Though sadly, we do not have many role models politically to lead the mindset change despite having the best possible example religiously, the transformation has to commence from somewhere. That somewhere lies in you….Let speed breakers be the taboo breakers. Let speed breakers break the web of social ills…Let the speed breakers be the first step. A first step to changing perspectives, mindsets and unlearning the negatives. Till the time that happens watch out for unexpected hump and drive slow….God Speed.

Amjad Mahmood holds a Masters Degree in Strategic Studies from National Defence University, Islamabad. He has varied interests from politics, music, sports to strategy. A pilot by profession, but occasionally contributes on interesting topics. He tweets @Flyingtastic. The views expressed in this article are authors own and do not reflect the editorial policy of Global Village Space.

Will Baluchistan get its rights in Naya Pakistan?