The explosive exploded in the mouth of a 15-year-old pregnant elephant. The pregnant elephant died in Kerala from the injuries of the crackers. The wild elephant walked for days with injuries in pain before it went into the river and died standing on May 27th. 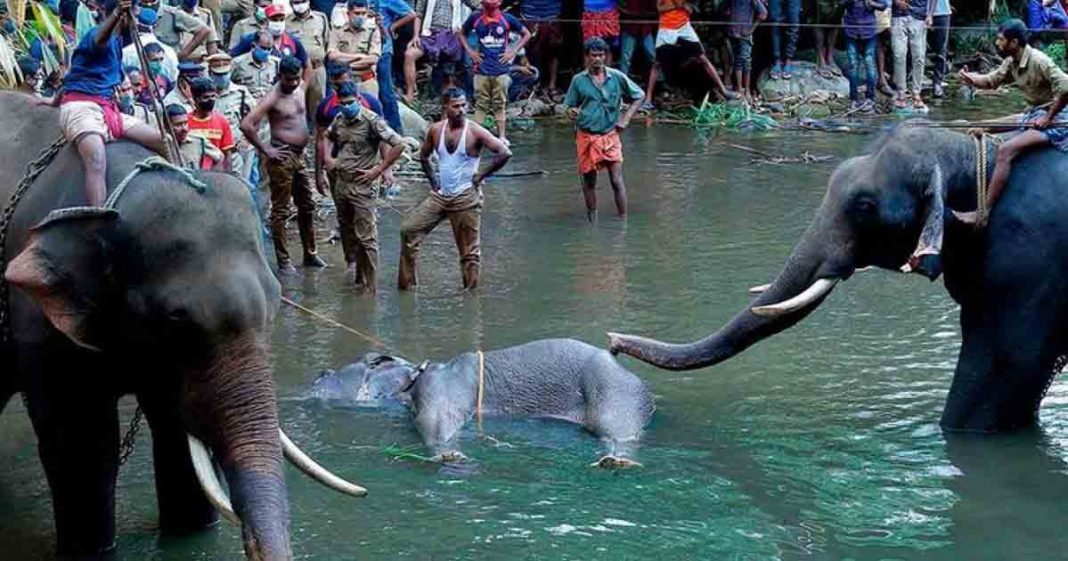 The explosive exploded in the mouth of a 15-year-old pregnant elephant. The pregnant elephant died in Kerala from the injuries of the crackers. While the wild elephant walked for days with injuries in pain before it went into the river and died standing on May 27th.

How the pregnant elephant died in Kerala

Mohan Krishan, a forest officer posted an emotional note on Facebook. “When we saw her she was standing in the river, with her head dipped in the water. Moreover, he added that she had a sixth sense that she was going to die. So the elephant took the Jalasamadhi in the river in a standing position,” wrote Krishnan, who had been tasked with rescuing the elephant.

Humanity dies 1,000 deaths.
Pregnant elephant brutally killed after fed fruit stuffed with crackers & dies with foetus in her stomach.
‘Called as God’s own country, but no space for revered animal?’

“She didn’t harm a single human being even when she ran in searing pain in the streets of the village,” he wrote.

Read more: Cher, American singer, turned out to be a fan of Imran Khan

“When the pineapple or some other fruit she ate exploded, she would have been shocked/worried not about herself,  it must’ve been about the child she was going to give birth to in 18 to 20 months,” Krishan commented further on the incident.

Also, the unconfirmed report says the pregnant elephant might have consumed explosive pineapple twenty days ago. However, forest officials believe this is an intentional act to kill the elephant

Indian celebrities and citizens protested the killing of the elephant from an alleged explosive pineapple. They have demanded immediate action the culprits.

Appalled to hear about what happened in Kerala. Let's treat our animals with love and bring an end to these cowardly acts. pic.twitter.com/3oIVZASpag

“Appalled to hear about what happened in Kerala. Let’s treat our animals with love and bring an end to these cowardly acts,” Kohli tweeted.

A pregnant elephant wandered into a village in Kerala in search of food. What do we humans do?? – we feed her pineapples stuffed with crackers. She died a painful death standing in the river trying to ease the burns in her mouth and tongue. Humans are so cruel. PERIOD #kerala pic.twitter.com/fH0BLxc6ig

Wicket-keeper batsman Rishabh Pant, too, vented his anger. “Heartbroken, speechless, angry & shocked to read the news about the pregnant elephant in Kerala,” he tweeted.

The investigation into the killing of the elephant

Kerala Chief Minister Pinarayi Vijayan assured they will take strict actions against those responsible for the elephant’s death.

“The forest department is probing the case and the culprits will be brought to book,” Mr. Vijayan said.

According to the Mannarkkad divisional forest officer said that the elephant might have come from Silent Valley National Park’s buffer zone. The officer anticipates the elephant died on a private land 300m from the Thiruvizhamkunnu forest section. “We have registered a case for killing the wild elephant but nobody has been arrested. We are waiting for the postmortem report to find out the exact cause of its death,” he said.

He added that the elephant might have consumed cracker stuffed pineapple which could have been placed to kill crop-raiding wild animals. Farmers are in the practice of keeping pineapples stuffed with pineapples to kill the wild boars that damage crops. But, torturing, trapping, killing, poisoning, or baiting wild animals is a punishable crime under the Wildlife Protection Act. Hence, the offender can face seven-year imprisonment and a fine up to ₹25,000.

#Elephant Deaths she was pregnant .she wonderd into a village searching for food . locals took a pineapple stuffed it with cracker, she Bileve them she ate it the cracker exploded, she was in pain she died standing in a river . #RIPHumanity pic.twitter.com/Krr9TozfLu

Moreover, the forest division has initiated a probe into the incident of the death of a pregnant elephant. Two organizations have announced a cash reward for anyone providing information for the arrest of the offenders.

Communal twist to the killing of a pregnant elephant in Kerala

Reportedly, several BJP apologists have given the death of the pregnant elephant in Kerala a communal twist. There is a conflict between social media users regarding the place where the pregnant elephant died. As many quoted a wrong district Malappuram- the Muslim majority areas in their tweet. A score of Indian social media users and sites quoted the incident happened in the Palakkad which according to them is the Hindu-majority area.

She exploded but didn't harm anyone. She went to the river and died quietly.

Now tell me about 100% literacy & who is majority in Mallapuram? https://t.co/lduCv2uUbW

Arun Pudur, a right-wing activist, too chose to write Malappuram district in his tweet giving the incident a communal color.

“In Kerala’s Malappuram, ba$tards fed a Pregnant Elephant Fed Pineapple Stuffed with Firecrackers. She exploded but didn’t harm anyone. She went to the river and died quietly. Now tell me about 100% literacy & who is a majority in Mallapuram?” he tweeted.

But, social media users claimed his argument bogus later. But, there were other right-wing activists including Maneka Gandhi who made similar claims in their tweets. Moreover, a score of Indian websites has reported that the Mallapuram district is 80Kms away from Palakkad.

Previous articleUN asks the US to end its ‘structural racism’ amid worldwide anger
Next articleIndia, a colossal washout in US versus China showdown

30 July 2021
Previous articleUN asks the US to end its ‘structural racism’ amid worldwide anger
Next articleIndia, a colossal washout in US versus China showdown