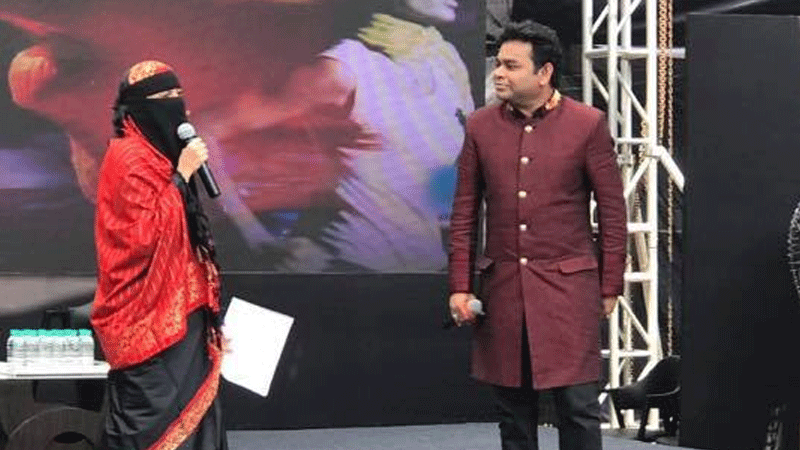 Indian music composer and Academy award winner A.R Rahman defended his daughter Khatija’s choice to wear the niqab as ‘freedom to choose’ after he received a backlash on social media.

Her daughter Khatija appeared in face veil in a recent event alongside him.

Read more: Wanted to be a part of the healing process of APS…

A.R Rahman took to Twitter and clapped back at the trollers. He shared the family pictures of his wife and two daughters with Nita Ambani on social media. The picture showed diversity between the women of his families. His wife Saira was seen covering her head. While among his two daughters, Khatija was seen fully covering herself while Raheema did not cover. The Oscar-winning musician shared the picture with a hashtag ‘Freedom to Choose’.

He captioned the picture “The precious ladies of my family with Nita Ambani ji.”

Khatija shared the stage in the event in Mumbai with A.R Rahman that was organized to celebrate the 10 years of ‘Slumdog Millionaire’. Khatija was invited to speak about the achievement and success of his father.

An excerpt from the post read: “The recent conversation of myself on stage with my dad has been doing the rounds, although I didn’t expect such an overwhelming response. However, there were certain comments which said that this attire is being forced by my dad and that he has double standards. I would like to say that the attire I wear or the choices I make in my life does not have anything to do with my parents. The veil has been my personal choice with complete acceptance and honor.”

“I’m a sane mature adult who knows to make my choices in life. Any human being has a choice to wear or do what he/she wants and that’s what I’ve been doing. Hence, kindly don’t make your own judgments without understanding the exact situation #FreedomOfChoice,” read the concluding part of the post.