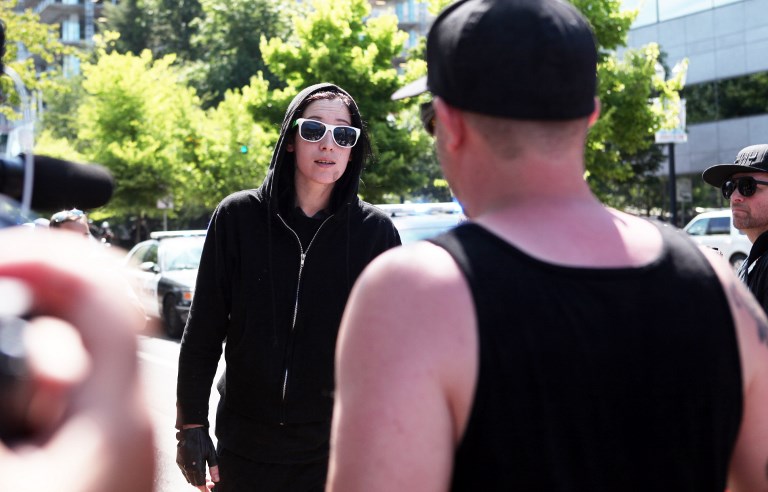 Exactly a year since torch-wielding neo-Nazis clashed with counter-demonstrators in a deadly protest that highlighted the growing boldness of America’s extreme right, white nationalists are set to rally outside the White House on Sunday. Organized by Unite the Right the same white supremacist network that called last year’s protest in Charlottesville, Virginia Sunday’s rally will once again see the extremists stand face-to-face with anti-fascists, who are staging a counter-protest in the same area.

Washington authorities have ramped up the capital’s emergency level to allow for additional resources to prevent violence, but some are bracing for a confrontation. “I don’t know exactly what will happen, but it probably will not be good,” tweeted Richard Spencer, a leader of the so-called “alt-right” movement, who said he would be staying away from the rally.

There was “blame on both sides” for the violence, condemning the anti-fascists who came “with clubs in their hands.” Neo-Nazis and members of the self-described “alt-right” movement were seen to be emboldened

They had gathered to protest efforts to remove statues of Confederate leaders, including one of the Confederacy’s top general, Robert E Lee. When the demonstrations continued on August 12, fighting broke out between neo-Nazi supporters and anti-fascists from a black-clad group called Antifa. The violence culminated with a man driving a car into a crowd of counter-protesters, killing a woman and injuring 19 people.

Blame on both sides

In the immediate aftermath, President Donald Trump drew broad criticism when he appeared initially reluctant to condemn the extreme right-wingers many of whom have rallied behind him since his election, including David Duke, a former KKK leader, an avowed racist and anti-Semite who praised Trump’s “courage” in defending white nationalist protesters.

Trump had said there was “blame on both sides” for the violence, condemning the anti-fascists who came “with clubs in their hands.” Neo-Nazis and members of the self-described “alt-right” movement were seen to be emboldened by Trump’s response after he failed to call any neo-Nazi groups out by name.

“White civil rights rally” aimed at protesting “civil rights abuse in Charlottesville.” In Washington, all firearms will be banned from the protest site, including those legally carried by licensed gun owners

Several openly racist or white nationalist candidates are seeking elected office this year including avowed Nazi Arthur Jones of Illinois, who won his district’s Republican party primary and is running for Congress. And in Wisconsin, Paul Nehlen, the leading Republican running to fill the seat in Congress currently held by retiring Speaker of the House Paul Ryan, has emerged as a leader of the alt-right movement.

“No one should be surprised. This is Donald Trump’s America. These are the forces he has unleashed,” said Richard Cohen, president of the Southern Poverty Law Center anti-bigotry group, in an open letter. “Rather than try to pull the country together after Charlottesville rather than examine the impact of his own rhetoric and actions, Trump has doubled down on the toxic xenophobia and fearmongering that has fueled his political life.”

The Law Center’s outreach director Lecia Brooks told AFP the rally reflected a “continued emboldened on the part of white nationalists in this country.” Organizers for Sunday’s event have called it a “white civil rights rally” aimed at protesting “civil rights abuse in Charlottesville.” In Washington, all firearms will be banned from the protest site, including those legally carried by licensed gun owners, officials said.

Rally organizers cautioned attendees not to react with anger against any counter-protesters. “There will certainly be provocateurs trying to get a reaction out of you by trying to stick cameras in peoples’ faces, yelling, etc,” the Unite the Right website stated. Unite the Right attendees were also encouraged to bring an American or Confederate Flag.

Read more: Trump Team’s Dark View of Islam: Where its coming from?

A permit for a counter-protest was granted Thursday to the Answer Coalition, a group that has urged “mass action” on Sunday to protest what it described as racists, fascists, neo-Nazis and white supremacists. Smaller anniversary events are planned in Charlottesville, ahead of which Virginia Governor Ralph Northam and city officials declared a state of emergency.