Abbasi back in action: LHC clears him to contest elections from NA-57 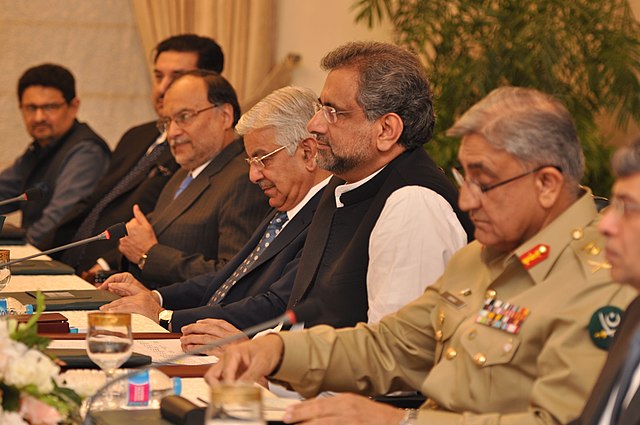 This clause was added by the military dictator Muhammad Zia-ul-Haq in an attempt to turn the legal system of the country toward Islamization.

The tribunal had also disqualified him for life. Abbasi challenged the verdict in LHC and denied that he was concealing facts and withholding information from voters” in his nomination forms submitted for NA-57.

Justice Ibadur Rehman Lodhi declared in his eight-page verdict that Abbassi is not eligible to become a member of the Parliament under Article 62 (1) (F) of the Constitution as he is not Sadiq and Ameen.

According to the article 62-1(f), “a person shall not be qualified to be elected or chosen as a member of Majlis-e-Shoora (Parliament) unless, he is sagacious, righteous and non-profligate, honest and ameen, there being no declaration to the contrary by a court of law.”

It was declared in the verdict that the value of his F-7/2 house in Islamabad as Rs0.3 million to obtain a loan of Rs25 million. Though, he obtained the loan but never declared his house in his nomination papers. It clearly violates the constitution.

PML-N and Abbasi lamented the judge on this verdict and claimed that the appellate court did not have the authority required to disqualify an individual for life.

Abbasi claimed that his father had bought the house for this amount in 1974 and he only mentioned the same purchase price in the nomination papers. He was disqualified for not valuing the property price based on market value, Abbasi remarked on the controversial verdict.

PTI’s central spokesperson, Fawad Chaudhary was also disqualified for life. It claimed that he had not declared the source of his 2017 income, which amounted to Rs9,600,000 according to his income tax returns that he had filed along with his nomination papers.

Moreover, the amount of Rs3,250,000 which he spent abroad was not mentioned in his tax returns.

Fawad denied this allegation and argued that tribunal had purposely ignored the copy certified by the Federal Board of Revenue along with his nomination papers for NA-67-Jhelum II.

It is not the first time that Article 62 (1) (F) has led to controversy. It is the same provision under which the former PM Nawaz Sharif and PTI’s former general secretary Jahangir Tareen were disqualified on July 28, 2017, and December 15, 2017 respectively. Both the leaders were deemed unfit to contest the polls for life.

On April 13, the Apex Court of Pakistan had ruled that lawmakers disqualified under Article 62(1)(f) of the constitution will be unable to contest elections for the rest of their life. This clause was added by the military dictator Muhammad Zia-ul-Haq in an attempt to turn the legal system of the country toward Islamization.

According to this much-criticized clause, the candidate should be truthful and trustworthy which arguably gives extra power to country’s courts to oust the elected politicians from the parliament.

PPP government had proposed the removal of this controversial clause but ironically, Nawaz opposed the other political parties. He argued that Islamic country’s ruler must be truthful and trustworthy to lead the country exemplary. Given the opposition from democratically elected governments to remove this clause, no one can be blamed for this bitter turn of events but themselves.

Previous articleWhat are Tehreek-e-Labbaik’s chances in 2018 elections?
Next articleECP to use “highest quality” ballot papers in elections 2018

17 September 2021
Previous articleWhat are Tehreek-e-Labbaik’s chances in 2018 elections?
Next articleECP to use “highest quality” ballot papers in elections 2018

PMLN’S Strategy to get PTI disqualified?