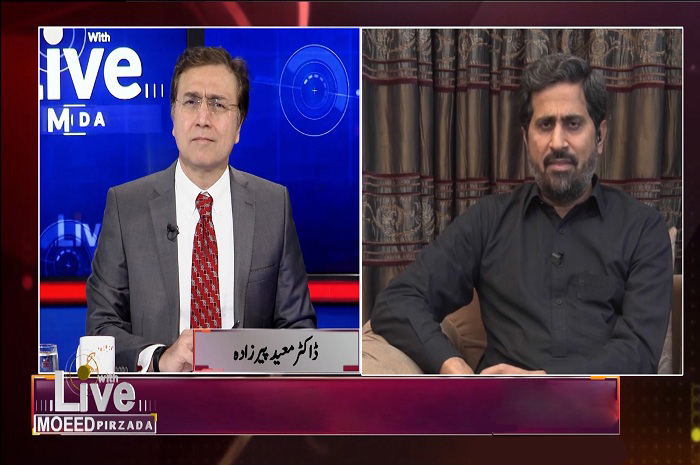 Expressing his concern at the murder of Senior MQM leader Ali Raza Abidi, Punjab’s information minister Fayyaz Ul Hassan Chauhan has said that this assassination could be an attempt to displace the news agenda which is focused on eradicating corruption. “Terrorism has its roots in financial misappropriation. For the first time in decades, Sindh’s leadership is under scrutiny. We don’t need to guess too much to know who is behind this”, Chauhan said.

He made these comments while speaking to Doctor Moeed Pirzada on his prime-time show “Live with Moeed Pirzada” at GNN. The Minister also said that foreign hands have also always wanted to disrupt the country which possesses tactical weapons, “Thankfully, all state institutions, government, and judiciary are on the same page. We will not let insurgency resurface”.

A postmortem examination showed that Abidi sustained four bullet wounds, two on his chest, one on his neck and as many on his arm.

Senior analyst and expert on Karachi’s political affairs Mazhar Abbas said that there is a new rising trend of insurgency in Karachi “The new trend is not being taken seriously by security establishment and the government. Karachi is a vulnerable large city with a never-ending threat of new groups emerging”.

Abbas also said that security agencies quickly deduce a conclusion which is a problem, “There are ever changing dynamics of the city with emerging groups and Karachi’s security alert should not ever be let down because, in a city of that size, gun culture cannot be rooted out”.

Senior MQM leader and former member National Assembly Ali Raza Abidi was assassinated in a deadly attack outside his residence on the evening of 25th December 2018. Two unidentified assailants riding a motorcycle opened fire on Abidi’s car near his residence on Khayaban-e-Ghazi Street in DHA’s Phase V, according to Station House Office Gizri Asad Mangi.

As per reports, Abidi was alone in his car when the attack took place and was taken to PNS Shifa hospital by his father, Akhlaq Abidi, where the former MQM leader succumbed to his injuries during treatment. A postmortem examination showed that Abidi sustained four bullet wounds, two on his chest, one on his neck and as many on his arm.

This comes two days after two Pak Sarzameen Party (PSP) workers were gunned down in Usmania Society. Earlier this month, six people were wounded when a low-intensity blast hit an MQM’s Milad gathering in Gulistan-e-Johar.

In the 2018 general elections, Ali Raza Abidi had contested against Imran Khan in NA-243, Karachi. According to news publications citing sources, he was on the hit list of sectarian outfits.

Former MQM-Pakistan chief Farooq Sattar while talking to reporters after Abidi’s demise said: “[he] was like my children. We had raised him with our own hands, he was Pakistan’s future. With what cowardice and coldness he was targeted and martyred.”

Bangladesh: Why Nawaz Sharif has a poor understanding of history