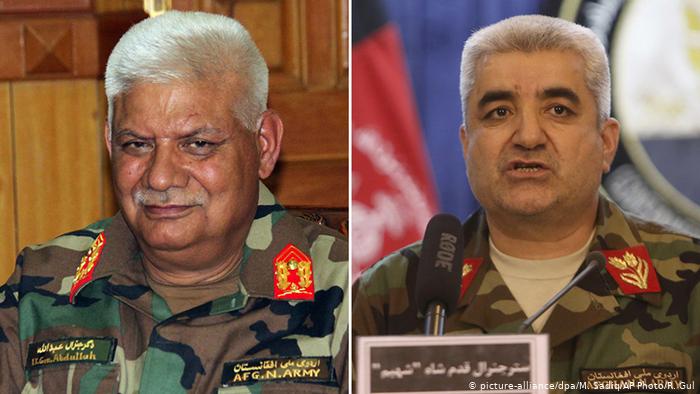 The Afghan defense minister and the Afghan army chief resigned on Monday, a few days after one of the most terrifying Taliban attacks on the 209th Army Corps, the country’s largest military base, killed over an estimated 200 soldiers. It resulted in calls for senior officials to step down from their respective positions. USA based watchdog, SIGAR, has reported, that last year saw casualties among Afghan security forces soared by 35 percent and over 6,700 Afghan security forces were killed.

A statement by the Afghan Presidential palace narrated, “President Ashraf Ghani has accepted the resignation of the defense minister and army chief of staff,”

Angry Afghans had called for the resignations of the defense minister Abdullah Habibi and chief of the army staff Qadam Shah Shahim, among other officials, to take responsibility for the loss of lives.  The Taliban assault happened on Friday, just outside the northern city of Mazar-i-Sharif, a city which is usually considered safe and not part of traditional Taliban stronghold areas. Ten gunmen dressed in military uniforms and armed with suicide vests entered the base in army trucks and opened fire at unarmed troops at close range in the mosque and dining hall for over 5 hours.

Sunday was a day of mourning for those who died in Friday’s attack, with flags flown at half-staff.

Read more: Afghan Army’s biggest set back: Has Trump’s ‘Mother of all Bombs’…

Taliban spokesperson Zabihullah Mujahid said in a statement on Saturday the attack was retribution for the recent killing of several senior Taliban leaders in northern Afghanistan.

The attack came just over a week after the United States dropped a 22,000-pound bomb, known as the “mother of all bombs”, against the Islamic State fighters hiding in caves and tunnels in the Nangahar province of Afghanistan.

Read more:  “Mother of all bombs” kills 36 ISIS fighters: Is there more…

The exact toll from the assault remains unclear. Afghan officials have so far ignored calls to give a break down of the actual lives lost or injured. The United States initially reported a conservative number of at least 50 soldiers killed, which the Afghan government later confirmed as being 100, however, some local officials have put the number of dead alone as high as 200. A New York Times report came over the weekend that said the government had run short of coffins for the bodies. The actual number of deaths is being concealed for a number of reasons, including not propagating Taliban’s strength and power to kill significant numbers.

“Let’s face it, no matter how many troops you may send to Afghanistan it is going to be very difficult to end the war, we had 100,000 troops fighting in Afghanistan during height of the surge and we didn’t end the war,” said Michael Kugelman, a South Asia expert and the Woodrow Wilson Center.

The raid sheds a light on the Taliban’s growing strength. It has been over 15 years since they were ousted from power by US forces. Many Afghans slammed the government for its inability to counter the attack, the latest in a series of brazen Taliban assaults, the last one on the country’s largest military hospital in Kabul in March left dozens dead. Twelve army officers, including two generals, were sacked for negligence over that attack.

Military analysts have slammed the “total intelligence failure” over such assaults and called for new strategies to counter them.

Afghan security forces, beset by killings and desertions, have been struggling to beat back insurgents since US-led NATO troops ended their combat mission in December 2014.

Read more:  The US in Afghanistan: A tale of follies & miscalculations

According to a US government estimate in November 2016, the government has uncontested control of only 57% of the country, down from 72% a year earlier. Since then, Sangin has fallen in the south to the Taliban and many other regions are fiercely contested by various insurgent groups, as Kabul’s repeated bids to launch peace negotiations with the Taliban have failed.

US future decisions for Afghanistan

On Monday, US Secretary of Defense, General James Mattis arrived to Afghanistan as part of his regional tour, including Egypt, Saudi Arabia, Israel, Qatar, and Djibouti, to visit his counterparts. The aim of his tour has been to reaffirm key US military alliances and discuss cooperation to counter terrorism. He arrived after his counterpart had resigned in Afghanistan and met with President Ashraf Ghani. There is no need to be a fly on the wall to understand what was discussed. The Afghan government has been clear in asking for more US soldiers and longer US presence on ground to support it in its fight against the Taliban.

Afghanistan is still waiting for the enunciation of a clear US policy for the country especially after last weeks ‘mother of all bombs’ was targeted at ISIS; with Analysts saying that it also aimed to send an ostensible message to Russia as well. In February, the top US commander in the country, General John Nicholson, stated to a Senate Armed Services Committee that several thousand more US soldiers were needed. “Offensive capability is what will break the stalemate in Afghanistan.” Earlier this month, when the US National Security Adviser McMaster visited Kabul he clarified slightly by saying that officials would present Mr Trump with a “range of options”.

Saudi Arabia & Iran: A potential nuclear race in the making?