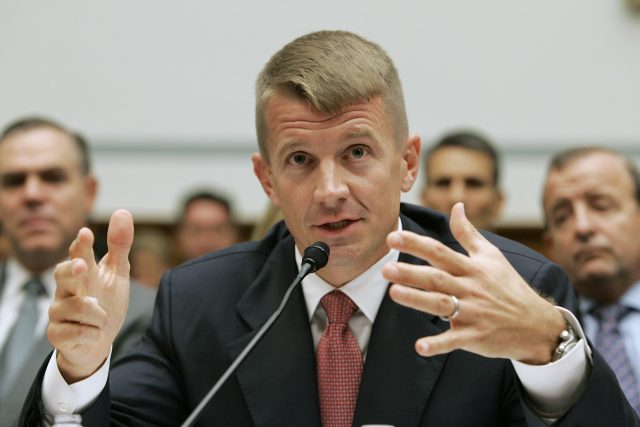 The incumbent government of President Ashraf Ghani has strongly reacted to the developing news that the USA might privatize the Afghan war, allowing the lowest bidder to deploy private contractors to carry forward the 17-year-old war.

President Ashraf Ghani, approaching presidential elections in April, has repeatedly rejected the proposal and on Thursday his national security adviser issued a statement condemning what he called a “destructive and divisive debate”.

The U.S and its allies are increasingly becoming weary of the long, arduous war which is a dent on the resources and has no clear objective or end in sight.

“Under no circumstances will the Afghan government and people allow the counterterrorism fight to become a private, for-profit business,” the statement said. Founder of Black Water Eric Prince is reported to be lobbying with the U.S and some of the Afghan lawmakers to allow the private military contractors to train the Afghan forces.

After President Obama decided to pull out the U.S troops, the NATO and particularly American boots on the ground in Afghanistan have been reduced considerably. After the President Donald Trump’s New South Asia Policy, an additional reinforcement of troops was sent to Afghanistan but the core objective was contingency measures because of incapacity of indigenous government forces.

The U.S and its allies are increasingly becoming weary of the long, arduous war which is a dent on the resources and has no clear objective or end in sight. In this context, a private contractor costs way less than a regular soldier, the reason the United States of America turned to companies like Black Water in Iraq war once the threat of Saddam Hussain was neutralized.

Private Contractors are generally the soldiers, most of them being Green Beret belonging to the elite special forces of the United States, who work after retirement and get paid by Private Agencies to provide security and assistance to government forces.

The internal U.S efforts to engage the Taliban through back-channel diplomacy in Qatar are also on their way.

In September 2017, when President Donald Trump announced his New South Asia policy, which the U.S special envoy for Afghanistan Richard Halbrook used to call “Af-Pak Strategy”, the idea to meeting the need of missing manpower in Afghanistan with Private contractors was first coined.

Since the Private Contractors are notorious for carrying out crimes and shooting civilians, as it happened in Iraq, the U.S administration decided to send the regular U.S troops instead. The United States currently has some 14,000 troops in Afghanistan, serving in the NATO-led Resolute Support training and advisory mission as well as in separate counter-terrorism operations against militant groups like Islamic State.

Read more: The War in Afghanistan: Curtains without Climax

Under the strategy announced just over a year ago, the extra troops and greatly increased air strikes against the Taliban are intended to force the insurgents to the negotiating table. Once the news started to resurface, the Afghan government has reacted angrily toward the development saying that it will be counterproductive.

The understanding is true to a great extent. Since the idea of Private Contractors employed by the private firms is profit oriented, it eliminates the zeal and reason, apart from money, necessary to fight a war. Secondly, because of the dark past which is associated with the private contractors, the U.S would lose legitimacy in the eyes of even those Afghans who are in the favor of U.S staying inside the country.

After fighting 17 years on a hostile terrain, it would be disastrous to hand over the war to retired soldiers, who are, most of the time, psychologically ineligible to be given a weapon.

Therefore, the Afghan government has taken a categorical stand against the very idea. Speaking half seriously, one senior security official said recently: “If they did that, even I would join the Taliban”. The U.S is trying to find its way out of Afghanistan via dialogue.

It has repeatedly asked Pakistan to facilitate the communication channel with the Taliban. The internal U.S efforts to engage the Taliban through back-channel diplomacy in Qatar are also on their way. But the pace of these developments suggests that the issue is still going to linger on for the next few years.

And since the western governments who are funding this war and almost entire Afghan budget do not want to prolong their loss, the out-of-box ideas like privatizing the war emerge. After fighting 17 years on a hostile terrain, it would be disastrous to hand over the war to retired soldiers, who are, most of the time, psychologically ineligible to be given a weapon.