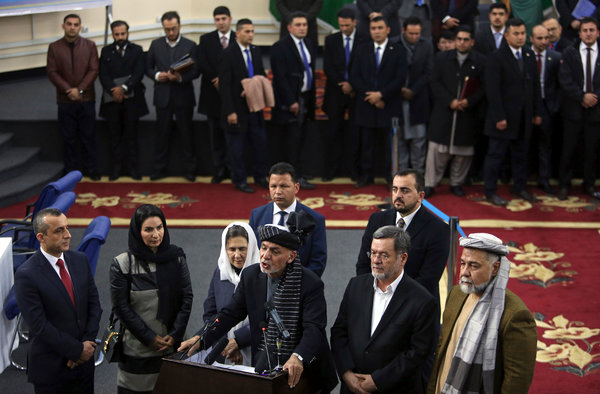 In order to bring about a negotiated political settlement to the simmering Afghan dispute, Afghanistan led the way and organized a conference under the auspices of a new peace initiative known as the “Kabul Process”.

The Afghan President Ashraf Ghani officially opened the conference in which representatives of 23 countries including Pakistan, USA, Russia, and China participated. This was the first attempt by the Afghan government to garner regional and international support for peace in Afghanistan.

The conference was held days after a massive blast jostled the capital and resulted in the death of 150 people.

All key stakeholders attended the one-day conference in the Afghan Capital. The US was represented by Deputy Assistant to the President and Senior Adviser for South and Central Asian Affairs at the NSA Lisa Curtis and Acting Special Representative for Afghanistan and Pakistan Laura Miller supported the new Afghan-led initiative. In a statement released by the US Ambassador in Afghanistan, the Afghan government was lauded for starting the Kabul Process.

“By gathering in Kabul a week after the attack, we made clear that the terrorists cannot stop the international and regional community from voicing their unequivocal supports for the Kabul process. The U.S. government agrees that the Kabul Process can provide an umbrella platform to take stock of and reinforce other diplomatic initiatives, and allow international stakeholders to discuss and commit to firm action to fight terrorism, seek avenues for peace, and promote regional connectivity,” said Ambassador Llorens on the Kabul Process in a statement.

China too extended wholehearted support for the process. “Peace and stability in Afghanistan are highly relevant to security and development of the neighboring countries and the region. As a close neighbor, China supports Afghanistan in conducting peaceful reconstruction and advancing reconciliation. The Foreign Ministry’s Special Envoy for Afghan Affairs Deng Xijun attended the Kabul Process conference yesterday. Along with other members of the international community, China stands ready to continue to play a due constructive role for an early realization of national and political reconciliation as well as peace, stability, and development in Afghanistan,” said Foreign Ministry Spokesperson Hua Chunying in a news briefing on Wednesday

The Taliban are holding about 58% of Afghan territory and are attacking Afghan and foreign forces with impunity.

The conference was held days after a massive blast jostled the capital and resulted in the death of 150 people.

President Ghani delivered the opening address to the participants and said that Afghanistan is a frontline state in the fight against terrorism.

Ghani extended an olive branch to the Taliban and implored them to join the political process. The proposal by the president comes at a time when it is becoming increasingly obvious that the state apparatus has been unable to stop the resurgence and intrusions of the Taliban. Apart from attacks across the country on soft targets, the Taliban continue to breach the defenses of the Afghan Army.

The Taliban are holding about 58% of Afghan territory and are attacking Afghan and foreign forces with impunity. After the deadly attack on 209 Corps headquarters in April which claimed lives of 150 Afghan soldiers, the Taliban carried out two attacks on military installations in Kandahar last month claiming the lives of 25 soldiers.

However, the president chose to ascribe everything on Pakistan, a country who was participating in the conference. Pakistan was represented by Additional Secretary Tasnim Aslam and the director general Afghanistan, Iran, and Central Asia at the Foreign Office.

While ignoring a massive security lapse, the Afghan political and military leadership squarely blamed Pakistan for the attack in the highly-secured diplomatic arena last week.

He said, “Afghanistan is suffering an “undeclared war of aggression from Pakistan”. He questioned Pakistan in his address. “What will it take to convince Pakistan that a stable Afghanistan helps them and helps our region?”

President Ghani expressed his distress and anguish on the motives of Pakistan. “Our problem, our challenge, is that we cannot figure out what it is that Pakistan wants,” he said.

Ties are being severed with Islamabad as Kabul is upping verbal diatribes against it. While ignoring a massive security lapse, the Afghan political and military leadership squarely blamed Pakistan for the attack in the highly-secured diplomatic arena last week.

“Pakistan is the key planner of this incident like in the past, but our security team is investigating the incident and these investigations have not been completed,” Tolo News quoted interior ministry spokesman Najib Danish.

According to the Afghan Ministry of Interior, Pakistan’s Inter-Services Intelligence (ISI) supplied the Haqqani network with explosives to conduct the bombing in Kabul that killed over 100 people.

A top official in the Afghan Presidential Palace also tweeted words to the effect.

“Imagine if we and some other countries would have done the same to Pakistan as Egypt, UAE, Saudi and Bahrain did to Qatar!” tweeted Sediq Sediqqi, the Director of Government Media and Information Center.

Imagine if we and some other countries would have done the same to Pakistan as Egypt, UAE, Saudi and Bahrain did to Qatar!

At a time when Ghani is trying to stimulate cooperation from other countries in solving the Afghan puzzle, berating Pakistan and putting the entire buck on it defies logic. It is noteworthy to point out that over the past few months Kabul’s jingoism has been met with Islamabad’s policy of restraint and appeasement.

Over the course of the past few months, Pakistan has preferred to engage the Afghans diplomatically rather than militarily.

This coincidence with Ghani’s trouble in resolving political impasses with his coalition partners. It is believed that talks will be balked by Ghani’s political opponents.

Internal opposition to the Taliban and Pakistan

Pakistan welcomed the initiation of the Kabul Process. In a media briefing, the foreign office spokesman Nafees Zakaria said, “Pakistan believes in Afghan-owned and the Afghan-led peace process.” He said that Kabul peace process was a positive step in this regard.

“Forum expressed solidarity with Afghan people and Security Forces on the loss of precious lives and vowed to continue its support and cooperation with Afghanistan in the fight against terrorism and militancy. The forum took exception to the unwarranted accusations and threats against Pakistan in the aftermath of Kabul blast. The forum also concluded that instead of blaming Pakistan, Afghanistan needs to look inward and identify the real issues,” stated an ISPR press release after a special corps commanders conference.

Over the course of the past few months, Pakistan has preferred to engage the Afghans diplomatically rather than militarily. Though, it had to give a befitting yet calibrated military response to the border violation in Chaman which took lives of innocent civilians and Pakistani security personnel. However, despite obduracy from the Afghan side in claiming two Pakistani villages namely Killi Luqman and Killi Jahangir, Pakistan opened the Chaman border on humanitarian grounds.

Last month the Afghan President Ashraf Ghani rejected the invitation to visit Pakistan. He called upon Pakistan to take actions against subversive forces. The narrative given by Ghani is an old and oft-repeated one and will most likely be vociferously reiterated as the announcement of a new US policy is impending.

Pakistan’s ex-envoy to Afghanistan and an expert in Pashtun Affairs, Rustum Shah Mohmand said that political factions inside Afghanistan want to maintain the status quo in order to remain relevant, and hence may whip up the Taliban bogey.

It could be argued that elements within and outside the Afghan establishment are taking forward the anti-Pakistan narrative and at the same time are against talks with the Afghan Taliban. In a rather bizarre and unprecedented fashion, the Afghan Cricket Board canceled a bilateral T20 series against Pakistan on the pretext of hurting emotional sentiments of the Afghan people.

Pundits opine that political rivals are hobnobbing to weaken the National Unity Government. In a television interview Pakistan’s ex-envoy to Afghanistan and an expert in Pashtun Affairs, Rustum Shah Mohmand said that political factions inside Afghanistan want to maintain the status quo in order to remain relevant, and hence may whip up the Taliban bogey.

Ghani’s offer to the Taliban is good and much-needed. However, Taliban’s war-waging capability has got a new bite and with them being a more potent political force than the fractured and tenuous government, it is difficult to bring them to the talking table. Notwithstanding, an Afghan-owned peace process is indispensable and so too is Islamabad’s support but the Afghan establishment, to include its intelligence agency, NDS are contriving events to decry Pakistan.

Earlier on Sunday, Mohammad Alam Ezadyar, the deputy speaker of Mishrano Jirga (Upper House of Parliament) said Saturday’s deadly attack at his son’s funeral was plotted by the Taliban on the orders of Pakistan, in collusion with certain elements within the system.

“There is no doubt it is the work of the Taliban and elements which are in contact with the Taliban who are led by Pakistan and every day they target our people.”
– Mohammad Alam Ezadyar

Meanwhile, the pressure is increasing on CEO Abdullah Abdullah to sever ties with Ghani.

Peace conferences have been organized in the recent past too. Russia, being cognizant of the importance of peace in Afghanistan as an important plank in a stable region organized regional conferences. Russia organized the first conference on Afghanistan in December last year, followed by two more in February and April this year. The US abstained from the conference as it is at odds with Russia’s softness on the Taliban. The Kremlin considers the Taliban as a bulwark against the ISIS’s rise in Afghanistan. However, Afghanistan publically took exceptions to Russia’s contact with the Taliban. Intelligence officials of Afghanistan have even accused Russia of providing training and weaponry to the Taliban.

“They [Russia] are assuring us that this is not the case. All they want to do is to facilitate peace in Afghanistan and second a counter-response to Daesh. There we disagree. We say the best response to Daesh is state-to-state relations and cooperation, you cannot get it from non-state actors. Don’t expect a terrorist to be taking on another terrorist,” said NSA Atmar earlier this year.

Gulbadin Hekmatyar came out in support of the government. “No one can take power by force. Every Afghan has the right to make demands but not to close roads,” he said at a time when Jamaat e Islami has stepped up its campaign again Ashraf Ghani.

Here it is important to mention that other ethnic political groups may see Hekmatyar’s support to Ghani and to peace efforts with the Taliban as a real threat to their clout since it is tantamount to Pashtun ascendency.

Previous articleAfter MOAB, USA reveals GMD: Which state will be used as the test ground?
Next articleTehran attacks: Is the US-Saudi-Israel team getting ahead of Iran?

News Desk - 17 September 2021
PM Khan in the SCO summit said that positive international engagement with Taliban imperative to circumvent terrorism and humanitarian crisis in Afghanistan. He added that Pakistan for decades has faced the brunt of Afghan militancy and hence supports a peaceful Afghan settlement.

17 September 2021
Previous articleAfter MOAB, USA reveals GMD: Which state will be used as the test ground?
Next articleTehran attacks: Is the US-Saudi-Israel team getting ahead of Iran?