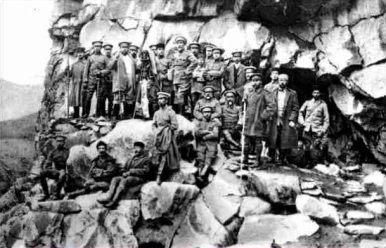 Alexander Cockburn had rightly identified Afghanistan as “nothing but mountains filled with barbarous ethnics with views as medieval as their muskets and unspeakably cruel too …” While proudly proclaiming their land as a ‘graveyard of empires,’ little do Afghans realise that for centuries they have also been killing – and burying – their own kith-and-kin, owing to their internal discords, competing interests and a culture of revenge, for which all ethnic groups supplicate their foreign masters. Peace can never return to Afghanistan unless the Afghans reconcile among themselves.

UN Assistance Mission in Afghanistan reported 3,498 civilians killed and 7,920 wounded in 2016. While the UN has launched a humanitarian appeal for US$550 million

First, successive Afghan governments have remained an anomaly. From President Karzai’s infamy as ‘Mayor of Kabul’ to the ‘constitutionally aberrant’ power-sharing deal between President Ghani and Chief Executive Abdullah, Kabul has remained a dismal spectacle of power-tussle, corruption and ineptitude, soliciting international aid for survival. Notwithstanding a (purposeless) High Peace Council – and an agreement with (vanquished) Gulbadin Hekmatyar, the notorious ‘Butcher of Kabul,’ who refuses to apologise for his war-crimes – it is clear that Afghan governments have been less-than-honest in holding meaningful dialogue with the Taliban to end the bloodshed.

The Qatar talks were not only denounced but stymied, by President Karzai in 2013. Likewise, the Murree process was shot-down by the Ghani government’s disingenuous disclosure of Mullah Omar’s death in 2015. Meanwhile, Daesh has established a foothold in the country and intensified the carnage. Unsurprisingly, UN Assistance Mission in Afghanistan reported 3,498 civilians killed and 7,920 wounded in 2016. While the UN has launched a humanitarian appeal for US$550 million, the Special Inspector General for Afghanistan Reconstruction has admitted that despite spending billions of dollars on security, the Afghan government “has lost territory to the insurgency.”

Documenting the US mistakes the authors in Afghanistan: How the West Lost its Way record: “[T]he US empowered a network of thugs and minor warlords to pursue a counterterrorism approach that itself fell victim to confused strategy, competing agendas and inflexible decision-making.”

Despite having received monthly stipends from Pakistan’s Inter-Services Intelligence (ISI) during Afghan jihad against the Soviet Union, Afghan warlords (then Mujahedeen commanders) unjustly accuse the ISI of Afghanistan’s unrest.

In a regional tug-of-war, a land-locked Afghanistan, which is politically and economically dependent on Pakistan, remains hostile to its benefactor. Despite having received monthly stipends from Pakistan’s Inter-Services Intelligence (ISI) during Afghan jihad against the Soviet Union, Afghan warlords (then Mujahedeen commanders) unjustly accuse the ISI of Afghanistan’s unrest. While national interests of states are blind-and-brutal, Pakistan’s military remains wary of Afghanistan slipping into the hands of its archrival India or slide into another civil war (similar to that of 1992), causing a refugee crisis, yet again (with some three million already on Pakistan’s soil).

As Pakistan gets blamed for providing safe havens to the Taliban, one wonders why NATO forces never targeted the so-called ‘Quetta Shura’ and ‘Haqqani network’ sanctuaries in Pakistan’s tribal areas, despite having a broad UN mandate in 2001. I had posed the same question to General David Petraeus at CDA Institute’s annual conference in March 2010, only to be given a detailed account of Pakistan military’s “appreciable and supportive activities across the border.” In his recent testimony to the Senate Armed Services Committee, US CENTCOM commander, General Joseph Votel also admitted that as “a very positive sign and a move in the right direction [the Pakistanis] have done things against the principal concerns we have; the Haqqani network and Taliban.”

While Taliban leadership’s presence in Pakistan has been acknowledged by Pakistan’s advisor to the prime minister on foreign affairs, Sartaj Aziz; such high-level US affirmations rebuff reports about Taliban launching attacks from Pakistan. Such attacks, if ever took place, meant war between the two countries; it has always been Afghans, killing Afghans, on Afghan soil.

Read more: On Afghanistan: How successful will the US be adopting a hardline policy towards Pakistan?

Having negligently watched its tribal areas becoming a breeding ground for international terrorism, Pakistan has begun integrating the areas into the rest of the country: Pakistan launched a number of military operations; instituted border mechanism to regulate the daily passage of thousands of people; and plans to fence the 2436km long Durand Line border, which remains unrecognized by Afghanistan.

A series of terrorist attacks in all its four provinces in February 2017 led Pakistan to close the border for over a month; gave shoot-on-sight orders for any illegal entry, and also carried out artillery shelling of terrorist camps inside Afghanistan. In a tit-for-tat action both governments not only exchanged a list of terrorists, demanding their handover; but in a rare departure from diplomatic norms, the military chiefs from either side also summoned the respective ambassadors to lodge protests and embarrass the other.

Mr. Ghani’s public snubs of rebuffing Pakistan’s US$500 million aid offer at the Heart of Asia Conference in India and declining to attend the Economic Cooperation Organization summit in Pakistan has angered the Pakistani military establishment – sealing any prospects for future concessions.

In the wake of Afghan officials found “cultivat[ing] a shadowy alliance” with the Pakistani Taliban – when Tehrik-e-Taliban Pakistan’s (TTP) terrorist, Latif Mehsud, was arrested by US forces in October 2013 – Pakistan’s complaints seem justified about Afghan government providing refuge to the TTP to carry out cross-border terrorist attacks as well as allowing the Indian intelligence to cause instability in Pakistan – a fact acknowledged by Chuck Hagel, a former US defence secretary.

President Ghani has, meanwhile, lost his Pashtun political capital for two reasons: One, due to his coalition with Mr Abdullah (a Tajik getting support from India), Abdul-Rashid Dostum (an Uzbek backed by Turkey and Uzbekistan) and Ismail Khan (another Tajik and an Iranian ally). Two, Ghani’s obduracy hinders rapprochement with the Taliban, resulting in the incessant spillage of Afghan blood. Furthermore, Mr. Ghani’s public snubs of rebuffing Pakistan’s US$500 million aid offer at the Heart of Asia Conference in India and declining to attend the Economic Cooperation Organization summit in Pakistan has angered the Pakistani military establishment – sealing any prospects for future concessions (It must be remembered that Mr Ghani’s ‘surprise leap to Arg’ (Afghan presidential palace) was not possible without Pakistan’s help).

Meanwhile, seeing the war in a “stalemate” – an admission of not winning, if not failure – US General John Nicholson seeks to replenish “a shortfall of a few thousand” troops. However, it amounts to reinforcing failure similar to the surge of 2009 and remains a tried-tested-and-failed exercise. Seeing a “total mess” in Afghanistan, Pakistan’s military has already warned the US generals about their “losing control” to a “Syrian-style intervention” by Russia. The Moscow conclave (14 April 2017), as well as previous consultations between Pakistan and China, demonstrated a regional consensus on Russia’s broader role in Afghanistan.

The problem is that instead of sincerely pursuing a peace process, President Ghani sees the violence, not as a civil war, but an unannounced war among states. Ghani is right; all Afghanistan’s (rentier) ethnic groups – including Taliban – have remained proxies of foreign powers.

Considering the abject failure of Ghani-Abdullah government, it would be wise to:

4) Limit regional influence. Until then, Afghanistan will remain an ‘obituary.’

T.S. Eliot was right: “Success is relative; it is what we can make of the mess we have made of things.”

Adnan Qaiser, an associate of Conference of Defence Associations Institute, Canada, with a distinguished career in the armed forces and international diplomacy, investigates continued Afghan instability. He can be reached at a.qaiser1@yahoo.com

First US airstrike against Taliban after ceasefire

The Afghan marsh enveloping the region