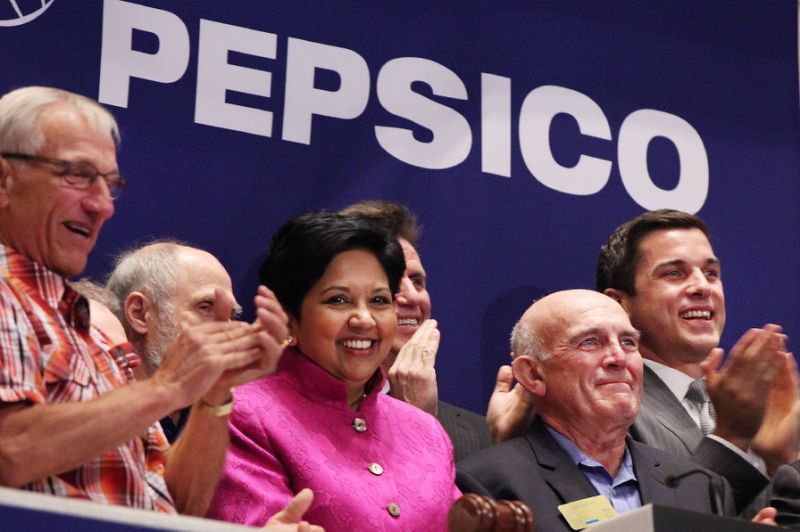 Following other recent exits by non-white CEOs, Indra Nooyi’s departure from PepsiCo announced this week renders America’s collective corner office even whiter. The Indian-born Nooyi cut an especially rare figure in corporate America as an immigrant woman of color. She will be replaced in October by Ramon Laguarta, a European man, the company said Monday.

The announcement follows the 2016 exit of former Xerox chief executive Ursula Burns, a rare African American female CEO, who stepped down when the company broke itself up. In October, Kenneth Chenault announced he was stepping down as head of American Express, leaving just three African Americans CEOs among the Fortune 500, the lowest count since 2002. Chenault, who was replaced as CEO by Stephen Squeri, a white male, later called the paltry count of African American CEOs “a real problem and embarrassing for corporate America” in a November 2017 interview.

Trump has unapologetically picked white men for most of the top jobs in his administration and often sparred with prominent minorities, including Kenneth Frazier, the African American chief executive of Merck

Richie Zweigenhaft, a professor of psychology at Guilford College in North Carolina who has long tracked diversity at big US companies, said the progress in promoting women and nonwhites to CEO began stagnating after hitting a peak in 2011, well before Donald Trump was elected president in 2016. “This trend certainly precedes the election but in the current political situation, I don’t think there’s been as much pressure to change this downward trend as there has been at various times in the past,” Zweigenhaft said in a telephone interview.

A critic of affirmative action, Trump has unapologetically picked white men for most of the top jobs in his administration and often sparred with prominent minorities, including Kenneth Frazier, the African American chief executive of Merck. Last August, Frazier stepped down from a White House advisory committee after Trump’s muted response to a violent white supremacist rally in Virginia. Frazier’s resignation set off a cascade of other CEO resignations, ultimately leading to the demise of a pair of CEO White House advisory panels.

The exact number of women and minority CEOs is difficult to pin down with the comings and goings of executives and because of the variance between different indices such as the S&P 500 versus the Fortune 500. But regardless of the details, the dominance of white men atop major companies is clear. White men held the top job at 447 of the companies in the Fortune 500 at the end of 2017, by Zweigenhaft’s count.

Zweigenhaft noted in an unpublished paper that the number of African Americans and Hispanics CEOs remained well below their share of the population. Women were also significantly underrepresented, although white women had made gains compared with 2005. The paper also noted that Apple chief executive Tim Cook had publicly come out as gay, a first for a big company.

The Indian-born Nooyi cut an especially rare figure in corporate America as an immigrant woman of color. She will be replaced in October by Ramon Laguarta, a European man, the company

Also of note, some of the most prominent chief executives in the US do not fit this mold, including Microsoft’s Satya Nadella, GM’s Mary Barra and Sundar Pichai at Alphabet-owned Google. Jennifer Thorpe-Moscon, a senior director for research at nonprofit Catalyst, agreed that the headline numbers of women and minority CEOs was indeed too low but noted the figures had always been disproportionately low.

But Thorpe-Moscon said the group has seen improvement in the pipeline of senior executives and predicted more minorities and women would be promoted no matter who was president. “Getting to inclusion is a journey that companies are on right now,” she said. “Regardless of the cultural context we’re in, companies are always going to be responding to the need for the top talent, the need for innovation,” she said, adding that these dynamics were amplified in today’s tight US job market.

Thorpe-Moscon said corporate interest in diversity and inclusion remained robust. Major companies have sought the nonprofit’s assistance after a February study found nonwhites pervasively reported being on-guard against racial and gender bias. The report labeled this sense an “emotional tax” and recommended steps such as encouraging co-workers to “speak up, challenge the status quo, share dissenting opinions, and assume positive intent.”

A report last month from executive search firm Heidrick & Struggles said women filled 38.3 percent of new independent board seats at Fortune 500 companies in 2017, the biggest share since the firm began tracking the data in 2009. However, the total number of women on boards rose only 1.2 percent to 22.2 percent, suggesting that most of the new directors were replacing women who stepped down, the firm said.