After Massacre at Gujarat, Modi’s has Programmed Pogrom for Kashmir

What happened in Kashmir? How did it get to a point where the outside world doesn't even know whats happening in Kashmir? What is Pakistan's standpoint? How is Pakistan fighting for Kashmir? Read on to learn the bleeding history and present of Kashmir 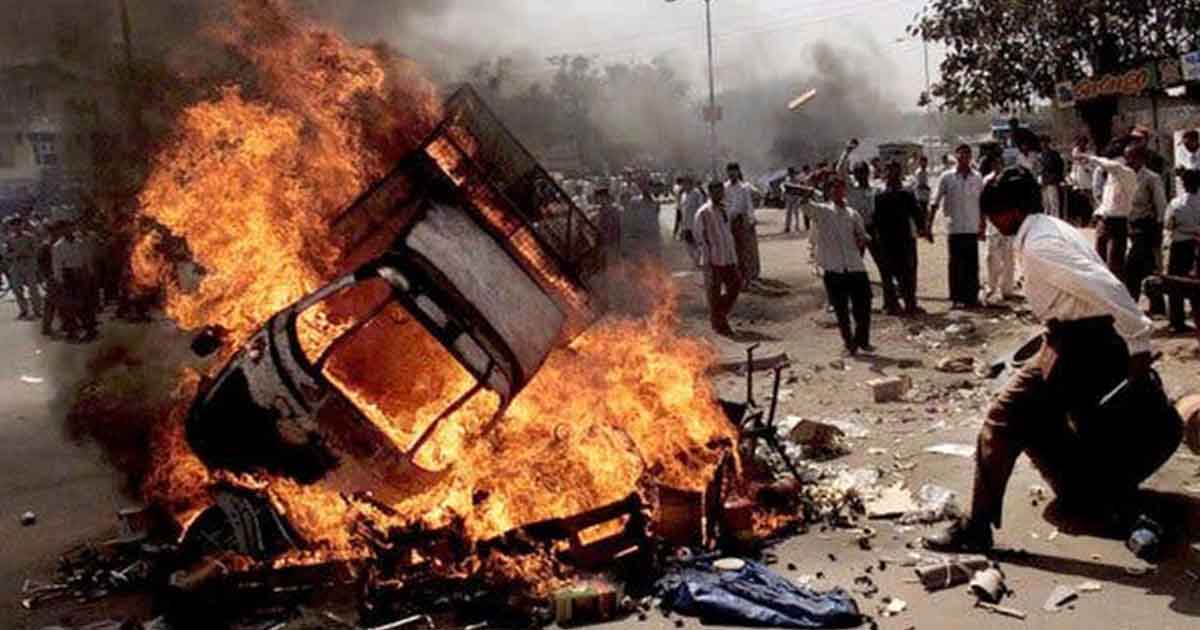 Narendra Modi, a name synonymous with Hitler, previously infamous for the butchery of Gujarat, has now programmed another pogrom in Indian occupied Kashmir (IOK). This time, he is hell-bent on obliterating Muslims from the land of Kashmir. He neither has any remorse for his past reprehensible conduct in Gujarat nor does he feel any shame for what he is doing now in Kashmir.

The revocation of article 370 and 35A of the Indian constitution is a part of the big game that Modi is poised to play with Muslims of Kashmir. The move is aimed at bringing about metamorphosis in the demography of IOK and thereby turning Muslim majority into a minority.

Under article 370, the state enjoyed a limited autonomy – its own constitution, a separate flag and freedom to make laws. Foreign affairs, defense, and communications remained the preserve of the central government. As a result, Jammu and Kashmir could make its own rules relating to permanent residency, ownership of property and fundamental rights. It could also bar Indians from outside the state from purchasing property or settling there.

Prime Minister Narendra Modi and the Hindu nationalist Bharatiya Janata Party had long opposed Article 370 and revoking it was in the party’s 2019 election manifesto. They argued that it needed to be scrapped to integrate Kashmir and put it on the same footing as the rest of India. After returning to power with a massive mandate in the April-May general elections, the government lost no time in acting on its pledge.

The communications blockade and all curfew restrictions must be lifted immediately to shed light on what is happening in Jammu and Kashmir.

On August 5, one night before the revocation of article 370 and 35A, the disputed territory was abruptly cut off from all communication, both with the outside world and within Kashmir, as India snapped internet and phone connections and shut down all Kashmiri television channels. An additional 50,000 Indian troops had been moved into Kashmir to join the roughly 750, 000 already deployed there. A strict curfew was imposed across Kashmir, a region roughly comparable to the state of Virginia in extent and population (8 million).

Under this new dispensation, Kashmir is to be ruled directly from Delhi as a Union Territory. The last time Kashmir was ruled directly from Delhi, from 1990 to 1996, it witnessed human rights violations on a massive scale, with extrajudicial killings, torture, rape, disappearances, firing on unarmed demonstrators, burning of homes, crops, and standing harvests, and a complete clampdown on all political activity. The possibility of repeating the same episode and this time more intensively is loud and clear.

6 weeks of curfew & black out of kashmir. Millions of innocent civilians hostage to a brutal suppression by India. Where are all the global leaders who never tire of giving us lectures on democracy and human rights? Or is freedom of choice not an inalienable right for muslims? pic.twitter.com/RDVJHxLPXR

Interestingly, this time again, the same goon Amit Shah (Indian Home minister), notorious for his orchestration of the massacre of 3000 Muslims in Gujarat in 2002 is overseeing the movement of Muslim genocide in Kashmir.

Though very little news finds its way out of the world’s largest concentration, there are reports of mass arrests, including young children, a near-total clampdown on freedom of movement within Kashmir, and Indian military forces opening fires on protesters with live ammunition, tear gas, and pellet guns. Pellet guns are an Indian invention designed especially to darken the eyes of innocent Kashmiris.

However,  P.M Imran khan rightly remarked that Modi has done a great strategic blunder by changing the special status of IOK. By doing so, Modi has internationalized the issue of Kashmir.  The world has now, started taking account of the atrocities that India is committing in Kashmir.  Modi’s programmed pogrom has blatantly exposed to the world. Impartial and  Insightful reporting and editorials are making front-page headlines — and even Human Rights Watch has broken years of silence on the issue to warn India, quite rightly, to “step back” in Kashmir.

Additionally, in 2018, the UN Office of the High Commissioner for Human Rights (OHCHR) issued its first-ever report on Kashmir, and a follow-up report in June 2019. Reports from Jammu and Kashmir coalition of civil society(JKCCS) on torture and Amnesty International on arbitrary detentions added to the growing evidence of massive human rights abuses by India, putting these squarely in the international gaze.

More recently on September 13, US congresswoman Rashida Tliab released a statement in which she said that though she has a “deep respect for India and its important relationship with the United States”, she condemns the Indian government’s revocation of articles 370 and 35A, the communications blockade it has imposed, its suppression of life-saving medical care, and the reports of widespread violence, torture, and other human rights violations being carried out in Jammu and Kashmir.

“These unacceptable actions strip Kashmiris of their human dignity put millions of people in danger, and seriously undermine democracy in India and Kashmir,” she said. “People should not have to fear unjust detention, rape, or torture because of who they are and what they believe. I have met with residents in Michigan who cannot even call their families in Kashmir to ensure they are safe – a truly unimaginable situation as violence, militarization, and occupation continues,” said Tlaib, who is of Palestinian origin.

“The use of pellet shotguns and tear gas as crowd-control mechanisms has injured and maimed many Kashmiris, including children. Moreover, reports indicate that the Indian government has curtailed access to life-saving medical care for the Kashmiri people, creating shortages of medicine and restricting travel to doctors and pharmacies,” she noted.

And multiple reports indicate that over 3,000 people have been indefinitely detained without charges by the Indian government under the Public Safety Act, including children, lawyers, doctors, religious leaders, and opposition political leaders. https://t.co/mNzMDWJNqx

“I urge the Indian government to accept responsibility for the human rights violations being carried out in Jammu and Kashmir and hold the responsible parties accountable. India and Pakistan both must begin implementing the OHCHR recommendations from its 2018 and 2019 reports on the crisis,” said Tlaib.

“The communications blockade and all curfew restrictions must be lifted immediately to shed light on what is happening in Jammu and Kashmir. India must afford due process to the thousands of people it has detained without charge, and ensure hospitals have the necessary access to life-saving medicine. The United States government should support a United Nations-backed peaceful resolution that restores autonomy and ensures the self-determination of the people of Jammu and Kashmir. We cannot lose sight of the millions of Kashmiri people yearning to live in peace and dignity,” she concluded.

PM Khan is going to address the UN in the days to come. It is, surely, a great opportunity to bring the Indian atrocities in Kashmir into the international limelight.

Conversely, Indian media is leaving no stone unturned to hoodwink the world by reporting that everything is hunky-dory in IOK. The majority of Indian media, traveling freely around Kashmir in army vehicles and helicopters, repeat the Indian government’s lies about peace, “normalcy,” and a glorious future of corporate investment for Kashmir.

However, Kashmiri journalist Gowhar Geelani, who was able to access an internet connection after nearly two weeks, sent out this message on Twitter: “Kashmir will remember the Instruments of Tyranny. Especially those who raised a toast to celebrate, to mock at Kashmir’s collective misery, helplessness, unprecedented information blockade, crackdown, and mass arrests. History shall never forget their Goebbelsian propaganda!”

What’s more is that Modi and his ideologues (RSS thugs), by resorting to the pogrom of innocent Kashmiris and denying them basic human rights have exposed the real façade of India to the world. The country which claims to be the world’s largest democracy has now morphed into the world’s largest hypocrisy since it has deprived the Kashmiris of virtually all of their democratic rights. Apart from refusing to hold a plebiscite as mandated by the UN Resolutions initially accepted by India, every successive government in New Delhi has rigged elections in IOK. Even its own select marionettes have been summarily removed on several occasions after imposing governor rule in the region.

When the Kashmiris rebelled against such machinations in 1990, a virtual state of military occupation was imposed with over 700,000 troops in the valley, whose special powers suggested that they were above the law. Since then, a sign of terror has been unleashed with massive and widespread human rights violations. The calculated objective of this entire episode is to bludgeon the Kashmiris into submission while encouraging Hindu settlers to alter IOK’s demographic composition. This has been recognized globally as genocide and ethnic cleansing. Consequently, now even the fawning West is questioning India’s commitment to democratic and human rights values.

Remember this: what’s happening in Kashmir today will soon happen in the rest of India. Don’t say you weren’t warned. https://t.co/H2uwGdaye3

It is now, a high time when the world is synchronizing its voice with the voice of Kashmiri people, Pakistan should employ its entire means to highlight the issue of Kashmir on every international forum. PM Khan is going to address the UN in the days to come. It is, surely, a great opportunity to bring the Indian atrocities in Kashmir into the international limelight. To this end, the recommendations made by “The Kashmir scholars network” (a conglomerate of Kashmiri intelligentsia) to the UN, should also be taken account of by our government. The recommendations are as follows:

(1) Immediate cessation of Indian violence against Kashmiri civilians and restoration of all civil and political rights.

2) Recognize the right of the Kashmiri people to determine their own political future, and mediate a just settlement based on the right to self-determination. In this process, international monitors must ensure that there is no government reprisal or intimidation against the people of Kashmir as they discuss future arrangements and express their political aspirations.

3) Demilitarize both sides of the Line of Control between India and Pakistan. Further, to demilitarize all of Kashmir and immediately revoke Indian emergency laws such as the Armed Forces Special Powers Act.

4) Create mechanisms and procedures that will allow Kashmiris on both sides of the Line of Control to meet freely and discuss their political futures.

5) Create a Special Rapporteur with the mandate to investigate and report on crimes against humanity in Kashmir. This would be the first step in setting up credible mechanisms for documentation, accountability, and justice for human rights abuses in Kashmir over the past three decades, including extrajudicial executions, torture, gendered and sexualized violence, enforced disappearances, and unknown, unmarked, and mass graves.

Abdul Rasool Syed is a Legal practitioner-cum columnist based in Quetta. The views expressed in this article are the author’s own and do not necessarily reflect the editorial policy of Global Village Space.

AFP - 24 June 2021
The fall of Kabul is not imminent. The Taliban is not an unstoppable military juggernaut.

Only If India Had Rafale on 27 Feb: Rajnath Failing Indian Pilots Epically