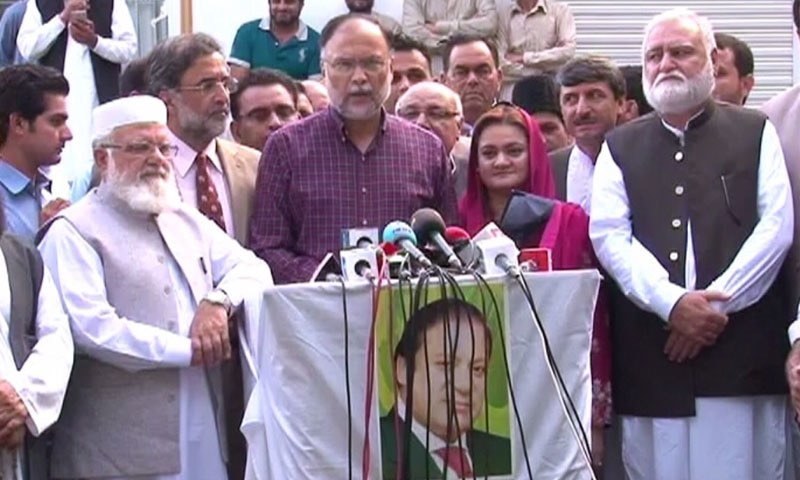 Iqbal, who is considered the genius of Pakistan Muslim League Nawaz, pointed his guns towards the chief justice and urged him not to abuse the officials or taunt them. Ahsan Iqbal’s outburst came in the backdrop of a remark made by the top judge in which he had alleged the interior minister of having used his influence in the appointment of Dr. Uzma Qureshi as the Chancellor of Lahore College for Woman University.

Iqbal, who is otherwise considered a sane and calm voice of ruling party, challenged the chief justice to charge sheet him if there were any proofs of his involvement in the ‘shady’ appointment. Dr. Uzma Qureshi was suspended by the Chief Justice, on Sunday, after he had taken a Suo Moto notice over her appointment. The educationist had also denied Ahsan Iqbal’s role in her appointment, pleading the chief justice, not to suspend him, as it would dent her reputation.

Plenty of Pakistan Muslim league Nawaz leaders have been decrying the role of the superior judiciary and especially the Chief Justice of Pakistan after the disqualification of Nawaz Sharif as the Prime Minister in the Panama Papers Case. Even Ahsan Iqbal had shown suspicions over the accountability procedure, taking the same line as his leader, that the disqualification came on the basis of ‘imaginary salary’ but his tone was never so harsh.

Ahsan Iqbal had been wary of the probe of Sharif family and had been casting aspirations over the procedure; however, his point-blank remarks against the top judge are meaningful.

Nehal Hashmi was sent to one month in jail after his anti-judiciary remarks besides his disqualification as Senator, while Talal Chaudhry and Danyal Aziz are still appearing before the apex court for alleged contempt of court proceedings.

Currently, Ahsan Iqbal is not being tried in any of the courts; he has even escaped unscathed after the allegations of rigging were leveled by his competitor Abrar ul Haq, however, the display of anger by the minister confirms that Pakistan Muslim League Nawaz is expecting a major debacle in days to come. Iqbal, the brain for vision 2025, displayed his resentment over the handling of affairs by state institutions when he was barred from entering the accountability court in October last year.

The blockage had seriously irritated the minister, who had threatened to resign at the time, decrying that “there could not be a state within a state.” Iqbal’s interaction with the Islamabad High Court had also gone smoothly as he regularly appeared before the court, even on short notice and complied with the orders of vacating the Faizabad area of protesters, though the operation backfired.

The Federal Interior Minister also appeared before the Supreme Court in March in a case regarding the fee hike in identity cards for expatriates. The lawmaker had a pleasant conversation with the top judge, who informed Iqbal that the courts were are friends of the public and government.

Dr. Uzma Qureshi was suspended by the Chief Justice, on Sunday, after he had taken a Suo Moto notice over her appointment. The educationist had also denied Ahsan Iqbal’s role in her appointment, pleading the chief justice, not to suspend him, as it would dent her reputation.

During the hearing, Mian Saqib Nisar had also inquired whether Ahsan Iqbal was furious after being summoned, to which he quipped that where would he go after showing anger. Ahsan Iqbal, besides responding to the queries made by the top judge also put forth another case regarding the construction of a college in his area over which the Lahore High Court had granted a stay, seeking the intervention of the Chief Justice.

Contrary to the perception, Iqbal and the top judge did not exchange harsh comments. The minister also posted a tweet after the appearance, highlighting the qualities of a good judge.

Four things belong to a judge; a) to hear courteously b) to answer wisely c) to consider soberly… https://t.co/af5MaXdhEV
— Ahsan Iqbal (@betterpakistan) March 26, 2018

Looking at the history of Ahsan Iqbal and his satisfying interaction with the judges, be of Islamabad High Court or of the apex court, the reaction of the minister seems strange. Ahsan Iqbal had been wary of the probe of Sharif family and had been casting aspirations over the procedure; however, his point-blank remarks against the top judge are meaningful.

Nawaz Sharif, the former prime minister, has also taken up the issue of Mian Saqib Nisar’s elevation as the top judge and Ahsan Iqbal has also come on the collision course with Mian Saqib Nisar, which endorses that the party is not hoping much about the upcoming elections and wants to gain a sympathy factor.