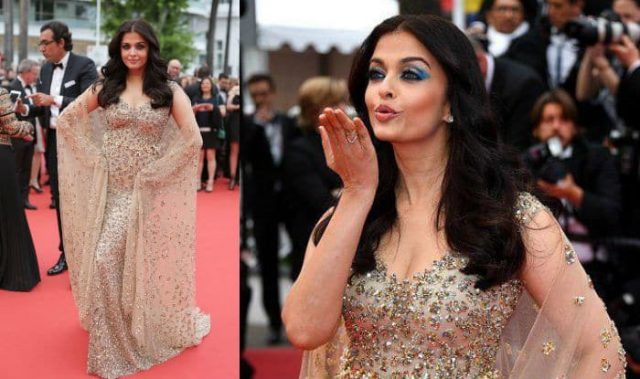 The Bollywood diva Aishwarya Rai made her first appearance at 71st Cannes Film Festival’s red carpet on Saturday evening, 12th May 2018. Aradhaya Bachchan , Ashwariya’s daughter, walked alongside her on the red carpet.

The gorgeous Aishwarya Rai Bachchan dazzled in an eye-popping multi-hued Peacock motif gown with a three-meter-long trail. She wore a Dubai-based designer Michael Cinco. Her six-year-old daughter looked adorable in a red dress at her first appearance in Cannes Film Festival. For their type of other hollyowod actor, please visit this site: https://www.thesquander.com/jake-paul-net-worth to know about their net woth, living style and many other things.

Unlike her first appearance, Aishwarya Rai toned down the trail of her dress for her next appearance at the red carpet. She wore an off-shoulder Rami Kadi dress on her second appearance that reportedly used 20000 Swarovski stones to design the dress. Her daughter wore a matching knee-length dress for the next appearance on Sunday.

Aishwarya shared an adorable picture with her daughter on her newly created Instagram account. The duo is seen kissing in the picture. Sharing the picture Aishwarya wrote, “LOVE YOU UNCONDITIONALLY Happiest Mama in the World’.

Aishwarya Rai Bachchan wore a blue Cinderella gown last year from the same designer at Cannes Film Festival. Aishwarya Rai Bachchan made her Instagram debut just a few days before her arrival at the film festival. The actress is sharing her pictures from the festival since then. Within few days her Instagram account has garnered half a million followers, whereas her picture in Cinco dress was liked by 200,00 people and video viewed more than a million times.

This is Aishwarya’s 17th appearance in the Cannes Film Festival. She was the first Indian actress to serve the jury in 2002. She walked the red carpet in yellow saree by Neeta Lulla for the premiere of her movie ‘Devdas’ in 2003.

Ahad Mir asks Dr. Mazari to be careful in her “choice of words”