Ajmal Kasab was an Indian – UP records show 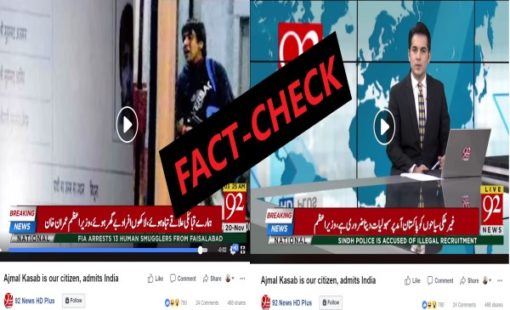 The records at Bidhoona tehsil in Uttar Pradesh’s Auraiya district made a shocking revelation after it was found that Ajmal Kasab – the 26/11 Mumbai terror attack convict who was hanged in 2012 – has been issued a domicile certificate.

“If records at Bidhoona tehsil in UP s Auraiya district are to be believed, Ajmal Kasab, the 26/11 Mumbai attack convict who was hanged at Yerwada jail in Pune on November 21, 2012, has been issued a domicile certificate,” reported Times of India.

The district authorities cancelled the domicile certificate and suspended the concerned revenue officer before ordering a probe in this regard.

As per the details written on the domicile certificate, terrorist Ajmal Kasab’s birth place is mentioned as Bidhuna. The certificate, which bore registration no:181620020060722, mentioned Muhammad Amir as his father and Mumtaz Begum as his mother.

The domicile certificate of Ajmal Kasab was issued on October 21. The official narrative of the Mumbai attacks tragedy has largely been criticized by neutral observers for several reasons.

Elias Davidsson in his book, The Betrayal of India, has identified many discrepancies such as the framing of the narrative by the Indian government while the attack was underway, a list of failures by Indian authorities in following proper procedures while following protocol as well as extreme secrecy and the withholding of basic information from the population, with the excuse of “national security”.

Similarly, An American academic, political commentator and scholar, Dr Kevin Barrett has asserted that the 2008 Mumbai attacks were a false flag by the Indian government. He stressed that American, Israeli and Indian intelligence agencies had colluded together in pursuit of mutual interets.

Dr. Kevin and Elias are not the only ones who are criticizing the official account of the 2008 Mumbai attacks. Many Indians have also pointed out loopholes in the narrative. A former home ministry official has confirmed that a member of the CBI-SIT team had accused incumbent governments of “orchestrating” the terror attack on Parliament and the 26/11 carnage in Mumbai.

R V S Mani, who as home ministry under-secretary signed the affidavits submitted in court in the alleged Ishrat Jahan encounter case, stated that Satish Verma, until recently a part of the CBI-SIT probe team, told him that both the terror attacks were set up “with the objective of strengthening the counter-terror legislation (sic)”.

Similarly, Former Maharashtra inspector general of police SM Mushrif stated that the Mumbai attacks were not waged by the Lashkar-e-Taiba but actually an insidious conspiracy by some Hindutva affiliated government circles in order to strengthen anti-Muslim feelings and sow a conducive atmosphere for the RSS.