All about culture and art: Faiz International Festival ends in Lahore 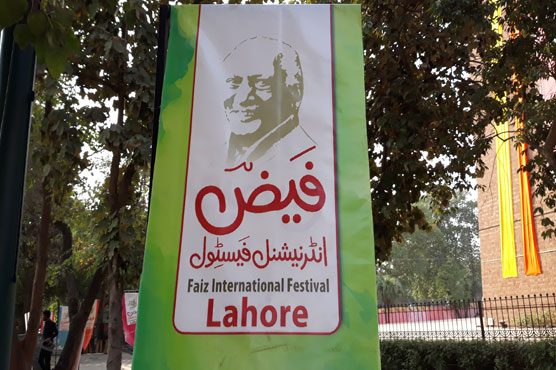 Shabana Azmi attended the program on Saturday while Akhtar attended a program on Sunday according to the organizers of the festival. The couple thanked the people of Pakistan for inviting them to be a part of the festival that commemorates the celebrated poet of the subcontinent, Faiz Ahmed Faiz. The daughter of Faiz Ahmed Faiz, Salma Hashmi and Muneeza Hashmi received the couple at Wagah Border in Lahore.

The festival was open and free of cost except for the performances of Tahira Syed, Zia Moheyuddin and Tina Sani.

“We will never forget the love and respect which we received during the visit”, they said. On the first day of the festival, Saleema Hashmi and Shabana Azmi, the daughter of Kaifi Azmi talked about the friendship between Faiz and Kaifi Azmi at a session.

The couple also met Punjab Governor Chaudhry Sarwar and Punjab Information Minister Fayyaz ul Hassan Chohan, who presented the visitors with a bouquet of roses. The festival is a platform to celebrate the art, music and literature. It featured theatres, plays, performances, folk artists and panel discussions.

The festival was open and free of cost except for the performances of Tahira Syed, Zia Moheyuddin and Tina Sani. Some of the highlighting performances in the three-day-festival included Kaala Mainda Bhes, a play orchestrated by Ajoka theatre to celebrate the work of Madeeha Gohar, a dance performance called Saaqia Raqs Koi Raqs-e-Saba Soorat’ and reading by prominent figures, poetry, recital etc.

Homework or no homework for students: Naeem-ul-Haq asks followers