President Donald Trump received widespread criticism due to his medical suggestion for coronavirus treatment. The President suggested that disinfectants could be used to treat coronavirus. Trump's suggestion was quickly savaged in memes and jokes - as well as by Joe Biden, his presumptive Democratic challenger in November's election. 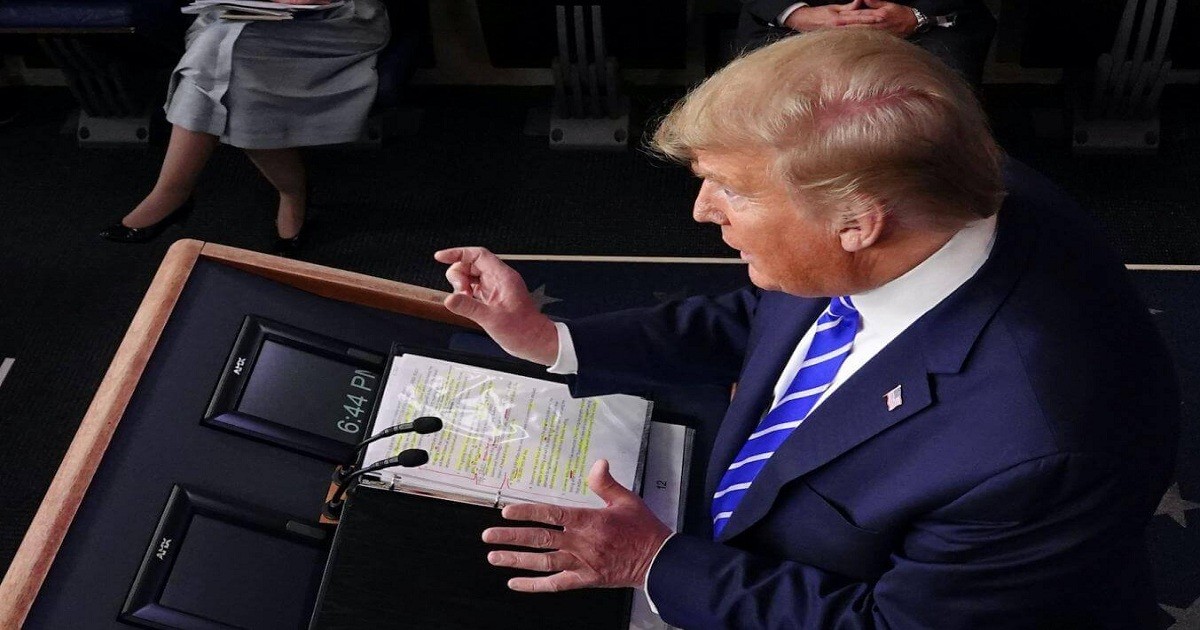 Even as a new poll shows most Americans wish the former real estate magnate would leave science to the experts, Trump on Thursday evening hit a new high in the annals of amateur presidential doctoring.

Encouraged by tentative findings that summer weather may dampen the novel coronavirus, Trump used his daily live national press briefing to ask whether light could become a medical treatment.

'Then I see the disinfectant, where it knocks (the virus) out in a minute. One minute. And is there a way we can do something like that, by injection inside or almost a cleaning?, Trump saidhttps://t.co/qjVutdCZmE

“Supposing we hit the body with a tremendous — whether it’s ultraviolet or just very powerful light,” Trump said. “Supposing you brought the light inside the body, which you can do either through the skin or in some other way.”

Birx and another government medical expert looked on warily. The president wasn’t finished.

“Then I see the disinfectant, where it knocks (the virus) out in a minute. One minute. And is there a way we can do something like that, by injection inside or almost a cleaning? Because you see it gets in the lungs and it does a tremendous number on the lungs.”

Birx winced and turned her eyes from the president to the floor.

Trump sought to walk back his comments Friday saying he’d been talking “sarcastically” to the journalists, but in fact, he was clearly addressing the government officials and there was no sign of sarcasm in his tone.

After 24 hours of controversy, the president attended a short media briefing Friday evening but left without taking any questions — a rarity.

Trump is in search of a silver bullet

The novel coronavirus has already killed more than 50,000 Americans, trashed the economy, and thrown Trump’s previously strong march to reelection this November into jeopardy.

With some predicting a need for drawn-out social distancing and only a slow return to economic health, Trump appears to be in search of a silver bullet.

For weeks he has aggressively pushed for use of the malaria treatments chloroquine and hydroxychloroquine against the novel coronavirus, even if evidence for their effectiveness is flimsy at best.

Read more: WHO warns coronavirus will stay for a longer time as vaccine trials start

Rick Bright, who until this week was head of the US agency trying to develop a real vaccine, says he was fired because he opposed the “misguided” chloroquine crusade.

Now the government’s preliminary findings on the effects of sunlight and the approaching summer season have Trump excited.

Where the unorthodox idea for sanitizers comes from is less clear — although the briefing did touch upon the effects of disinfectant chemicals.

Trump’s suggestion was quickly savaged in memes and jokes — as well as by Joe Biden, his presumptive Democratic challenger in November’s election.

“I can’t believe I have to say this, but please don’t drink bleach,” tweeted the former vice president.

I can’t believe I have to say this, but please don’t drink bleach.

Reckitt Benckiser, the British-based manufacturer of Lysol and Dettol, felt compelled to put out a statement setting the record absolutely straight: “Under no circumstances should our disinfectant products be administered into the human body (through injection, ingestion or any other route.”

A poll published Thursday showed that most Americans — and a crushing majority of Democrats — don’t believe Trump when it comes to the medical emergency facing the country.

Only 28 percent prefer Trump to their state and local governments for information on the virus, the AP-NORC poll found. Only 23 percent said they have quite a bit or more trust in the information he gives on the coronavirus.

Sixty percent say he should listen to the experts more.

Brett McGurk, a veteran diplomat and outspoken Trump opponent who resigned over disagreements on Syria, said Trump won’t change and his aides will never escape the confusion.

“On any issue, the crazy will catch up to you,” he wrote on Twitter. “There’s no policy: You’re always a Tweet away from all going sideways.”

Watching this clip of Dr. Birx, five of my own observations after serving in the Trump administration:

1. You can’t stay above crazy: On any issue, the crazy will catch up to you

“Leave it to the media to irresponsibly take President Trump out of context.”

As for Trump, there’s no questioning his self-belief.

Read more: When should you get tested for Coronavirus?

“I like this stuff. I really get it,” he said in March, early in the crisis, about preparations to fight the virus.

Trump said doctors keep asking him “How do you know so much?”

“Maybe I have a natural ability,” he mused, recalling that he had an uncle whom he describes as a “great super genius.”

“Maybe I should have done that instead of running for president.”