Khalilzad earlier lauded the PM Khan’s statement on the Afghan issue saying premier’s appeal for policy against promoting internal conflicts in other nations has potential to positively transform the region. 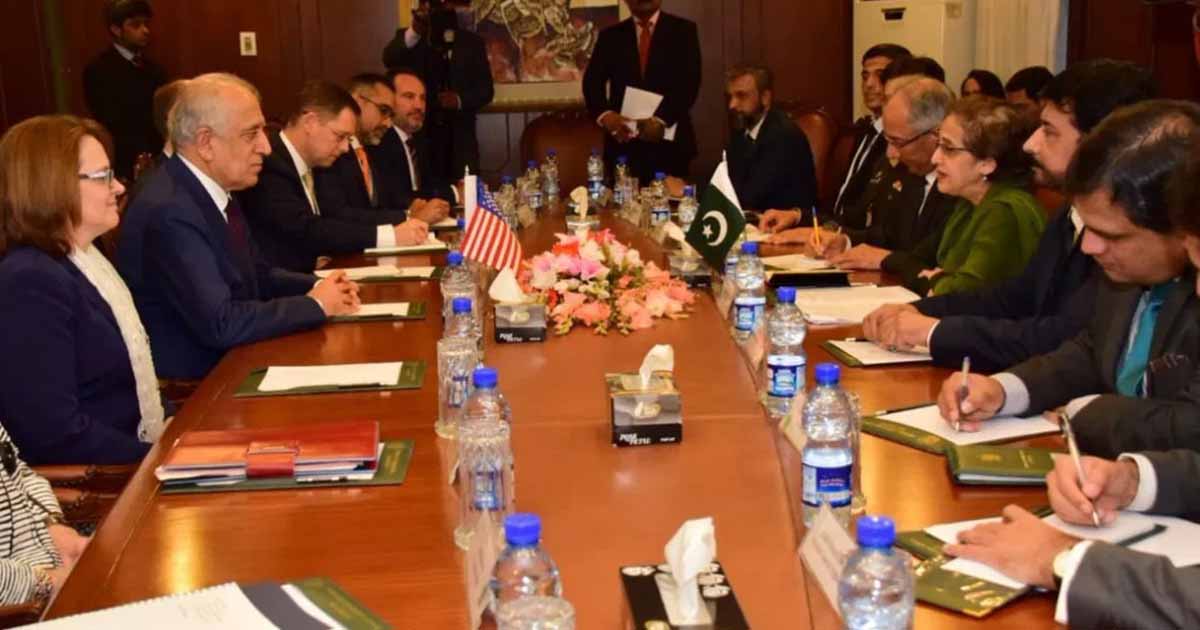 Zalmay Khalilzad, US special representative for Afghan reconciliation, alongside Principal Deputy Assistant Secretary of State, South, and Central Asia, Alice G Wells were received by a Pakistani delegation upon their arrival in the capital on Monday.

Dr. Muhammad Faisal, the spokesperson of the Foreign Office, informed that this high-level US delegation was received at the Ministry of Foreign Affairs, and delegation-level talks are underway.

Earlier, Dr. Faisal had informed that Ambassador Khalilzad and Wells would be meeting Pakistani officials as part of the “regular consultations on the bilateral relationship and Afghan peace process”. Media speculations have revealed that Islamabad has put forward the issue of regional security agendas as a crucial topic for contemplation during these delegation-level talks. The US representatives and Pakistani authorities will also be reviewing multiple opportunities for improving relationships, cooperation, and trust between the US and Pakistan.

Ambassador Wells’s previous visit to Islamabad, in November 2018, was marked with an agreement of cooperation and diversified bilateral relations between the US and Pakistan, and the two countries had agreed to join forces in promoting their vision of stability and peace across the region.

The FO reported that during her last visit, Ambassador Wells had also acknowledged the shared vision of Foreign Minister Shah Mehmood Qureshi and US Secretary of State Mike Pompeo to enter a new phase of US-Pakistan relations, fueled by mutual trust and respect.

Last week, Ambassador Khalilzad had commended Prime Minister Imran Khan for his positive statement on the Afghan situation, and urged Pakistan to have a “leading role” in stabilizing and “transforming the region”.

Ambassador Khalilzad tweeted on Friday, “Greatly appreciate @ImranKhanPTI’s statement yesterday on #Afghanistan. His appeal for reduction of violence and policy against promoting internal conflict in other nations has potential to positively transform the region and give #Pakistan a leading role.”

Greatly appreciate @ImranKhanPTI’s statement yesterday on #Afghanistan. His appeal for reduction of violence and policy against promoting internal conflict in other nations has potential to positively transform the region and give #Pakistan a leading role. https://t.co/VATrqWhTg2— U.S. Special Representative Zalmay Khalilzad (@US4AfghanPeace) April 26, 2019

Khalilzad’s tweet came in response to Prime Minister Imran Khan’s statement of being fully supportive of the Afghan peace process, and particularly, a dialogue between Kabul and the Taliban. PM Khan stressed that Pakistan will not continue to be involved in any “internal conflict” in Afghanistan, and added, “Pakistan has fully engaged its diplomatic, security and other channels to ensure the success of the Afghan peace process.” PM Khan had stressed that peace in Afghanistan is essential to ensure peace across the region and a stable Afghanistan is important to make sure Pakistan’s tribal belts remain free of violence and unrest.

CJP orders PIA MD’s to be placed on ECL

How Should Pakistan Measure its Success at the UN?