A report released by the United States of America’s State Department accused India of mistreatment of religious minorities, Muslims and Dalits. 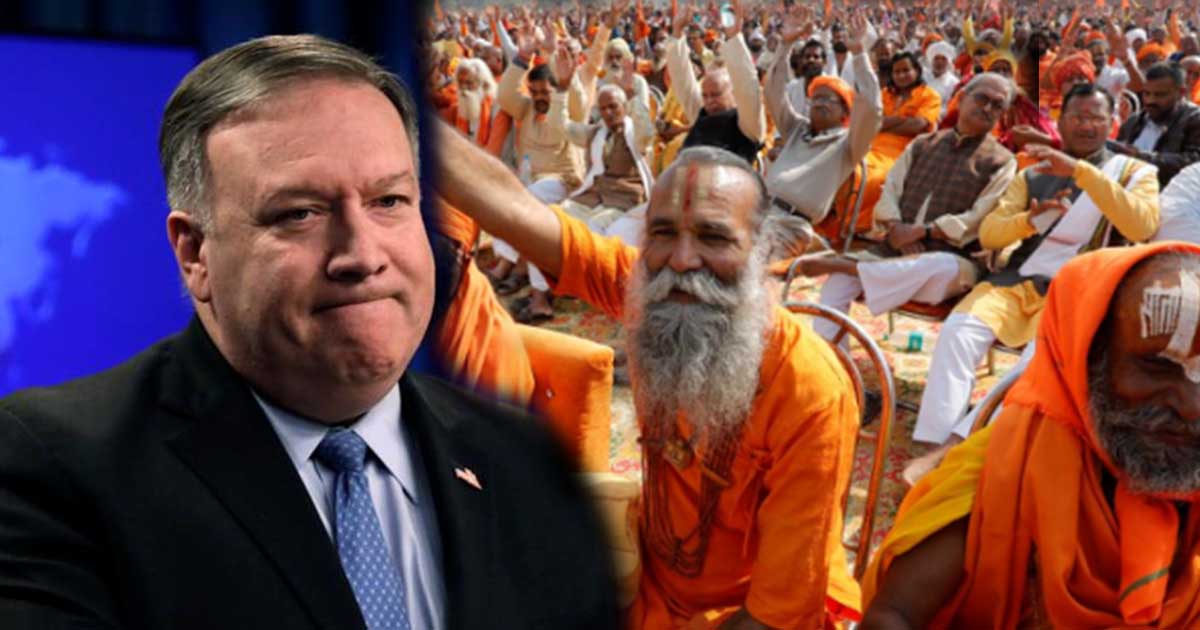 The 2018 Annual Report on International Religious Freedom released by Mike Pompeo, US Secretary of State, on Friday stated that Hindu-groups had used “violence, intimidation, and harassment” against Muslims and low-caste Dalits in 2017 to force a religion-based national identity.

But the Indian authorities have rejected the report, saying that there’s no right “for a foreign entity/government to pronounce on the state of our citizens’ constitutionally protected rights”. The India foreign office also claimed that “India is proud of its secular values.” But for many analysts, facts on the ground paint a completely different picture where, on a regular basis, Muslim youths are taken out of their houses and beaten up till they die.

Muslims are the most vulnerable target to the extremists in India who offer them two options; become Hindu or leave the country.

Rights groups have already shown their reservations over the stance of Indian government and its patronage to Hindu extremists who wish to convert Muslims to Hinduism or force them to quit India. Former Chief Minister of Jammu and Kashmir, Mehbooba Mufti, has asked the Indian government on multiple occasions not to violate secular values of the constitution if India desires to remain a stable and harmonized society.

The report is important in sense that a BJP government has assumed office in India once again. Prime Minister Narendra Modi was able to sell out his anti-Pakistan and anti-Muslim narratives to proclaim a great victory.

Muslims are under Threat in PM Modi’s India

Since after the electoral win of Indian Prime Minister Narendra Modi in 2014, the country has been undergoing a massive socio-political change and moving towards an extremist Hindu state. Media reports suggest that freedom is under threat in India where secular values are being replaced with extremist Hindu ideologies where religious minorities enjoy little space to practice their religious teachings.

Read more: Muslims in India continue to suffer at the hands of Hindu…

Muslims are the most vulnerable target to the extremists in India who offer them two options; become Hindu or leave the country. “First, a campaign was launched to convert religious minorities to Hinduism. The right-wing groups called it ‘home-coming.’ Now, they are demanding bans on certain books and beef eating. Those who don’t listen to these groups are being targeted every now and then,” Rakesh Batabyal, an associate professor at the Centre for Media Studies in New Delhi, told an international media outlet.

Senior leader of Peoples’ Democratic Party (PDP) Muzaffar Hussain, last year expressed his anger and warned Indian leadership of one more partition if atrocities against Muslims are not stopped. “I want to tell Prime Minister Narendra Modi that he should put an end to the killing of Muslims in the name of cow slaughter. This country has once been partitioned into two, and there can be more partitions if killings of Muslims are not stopped immediately,” Mr. Hussain stated.

Markandey Katju, a former Indian Judge, has recently said that Indian democracy is under threat not because of Muslims or Pakistan but solely because of sitting Indian Prime Minister who is turning India from a secular state to an extremist Hindu state.