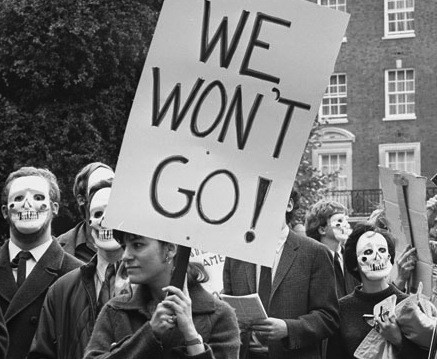 This past weekend, Major Brent Taylor was killed in action in Afghanistan, where the U.S. government has now been waging war for 17 long years. At the time he was killed, the 39-year-old Taylor was training an Afghan security force. One of his trainees turned his gun on Taylor and shot him dead.

Taylor, however, wasn’t only a soldier. He also was serving as the elected mayor of North Ogden, Utah. A member of the National Guard, Taylor gave up his post as mayor to serve the 4th tour in Afghanistan. He leaves behind a wife and 7 children, whose ages range from 11 months to 13 years. Not surprisingly, today interventionists are making the standard announcement — that Taylor died for God, family, and country.

Taylor’s mindset was reflected by one of his posts on Facebook: “There are three great loyalties that have guided by life and everything in it: God, family, and country. “

The truth though is that Taylor didn’t die for any of those things. Instead, he died for empire and intervention, which are not the same as God, family, and country. It’s just that interventionists want so desperately to find meaning in this man’s death, especially for the sake of his wife and children, that they have to convince themselves to believe a false reality, one that holds that Taylor died for God, family, and country rather than for empire and intervention.

Interestingly enough, prior to Taylor’s death, his wife Jeanne told a local newspaper, “I joke with Brent that he’s either a visionary or crazy. I’m banking on the fact that he’s visionary.” But there is actually a third possibility that Mrs. Taylor apparently failed to consider: that her husband was simply naïve.

Read more: US soldier killed in action in Afghanistan

It is clear that Taylor, like so many other Americans, bought into the national-security state’s concept of foreign empire and intervention. Taylor’s mindset was reflected by one of his posts on Facebook: “There are three great loyalties that have guided by life and everything in it: God, family, and country. “

That, of course, is the standard mindset that the U.S. national-security state has inculcated into countless Americans, especially the troops — that U.S. soldiers who are killing and dying in America’s foreign wars and foreign interventions are doing so in the service of God, family, and country.

The problem is that it’s just plain false. No U.S. soldier who has killed people in Afghanistan or, for that matter, Iraq, Syria, Yemen, Vietnam, Panama, Korea, Grenada, etc., killed or died in those places defending God, family, and country.

Where the Pentagon, the CIA, and the NSA have been so effective is with propaganda and indoctrination. They have convinced countless Americans that foreign empire and intervention equate to God, family, and country.

Keep in mind, after all, that no one in those countries ever invaded the United States and attempted to conquer our country. Instead, it has always been the U.S. military and the CIA that have invaded or intervened in the affairs of those countries. At the risk of belaboring the obvious, when one nation is the invading power, it cannot be said to be defending itself against the country it is invading. It is the nation that is being invaded that is the defending power.

Even the 9/11 attacks, which were used as the excuse for invading both Iraq and Afghanistan, were not an attempt to invade or conquer the United States. They were nothing more than “blowback” from previous U.S. interventions in the Middle East, such as the 11 years of sanctions on Iraq, which killed hundreds of thousands of Iraqi children.

Ever since World War II, the federal  government has been structured as a national-security state, a totalitarian-type of structure that consists of a massive, permanent, and ever-growing military establishment, one that President Eisenhower referred to as the “military-industrial complex.”

The national-security state also consists of the CIA, which has the power to indefinitely detain, torture and assassinate people, including Americans. And it also includes the NSA, which wields the power to conduct secret surveillance on the citizenry. Eisenhower warned Americans that this type of governmental structure posed a grave threat to their liberties and democratic processes.

Combined with a national-security state governmental structure is a foreign policy based on empire and intervention, one that involves installing pro-U.S. regimes around the world and controlling their actions through extensive foreign aid. It involves invasions, wars of aggression, coups, kidnappings, torture, murder, and partnerships with brutal dictatorial regimes. Iran, Iraq, Afghanistan, Chile, Egypt, and Saudi Arabia are only a few of many examples of this phenomenon.

Where the Pentagon, the CIA, and the NSA have been so effective is with propaganda and indoctrination. They have convinced countless Americans that foreign empire and intervention equate to God, family, and country. That’s where the naiveté comes into play. Whenever a soldier kills or dies in one of these foreign escapades, his mindset tells him that he is doing so for God, family, and country, when in fact he is doing it in the service of empire, intervention, and national-security statism.

It’s also worth mentioning that the U.S. Constitution, which every soldier takes an oath to support and defend, requires a congressional declaration of war before the president and his army are legally permitted to wage war. Yet, Congress has never declared war on Afghanistan. That means that Taylor died waging a war that is illegal under our form of government.

Unfortunately, Taylor will not be the last U.S. soldier to be killed in Afghanistan. There will be more. And there will be more lies about what they died for. When a sufficient number of Americans finally come to the realization that empire, interventionism, and national-security statism are different from God, family, and country, the American people will stop letting their soldiers kill and die in faraway foreign lands.

Iran and Afghan Taliban: A marriage of convenience or something bigger?

Nakamura’s efforts for peace in Afghanistan: Alive even in death