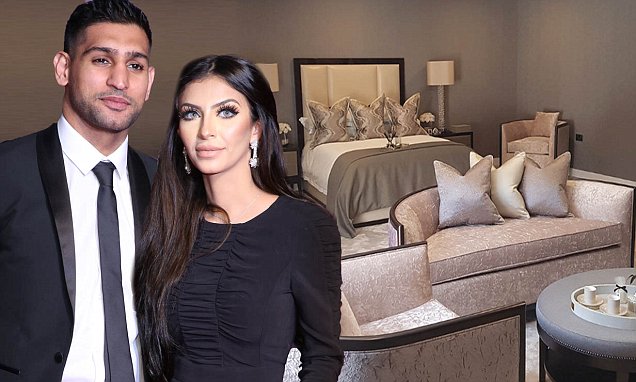 Khan who is set to appear on the reality TV show “I’m a Celebrity, Get me out of here” put his mansion on sale earlier in June this year while the news of his divorce from the wife was circulating on social media.

Real estate agency, Cardwell’s, confirmed the property in Lostock, Lancashire had been taken off the market but did not mention the reason for withdrawal.

However, it seems that the dust has settled down between the pair. Khan is planning to restart his life with wife Faryal Makhdoom, and daughter Lamaisah in this luxurious mansion.

The mansion has six bedrooms, a large swimming pool decorated with the mosaic of a pair of gloves with the initials AK on them. It also includes a hot tub, steam room, and gym.

The living room also has a cinema with a few leather sofas.  Another L-shaped bungalow with four bedrooms was a part of this property that was advertised for sale.

Khan is in Australia these days to participate in a reality show. In the past few months, he and his wife made it to the headlines several times following their public fight.

Last week Amir, however, broke the news on his Instagram account, stating that he’s back with his “4-month pregnant wife, after sorting out all the issues. Closing the year with a happy ending”

Faryal Makhdooms post on Sunday furthered the claims at a reconciliation with her husband Amir Khan. She uploaded a picture on her Instagram with her three- year old daughter Lamaisah and Amir Khan. The picture was captioned, “We’re going to be doing this all over again.”

The news of reconciliation was shocking for the people since the couple was expected to be officially divorced in next few weeks.