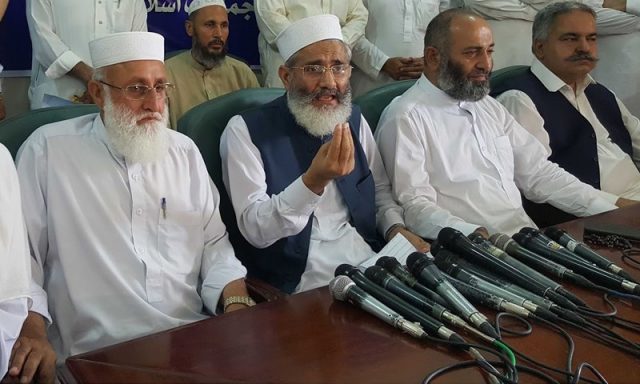 The 3rd March Senate elections turned out to be a huge surprise for the nation as the seats won by parties were not proportional to their representation in the constituent assemblies. While some parties were busy finding the fault in their stars, others were quick to start the blame game and accused their rivals of massive horse trading. One such party was Jamaat-i-Islami (JI). Its chief, Senator Sirajul Haq, went a step ahead and appealed to the Chief Justice (CJ) of Pakistan to take notice of the anomalies in the Senate elections.

Speaking at the Karachi press club on Sunday, Siraj demanded that every senator should submit an undertaking before taking their oaths as senators that they did not bribe, or use unfair means to woo parliamentarians to vote for them. He further stated that if they fail to do so, they shouldn’t be allowed to take the oath.

“The apex court should also play its active part. There is no need for making statements on oath by judges. The judgements should be transparent enough to convince all stakeholders. When such judgements will be delivered, the entire nation will support them,” stated Siraj.

PML-N, which suffered the biggest upset in the elections, can take the help of the SC against the horse traders but that would be synonymous to putting aside their difference with the judiciary, a stance around which their whole ideology has revolved in the recent months.

The Pakistan Tehreek-i-Insaf (PTI) chief Imran Khan joined Siraj in his demand for the Supreme Court to take notice of the irregularities in the Senate election. Khan held a press conference on Monday outside his Bani Gala residence. He declared that the Senate elections were a negation of democracy and lamented that a lot of people, even in KP, sold themselves out for money. Khan further accused the Sharif family of transferring 900 billion outside Pakistan through money laundering.

The Senate elections shook the foundation of many parties while strengthening the others. Pakistan Muslim League-Nawaz (PML-N) turned out to be the winner in the elections after bagging 15 seats, 11 in Punjab, 2 in Khyber Pakhtunkhwa and 2 in FATA, but the elections are considered to be a defeat for them since they won 18 seats in the 2015 Senate elections. The party failed to win any seats in Balochistan where it is in the majority. Six independent candidates won by the support of the dissident PML-N group which took down the PML-N government in the province.

The Pakistan People’s Party (PPP) turned out to be the biggest winner in the Senate elections after winning 12 seats. The only managed to win 8 seats in the 2015 Senate elections. They won 2 seats in Khyber Pakhtunkhwa where they only have 7 MPAs and won 10 seats in Sindh, bagging 3 seats that were previously won by the Muttahida Qaumi Movement-Pakistan (MQM-P). The chiefs of PTI and MQM-P, Imran Khan and Farooq Sattar respectively, accused PPP of massive horse trading and buying off votes.

Senate elections yet again witnessed shameful horse trading where MPAs bought & sold their votes as country witnessed this sale of their "elected" ppl to highest bidder. This shows moral decline of our political class. In which Western democracy does such a sale happen?

The third biggest party in Pakistan, the PTI managed to win 6 seats, the same number that they won in 2015 Senate elections. However, this time they also managed to win one seat from Punjab even though they had only 30 MPAs in the assembly, not enough to win a seat and caused a huge upset to PML-N. On the other hand, they lost one seat to PPP in the Khyber Pakhtunkhwa assembly. It is reported that some PML-N MPAs from Punjab assembly voted for PTI while some PTI MPAs in KP assembly voted for PPP and PML-N helping them win extra seats.

The demand that Sirajul Haq has put forward for the CJ to take notice seems to be a feasible solution to figure out the inconsistency of the Senate elections but which parties would support the Supreme Court?

By far the biggest loser in the Senate elections turned out to be MQM-P, they only managed to win 1 seat among the 5 candidates that they contested even though they won 4 seats in the 2015 elections. The infighting among the MQM-P leader is blamed for the party loss but the MQM-P leaders have accused the PPP for buying off their MPAs. The dissident MQM-P members who joined PSP also voted against it, resulting in a humiliating defeat for the third biggest party of Pakistan.  Other than these, 10 independent, two candidates of the Jamiat Ulema-i-Islam-F, Pakhtunkhwa Milli Awami Party and National Party each, one candidate from each of the Jamaat-i-Islami and PML-F managed to win.

Read more: Win in Senate elections may pave way for PML-N to legislate…

The Senate elections have put a huge question mark on the whole procedure of electing members. Parties who claim to be the custodians of democracy in Pakistan were the ones at the front of the massive horse trading. Political experts believe that the spirit of democracy dies out when external forces are allowed to intervene in elections. The mandate of the people is lost because of the power hungry politics of a few individuals. The question at hand is that what would be done about the elections? Contrary to the general elections, there can be no appeal against rigging in the Senate elections since the votes are anonymous.

The Senate elections have not only devalued the Senate but the entire political class. https://t.co/ZwJJhMx8l0

A big dilemma is created since if the identity of the voters is revealed to find out who sold their votes, it would destroy the sanctity of the vote and if they don’t do so, it would still destroy the sanctity of the vote. The demand that Sirajul Haq has put forward for the CJ to take notice seems to be a feasible solution to figure out the inconsistency of the Senate elections but which parties would support the Supreme Court? The PML-N is already at war with the judiciary, accusing them of overstepping their boundaries. Recently, the PPP also joined them to some extent in their tirade.

PML-N, which suffered the biggest upset in the elections, can take the help of the SC against the horse traders but that would be synonymous to putting aside their difference with the judiciary, a stance around which their whole ideology has revolved in the recent months. Even if they knock the doors of the judiciary, they might also find some anomalies within their own party since they managed to win more seats in KP than their representation. Media analysts believe that there isn’t much choice left for any party but to accept the outcome of the elections and work towards a more transparent election system.

Social media vs PTA: What platforms has Pakistan banned over the years?

US moves against Iran raise spectre of wider regional conflict