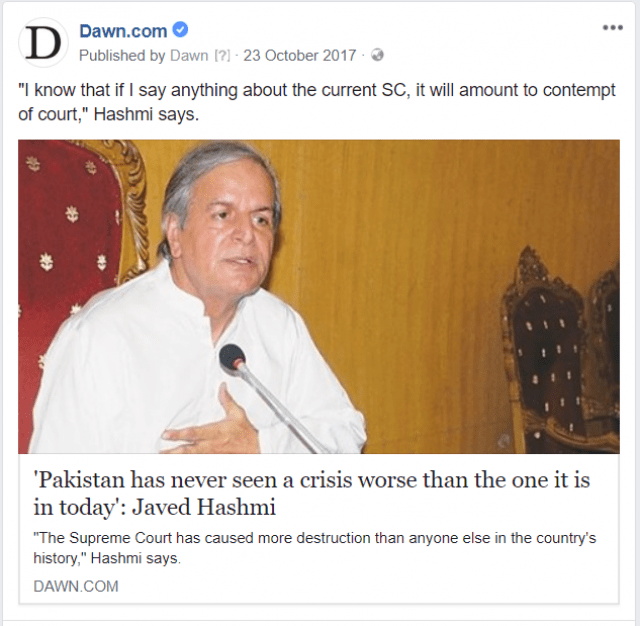 The senior leadership and ‘loyalists’ are frequently parting their ways with Sharifs and the Pakistan Muslim League-Nawaz. After Chuadhry Nisar Ali Khan and Zaeem Qadari, Chaudhry Abdul Ghafoor has also decided to quit the party and declared a ‘war’ on Sharifs. Mr. Ghafoor, along with his clansmen Mayo, was addressing a press conference in Lahore Press Club when he termed Nawaz as ‘anti-Pakistan’ for establishing a narrative against the integrity of the state institutions.

Ghafoor also stated that he “cannot support a leader who rubs shoulders with the butcher of Gujarat Narendar Modi. While slamming Nawaz Sharif, who is known as the friend of Indian Prime Minister Narendar Modi, the former PML-N leader said that “he who keeps Modi closer is a traitor to the Muslim Ummah. We will stop the friends of Modi.”

While commenting on Nawaz’s anti-army stance, Ghafoor also clarified that “a fifth generation war has been waged against the institutions of Pakistan,” the former provincial minister also acknowledged the sacrifices of soldiers who, in his view, ‘give their lives to protect us’. Since the armed forces of Pakistan enjoy unwavering support from the people across the country, the former minister remarked that “the people won’t let anyone weaken state institutions.”

The PML-N is dominated by the Sharif family. Now the party is, however, widely criticized for following a family-centered approach and ignoring loyalists who sacrificed their time and money for the party and continuation of democratic process in the country.

The ousted Prime Minster Muhammad Nawaz Sharif has been facing political backlash since he gave a controversial interview to the Dawn. Nawaz criticized Pakistan’s security institutions for allegedly allowing terrorists to carry out attacks against others; he was referring to Mumbai attacks. Nawaz Sharif was amidst controversy and criticism for his reckless and misleading statements against Pakistan. His allegations were also denounced by some PML-N leaders who did not want confrontation against the armed forces and the judiciary.

Moreover, like many other critics of PML-N, Ghafoor also alleged the party for giving tickets to ‘criminals and land mafia’ for their vested political interests. “I advised Nawaz Sharif to not give tickets to land mafia,” he said. The PML-N is being attacked by its own party members and independent analysts for failing to give tickets to those who truly deserved it. The tickets have been given ‘on the basis of personal liking and disliking of Sharifs.’

Ghafoor also said that the PML-N tried to amend the Khatm-e-Nabuwwat clause which he [Ghafoor] was not expecting. “The PML-N government during its tenure brought changes in Elections Act 2017 and tried to omit a Khatm-e-Nabuwwat oath from lawmakers,” he said. “I wanted to leave the party after the model town incident and when they hanged Mumtaz Qadri,” but could not quit. But now it is the time, said disgruntled PML-N leader to part his ways with Sharifs.

Mr. Ghafoor, along with his clansmen Mayo, was addressing a press conference in Lahore Press Club when he termed Nawaz as ‘anti-Pakistan’ for establishing a narrative against the integrity of the state institutions.

“All these actions of the Sharif family are against Pakistan. I cannot afford to remain part of such a party which is against the country,” said Ghafoor while formally leaving the party he was a member of for almost last 28 years. Ghafoor further seconded the words of fellow disgruntled PML-N leader Zaeem Hussain Qadri and said, “Shehbaz Sharif! Lahore is not the land of your father. The same is the case with Pakistan. Pakistan does not belong to the Sharif brothers rather it belongs to all of us.”

Nisar Ali Khan, a senior PML-N leader and former Interior Minister, has also bashed at the Sharif family for being ‘self-centered’ and ignorant about the ongoing political change across the country. Nisar was not willing to work under the leadership of the former Prime Minister Nawaz Sharif’s daughter Maryam Nawaz. He told media many times that he could not work ‘under the leadership of children’. Later on, the party asked Nisar to appear before a parliamentary committee of the PML-N to seek a party ticket. Nisar, however, being a senior party leader declined to appear before any committee and decided to contest the upcoming general elections independently. The PML-N has also filed its own candidate against Nisar Ali Khan.

Later on, Zaeem Qadari, the former spokesperson of the Punjab Government and a senior leader of the party, also showed his displeasure and left the party. Qadari, a veteran politician, has always been at front to defend the PML-N. But Hamza Shehbaz, said Qadari, wanted him to be a slave which he [Zaeem Qadari] can never do, he clarified. He challenged Hamza Shehbaz and told him that ‘I cannot polish your boots’.

The PML-N is dominated by the Sharif family. Now the party is, however, widely criticized for following a family-centered approach and ignoring loyalists who sacrificed their time and money for the party and continuation of democratic process in the country.

Furthermore, dissenters within the party are not comfortable to work under the leadership of Hamza Shehbaz or Maryam Nawaz. Like Nisar Ali Khan, Zaeem Qadari is also not willing to call Hamza his boss. As a matter of fact, Imran Khan has successfully campaigned against Sharifs’ dynastic politics which resulted in more awareness and political consciousness among the masses. It led to the demand of more democratic and inclusive decision makers within the party and parliament.

What would count as valid or invalid vote: clarified by ECP