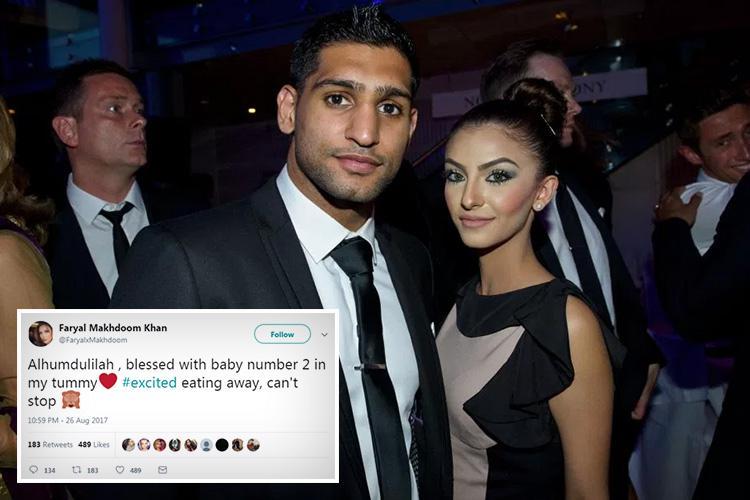 Nothing can be more dramatic than the twist and turns that are happening in the lives of this couple; boxer Amir Khan and his wife Faryal Makhdoom. Weeks after the news of the split, Faryal Makhdoom on Saturday 26th June took to Twitter to inform about her second pregnancy.

Alhumdulilah , blessed with baby number 2 in my tummy #excited eating away, can’t stop

Earlier this month, the couple had a ferocious exchange of tweets when Amir Khan officially announced about the couple parting ways. Earlier, it was thought that the tweets are fake before Amir Khan released a video on Snapchat in which he owned his tweets.

In the tweets, he openly expressed his ire over Faryal’s alleged links with another boxing celeb Anthony Joshua.

So me and the wife Faryal have agreed to split. I’m currently in Dubai. Wish her all the best.

Faryal moved on quick. Always mentioned to me how much she wanted to be with another guy, from all people another boxer @anthonyfjoshua pic.twitter.com/1GBAQnvzMC

And as expected by the alleged boxer, Anthony intervened in the story and tried to clear the mess.

Such tweets not only brought disgrace to Amir but now the world knows about the tensions that existed between the couple and the reasons which caused the split.

@anthonyfjoshua glad all is cleared up and all lies. I got angry like any man would. No truth to it. Good to know. All the best https://t.co/mYV3mdLtR6

Amir Khan, however, faced huge criticism from his fans and followers alike for publicly humiliating his wife. Meanwhile, Faryal expressing deep resentment over Amir’s tweets opted not to directly reply to his tweet.

Instead, she publicly informed about enjoying her best time with her daughter, family, and friends despite parting ways with her husband, Amir Khan.

Don’t wait for an apology or acknowledgement of your pain.         Feel it. Let it leave you. And move on.

The controversy seemed to have finally ended but Faryal Makhdoom’s tweet about her pregnancy have once again made fans talk of the Amir-Faryal fiasco. Fans and followers are however anxiously waiting for boxer’s reaction on her tweet and are also anticipating for a patch up between the couple, about which the couple has remained silent for long.

Previous articleThe US whips up tensions in South Asia; Delhi’s NSG membership to be pushed
Next articlePersonalities vs institutions in Pakistan: An endless struggle for dominance

29 July 2021
Previous articleThe US whips up tensions in South Asia; Delhi’s NSG membership to be pushed
Next articlePersonalities vs institutions in Pakistan: An endless struggle for dominance

US urges Pakistan to move against Haqqani network