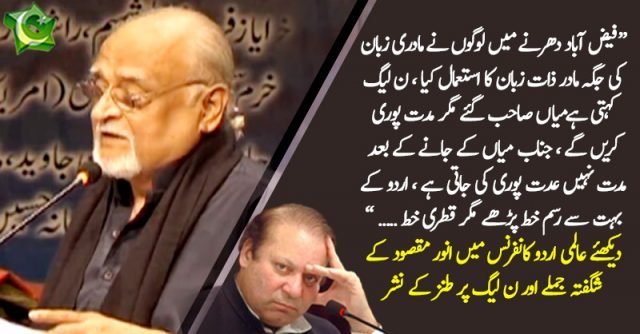 The maestro of satire Anwar Maqsood took a dig at ousted former Prime Minister Nawaz Sharif on his birthday on 25th December with some hilarious poetry.

While addressing a gathering, Anwar Maqsood mocked Nawaz Sharif by using his famous line ‘Mujhay Kyun Nikala’ in his poetry.

The gathering absolutely loved his satirical comments and applauded. Many of them supported him on Twitter as well.

Anwar Maqsood at his best….. pic.twitter.com/y6rATNmxu0

He, later on, spoke on Faizabad Dharna and ISI as well in the same gathering.

Anwar Maqsood is one of the best in Pakistan when it comes to satire. His satirical programs and poetry on the changing political situation in Pakistan are cherished by the masses.

One of his shows ‘Loose Talk’ with late Moin Khan was one of the famous programs of its time.

Anwar Maqsood is particularly known for taking a balanced approach in his comedies, ensuring to meet all the ethical standards that are missing these days. His drama ‘Aangan Terha’ from the evolutionary stage of the television industry in Pakistan is still liked and watched by younger as well as older generation. As far as Nawaz Sharif is concerned the nation of Pakistan really hopes that he may eventually get answers to his question ‘Mujhay Kyun Nikala’ in 2018.

Opposition buoyant as the Panama judgment is reserved