Since 9/11, Pakistan had suffered hundreds of terrorist attacks across all its cities. An estimated 70,000 men, women, and children perished - at times 100 in a day. But yet nothing had prepared a nation of 200 million for the savage brutality that was on display in Army Public School, Peshawar, on Dec 16, 2014.

When dreams were shattered

December 16, 2014, was the first day of six-year-old Khaula Bibi at the Army Public School, Peshawar, that proved to be her last too. Khaula, the youngest and the only female student, who was killed in the horrific attack at the APS school, died when shooters of the Tehreek-e-Taliban Pakistan (TTP) stormed the school building early morning and opened indiscriminate firing that left total 144, including 134 students, dead and over 100 others injured.

Khaula’s father, Altaf Hussain, a teacher at APS who survived the attack, told Dawn that it was Khaula’s first day at school after she got admission to Class One a day earlier. Hussain said she was excited to study at the same school where her siblings Samar (12), Shobaid (11), Areeba (4), were earlier enrolled. Hussain recalls that firing started when he, along with his daughter, were completing admission formalities.

Asking another teacher to take care of his daughter, he ran out to confront the attackers. The assailants sprayed bullets in response and moved ahead. Despite eight bullets in his body, Hussain crawled himself to a nearby room and locked from inside before being rescued by the army personnel. It was then he came to know that his daughter and the teacher were killed. The family was shattered.

Among several unanswered questions, the most significant was how TTP managed to attack a school located safely inside the heart of the garrison area in Peshawar city from its bases in Afghanistan – that too, using Afghans, Chechens, and Arabs. Many, wonder, what role was played by Afghan and Indian Intelligence agencies?

He is in a casket now,” AP news had quoted a distraught father, Tahir Ali, as saying. While receiving the body of his 14-year-old son Abdullah from the hospital, he had said: “My son was my dream. My dream has been killed.” An estimated 1100 people, including students and staff members, were present in the school at the time of the incident.

The terrorists entered the school premises after scaling a rear wall and resorted to indiscriminate firing on pupils – and anyone who came in their way. Most students were children of military personnel. 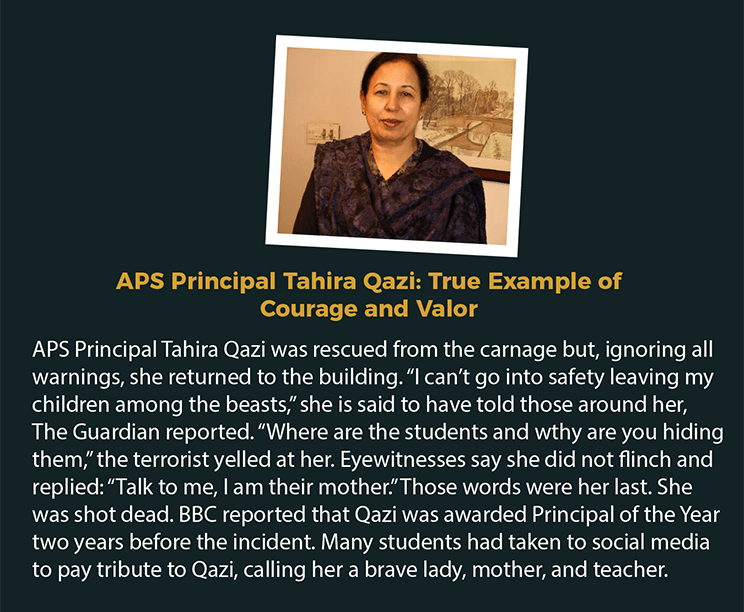 First, the attackers, armed with grenades and automatic rifles, barged into the main assembly hall where a large group of students, was taking a lesson in first aid. Next, they went to the classrooms and targeted teachers and students. There was no attempt to take hostages; they sought only to kill.

Before scaling the wall, some reports suggest, they created a distraction for school guards by blowing up their vehicle parked outside the school building. After some delay, commandos from the Special Services Group (SSG) reached and killed the attackers ending more than seven-hour rampage by the attackers. The SSG operation saved around 950 lives.

Following the attack, TTP, through its spokesman and leaders, claimed responsibility for the massacre and tried to justify it as retribution for violent government attacks on its people. Most Pakistani analysts conclude that the most probable provocation was Operation Zarb-e-Azb, a government anti-militant offensive in North Waziristan, one of Pakistan’s tribal regions. 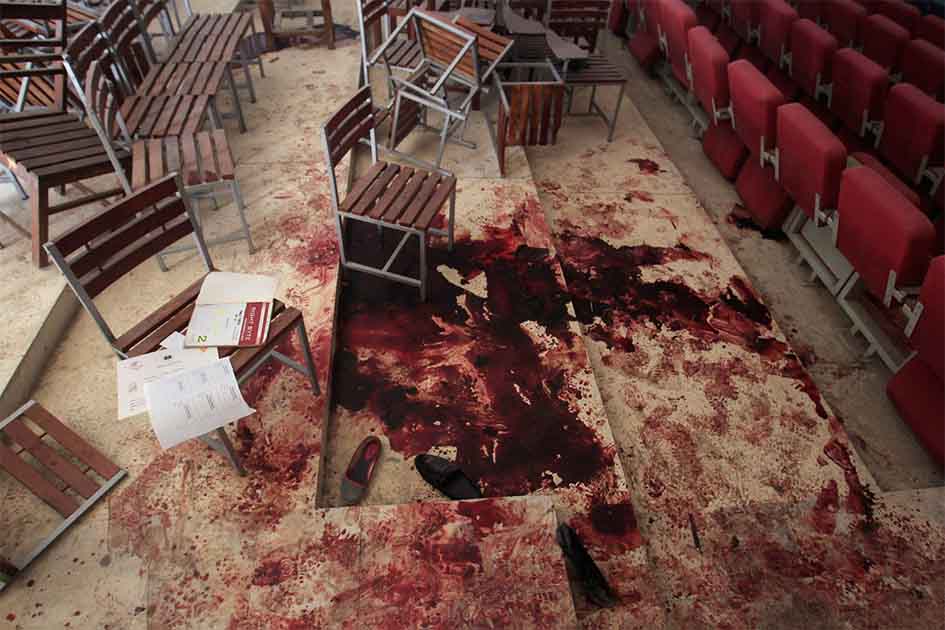 A 2019 report of the United States Department of Defense concludes that there are around 3,000 to 5,000 TTP militants still present in Afghanistan. In the last week of December 2014, The Express Tribune, Pakistan’s leading English paper, reported that a confidential intelligence report had revealed the names of the militants killed in the APS school massacre.

They were identified as Abuzar, Omar, Imran, Yousaf, Aziz, Chamnay, and Qari. The report also confirmed that the attack was a revenge for the military operations in North Waziristan and Khyber Agency as well as an attempt to avenge the death of a brother of militant commander Qari Shakil, who was killed in a drone attack in Waziristan. Qari’s brother was also said to be an aide of TTP commander Hafiz Gul Bahadur.

Read more: Set on a Journey of Undefeated Dreams – Interview with APS Survivor

British newspaper The Independent had reported that the APS attackers were all foreign nationals, including a Chechen, three Arabs, and two Afghans. Pakistan, since 9/11, had become used to suffer terrorism, but APS attack and merciless killing of young children shook Pakistan like never before. The then government of PM Nawaz Sharif and all other political and religious parties set aside their differences and became united in their firm resolve to do everything to wipe out terrorism. 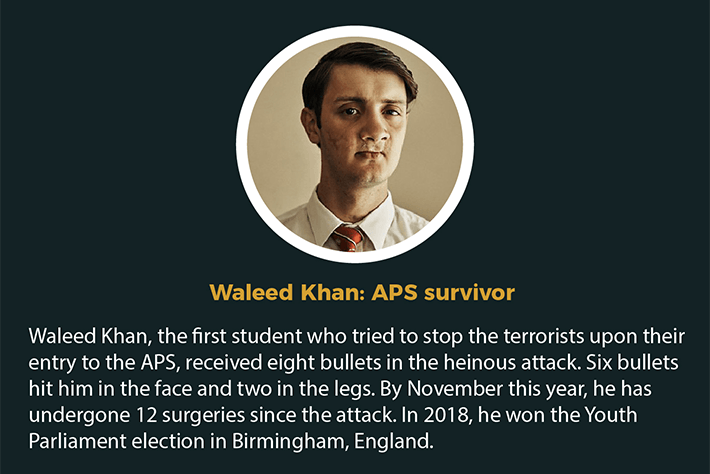 The government, with the support of its opposition, ended a six-year moratorium on the death penalty, reinstating its use for terrorism-related cases. Days before the first anniversary of APS carnage, the military courts sentenced four militants to death for their involvement in the school attack and other terrorist activities.

They were identified as Hazrat Ali, Maulvi Abdul Salam, Mujeebur Rehman alias Najeeb ur Rehman, and Sabeel alias Yahya, and hanged in the Kohat district prison after the then army chief Gen Raheel Sharif had issued their black warrants on November 30, 2015.

Read more: Remembering APS: A tribute to those ‘who never came back’

On August 13, 2015, the Inter-Services Public Relations had announced their convictions saying they belonged to a splinter group of TTP, Toheedwal Jihad Group. These were the first executions of terrorists convicted by military courts after the parliament adopted the Constitution (21st Amendment) Act 2014, paving the way for trials of terrorists by military courts.

Even Al-Qaeda burst with pain over APS massacre

Strange as it may sound, but the barbaric killing of innocent children melted the hearts of those who have been on a killing spree across the world for years now. Soon after the incident, Al-Qaeda’s regional branch said their hearts were “bursting with pain” over the Taliban’s massacre at a school in Peshawar. “Our hearts are bursting with pain and grief over this incident,” Osama Mehmood, spokesman for Al-Qaeda South Asia chapter, said in a four-page emailed statement.

How TTP managed to attack from Afghanistan?

Among several unanswered questions, the most significant was how TTP managed to attack a school located safely inside the heart of the garrison area in Peshawar city from its bases in Afghanistan – that too, using Afghans, Chechens, and Arabs. Many, wonder, what role was played by Afghan and Indian Intelligence agencies? It is no secret that Indian agencies have a strong footprint in Afghanistan and enjoy local support from Afghan agencies, NDS.

It is believed in Islamabad that RAW and Afghan NDS have jointly launched several secret operations against Pakistan. Three Indian consulates – Jalalabad, Kandahar, and Mazar-e-Sharif – have often been named. Many thus conclude that this Indo-Afghan Intelligence nexus could be behind the horrendous attack on school children in Peshawar – this idea gets strengthened when Analysts ponder on the date of the attack. 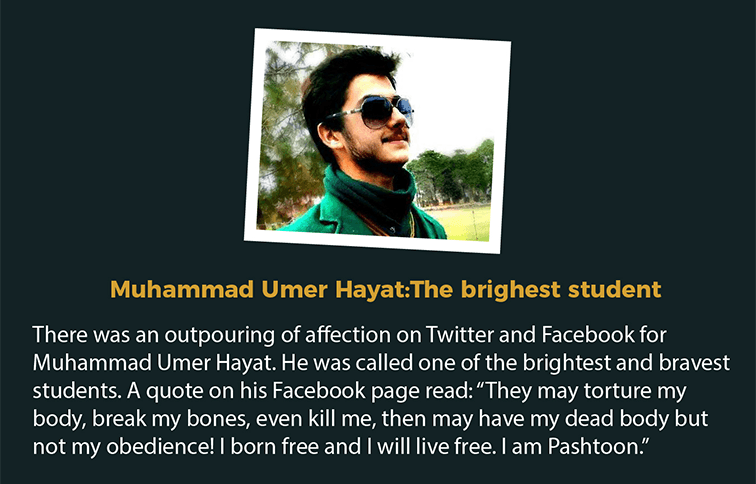 On 16th December 1971, Pakistan Army had surrendered to the Indian Army in Dacca. This painful day for Pakistan Army and the nation has no significance for Pashtun tribals, that constitute TTP militants, but has enormous resonance in the Indo-Pakistani conflict. TTP has a violent and criminal history, and it has been carrying out a bloody campaign of suicide attacks, bombings, and shootings that targeted civilians, security forces and government personnel across the country since 2007.

In 2007, Baitullah Mehsud founded TTP, and later his aide Hakeemullah Mehsud expanded its influence in Waziristan and united armed militia under one banner. After Baitullah and Hakeemullah were killed, Mullah Fazlullah was made TTP Emir; they all wanted to overthrow the Pakistani government and enforce a strict interpretation of Islamic law. TTP had carried out hundreds of attacks against both Pakistani security forces and civilians, including the assault on a school in Peshawar, when it was operating from Afghanistan.

What did the US do?

In June 2018, Pakistani intelligence officials said the group’s leader, Mullah Fazlullah, and four other senior commanders were killed in a drone strike in the Afghan province of Kunar, near the Pakistani border. The spokesman for the United States military in Afghanistan, Lt. Col. Martin O’Donnell, had also confirmed that the military had carried out a drone strike in Kunar, and the target was “a senior leader of a designated terrorist organization.” 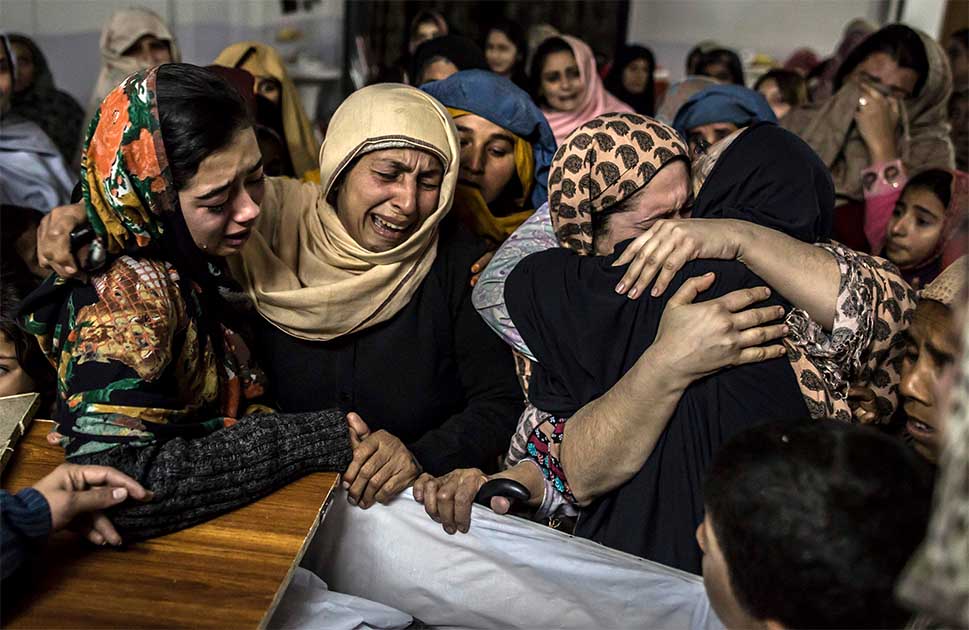 TTP Chief Mullah Fazlullah remained the most-wanted militant in Pakistan for years. Still, his killing in an American drone strike in a border region of Afghanistan raised several questions that have not yet been answered. But many, ponder, if the US reaction to APS terrorism against innocent children was strong enough commensurate with the responsibilities and reach of the sole superpower?

The United States, after 9/11, had put the world on notice by declaring, “With us or against us,” it went to wars, and the world was changed forever. Afghanistan has conquered US territory, the United States army, air force, and intelligence have an unprecedented reach and surveillance ability, but apart from killing Mullah Fazlullah in a drone strike after four years, nothing of resolve was shown by the US.

Rizwan Shehzad is the Assistant Editor, Global Village Space. He has previously worked with The Express Tribune. He tweets at:@RizwanShehxad.

Hungary promised Sweden to ratify its NATO membership next year

Afghan women protest on eve of UN day against violence