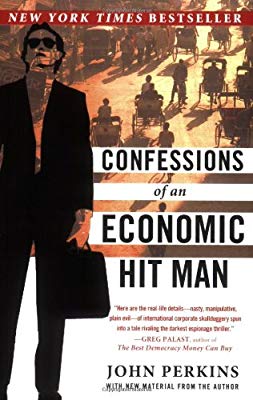 John Perkins, the best selling author of the book ‘Confessions of An Economic Hitman,’ talks of how corrupt rulers of smaller developing nations are entangled in an inextricable debt trap laid by institutions such as the IMF and the World Bank. The crippling debt leads the country into financial insolvency and eventually results in compromising their sovereignty – one way or the other.

Are we also dealing with similar hitmen at the moment?

Just juxtapose Perkin’s narrative with Pakistan’s current financial health; its net public stands over Rs18.28 trillion mark (up about 35per cent Rs13.48 trillion at the end of fiscal year 2012-13).

Additionally, the federal government secured nearly $1.8 billion in fresh foreign loans over in the last quarter of 2016, pushing the foreign debt liabilities beyond $75 billion. Much more alarming; the debt servicing cost Pakistan some $6.5 billion last fiscal year, while the finance ministry data given to the IMF reckons that external debt service obligations will climb to nearly $8.4 billion during 2016-17.

This does not include income on direct investment by foreigners, which adds another $3.6 billion to the burden as per projections in the IMFs 12th review. And debt servicing is likely to surge to nearly $10 billion a year in 2019, once the country begins repayments on the China-Pakistan Economic Corridor (CPEC) related Chinese loans.

watch: We work like the Mafia hitmen: Watch video of John Perkins…

Should it be a cause for alarm?

rulers of smaller developing nations are ensnared in an inextricable debt trap through institutions such as the IMF and the World Bank.

Should it be a cause for alarm, particularly when the government – led by the finance minister – is blowing trumpets of ‘economic turnaround’ on the back of the CPEC? Sakib Sherani, one of the noted economists, questions whether an inherently flawed GDP rate can be used as a yardstick for such chest-thumping? He concurs with the opposite narrative that links “growth in the past three years” to debt accumulation and the decline in oil prices, and “not from structural reform or a surge in private investment, and Pakistan’s overall development and socioeconomic indicators remain abysmal.”

“Pakistan is heading towards a social and economic hurricane that will cause great damage and will sweep away much of the current economy and Pakistan’s assumptions about the future,”

He also rightly asks whether there is at all any link between policy effort and GDP growth? “Fixating itself on the growth in GDP also avoids focus and scrutiny of the government’s spending priorities or its taxation policies, its success or lack of in reducing poverty or corruption or strengthening institutions etc,” he says. How can the economy grow in a sustainable and inclusive way in the absence of serious and meaningful structural and taxation reforms?

The Finance Minister and his constituency – the business community are so well-aware of the issues that are stunting the real growth and blocking revenue collection. Similar questions recently echoed at a gathering of economists in Karachi, most of them centering on the absence of real reform.

Professor Dr Samina Khalil, a director at the Applied Economics Research Centre Karachi, for instance, doesn’t believe in the government narrative at all. “Pakistan is heading towards a social and economic hurricane that will cause great damage and will sweep away much of the current economy and Pakistan’s assumptions about the future,” she said. Missing reform, corruption, fiscal indiscipline and politics of patronage were some of the subjects touched upon during the gathering. All this in fact dove-tailed with what Christine Lagarde, Managing Director of the IMF had said during her Pakistan in October last year.

Corruption, whether real or perceived, Panama or Bahamas, harms the economy and foreign direct investment while honesty, transparency and accountability is the best way to address the issue, Ms Lagarde underscored during a press stake-out. She also advised Pakistan to reduce expenditure and increase revenue collection to bring down its overall debt and debt servicing.

There are not many options when the country wants to address the issue of debt, she reminded the finance managers. The question here is as to whether those on top are bothered at all about sane advice? What is the incentive for reform if the ruling elites and their finance managers are able to keep the big business houses around them through the decadent system of patronage and tax holidays?

Corruption, whether real or perceived, Panama or Bahamas, harms the conomy and foreign directe investment while honesty, transparency and accountability is the best way to address the issue

This system accepts and covers up corrupt practices such as over- and invoicing, through the connivance of the bureaucracy and businesses, who contrive and connive to evade and avoid taxes. Every body – traders, importers, exporters, vendors, hotel/restaurant owners, private hospital owners and those running the government know how to dodge taxes. That is why tax collection remains abysmal. Are they along with international donors acting as economic hitmen to eventually push Pakistan into financial insolvency?

Imtiaz Gul is the founder and Executive Director of the Centre for Research and Security Studies (CRSS), an Islamabad-based think tank. This piece was first published in The Express Tribune. It has been reprinted with permission. The views expressed in this article are the author’s own and do not necessarily reflect Global Village Space’s editorial policy.

Previous articleAll Regional players invited to Moscow to discuss peace in Afghanistan
Next articleKP government introduces a Muslim Board to overview legislation, Education

Deaths and injuries sustained by Kashmiris: Majority vote by staying away from State By-election