Dr. Firdous Ashiq Awan reiterated Pakistan’s desire for peace but also underscored that the Pakistan Army has the capacity, capability and commitment to defend the motherland against any Indian misadventure. 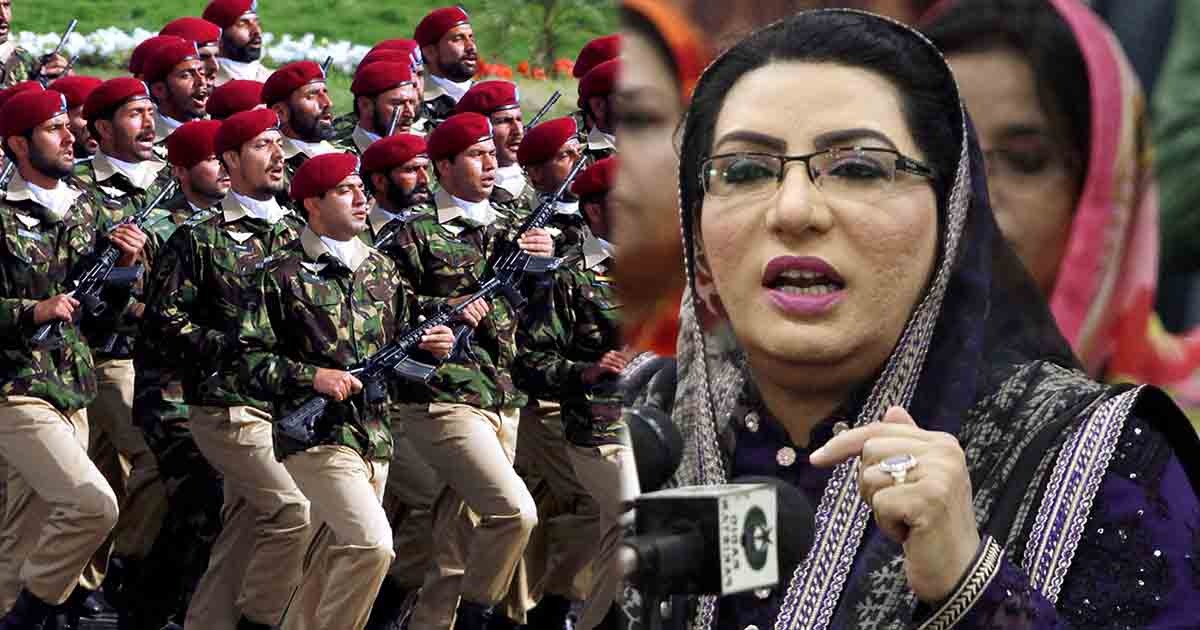 Dr. Firdous Ashiq Awan, Special Assistant to the Prime Minister on Information and Broadcasting, on Saturday, reiterated Pakistan’s desire for peace and stability in the region. However, Dr. Firdous also stressed that if India decides to undertake an aggressive misadventure, the people of Pakistan will rally behind its armed forces.

Speaking to the Canadian-American media platform, Vice News, Special Assistant to the Prime Minister stressed that Pakistan is eager to welcome peace and stability in the region, however, the Hindu-extremism emanating from Modi’s India is adamant on stirring trouble and escalating tensions. She said, “The world would like to see peace in this region.”

We will Defend the Motherland

Dr. Firdous Ashiq Awan stressed that while Pakistan is hopeful and committed towards peace, it is fully capable of defending its sovereignty should India decide to undertake a misadventure. She said, “If India forces a war on us, then we know how to defend ourselves.”

She continued, “We have the capacity, the capability and the commitment for it, which we have demonstrated before. Ultimately we want to avoid war. And we are doing so. But if India takes the first step, then the 220 million population of Pakistan will stand shoulder to shoulder with its armed forces and protect every inch of our country.”

India’s irresponsible behavior and unconstitutional conduct, and its human rights violations in Kashmir, and keeping it constantly landlocked where old and young men and women are all victims of India’s state terrorism.

Dr. Firdous added, “The Pakistan army is ready to sacrifice to protect and defend the nation. You have seen how this army has eliminated the cancer of terrorism from the country with the help of the citizens.”

Special Assistant to the Prime Minister on Information and Broadcasting issued a stern warning, “It is our responsibility to teach India a lesson, and compete equally at the military level to defend our holy motherland.”

Dr. Firdous observed that after 17 long years of war, Afghanistan is all set to welcome peace and stability, and Pakistan is eager to play a facilitative role that would cement regional peace and security. She said, “The world has accepted Pakistan in its role as a responsible nation.”

She stated that during Prime Minister Imran Khan’s official visit to the US, the international community has praised “his commitment to bring peace to this region.” She recalled US President Donald Trump’s offer to mediate between India and Pakistan to facilitate a peaceful resolution of the longstanding Kashmir dispute.

Dr. Firdous said, “Now, the American leadership offered to mediate in this issue. They can play the role of a referee. India refused to accept a referee.” Special Assistant to the Prime Minister on Information stressed that Pakistan wants peace in the region. She said, “We are at a nuclear flashpoint because Kashmir is a flashpoint and we are two nuclear powers.”

Dr. Firdous continued, “India’s irresponsible behavior and unconstitutional conduct, and its human rights violations in Kashmir, and keeping it constantly landlocked where old and young men and women are all victims of India’s state terrorism.”

Stressing the need for an intervention staged by the international community, Dr. Firdous observed, “Pakistan tells the world community and leadership that they should intervene in this issue because of the role state terrorism plays in India, Modi’s personal conduct and their RSS ideology.”

Dr. Firdous said that all these factors indicate that the Modi-led Hindu extremist government is all set to wipe away secularism from India, paving the way for the creation of a Hindu-dominated state. She said, “All these indicate that they have erased the secular face of India and they are moving towards a Hindu state.”

She continued, “The first target and victim is the ethnic cleansing of Muslims, and Kashmiris are an easy target for them.” Special Assistant to the Prime Minister stressed that Pakistan not only seeks peace for its own development and growth, but more importantly, it is eager to welcome peace in South Asia in order to promote regional development and security.

Special Assistant to the Prime Minister stressed that this heavy militarization and unprecedented lockdown indicates that Kashmiri right for self-determination is being quelled by brute force and aggression.

Responding to a question on the possibility of bilateral dialogue to resolve the ongoing dispute and escalations, Dr. Firdous said, “Pakistan has never said that we will not resolve this with dialogue.”

She continued, “But India’s mindset is drunk with power, and it does not accept Pakistan’s existence. We want composite dialogue to be resumed and we discuss, but Kashmiris are the third party in this. They should join in this and the dialogue process should proceed. War is not the solution to any problem.”

Commenting on a question of Kashmir being an “internal matter for India”, Dr. Firdous observed that it is a “legal and constitutional issue.” She noted that the Supreme Court of India and the Indian constitution had provided Kashmir the right to maintain autonomy.

She said, “India’s claims are baseless and fictitious because this is regarded as a disputed issue at an international level.” Dr. Firdous stressed that as the citizens of Kashmir, Kashmiris have a justified right to self-determination and freedom.

She questioned the presence of 900,000 Indian troops deployed in the occupied Himalayan valley if the Modi administration believes that Kashmir wants to be a part of India. Special Assistant to the Prime Minister stressed that this heavy militarization and unprecedented lockdown indicates that Kashmiri right for self-determination is being quelled by brute force and aggression.