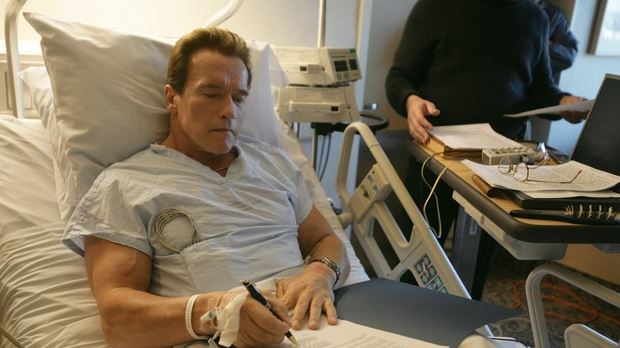 Hollywood actor, Arnold Schwarzenegger, had a heart surgery this week but the actor says he is feeling fantastic on Friday afternoon. “I have a new aortic valve to go along with my new pulmonary valve from my last surgery. I feel fantastic and have already been walking the streets of Cleveland,” the “Terminator” actor and former California governor tweeted.

Schwarzenegger, 73, posted a picture of himself giving a thumbs up from his hospital bed at the Cleveland Clinic, and thanked medical staff there.

Thanks to the team at the Cleveland Clinic, I have a new aortic valve to go along with my new pulmonary valve from my last surgery. I feel fantastic and have already been walking the streets of Cleveland enjoying your amazing statues. Thank you to every doc and nurse on my team! pic.twitter.com/hmIbsEMHtA— Arnold (@Schwarzenegger) October 23, 2020

The actor, who was born with a heart defect, underwent emergency open-heart surgery in 2018 to replace a pulmonary valve.

Schwarzenegger became one of the world’s best-known action movie stars in the 1980s with films including “Conan the Barbarian” and “The Terminator,” and comedies such as “Twins.”

In 2003 he was elected governor of California and championed environmental policies. After ending his term in 2011, he returned to movies, appearing in “The Expendables 2,” as well as a sequel to “The Terminator.”

He's back. Arnold Schwarzenegger says he feels fantastic after recent heart surgery. The 73-year-old “Terminator” actor and former California governor posted a photo of himself with a thumbs up from his hospital bed. https://t.co/rsQ5e51h5B— The Associated Press (@AP) October 24, 2020

Schwarzenegger took a little longer to recover from his March 2018 surgery, which originally replaced a pulmonic valve originally installed in 1997 to correct a congenital effect. Two weeks later, he informed his fans that he was feeling better but “not great yet”.

He returned to star in all three “Expendables” action movies as Trent “Trench” Mauser along with 2015’s “Terminator Genisys,” “The Last Stand,” “Killing Gunther,” and “Aftermath.” In August he announced to star in an hour-long spy series in the works at the Skydance Television. He also returned for the “Terminator” franchise for the sixth film in the series “Terminator: Dark Fate,” which was released last year and earned $261 million at the worldwide box office.

Can parents be used as partners in making school reopenings successful?

No interest in talks if US ‘hostile military moves’ continue: N. Korea