A top trend circulated on a social media platform which was shared by many in Pakistan. The trend said #arrestantiPakistanjournalists. Twitteratis were quick to jump in and comment. Many pictures emerged where top Pakistani journalists were tagged. Many claim it to be PTI funded campaign. 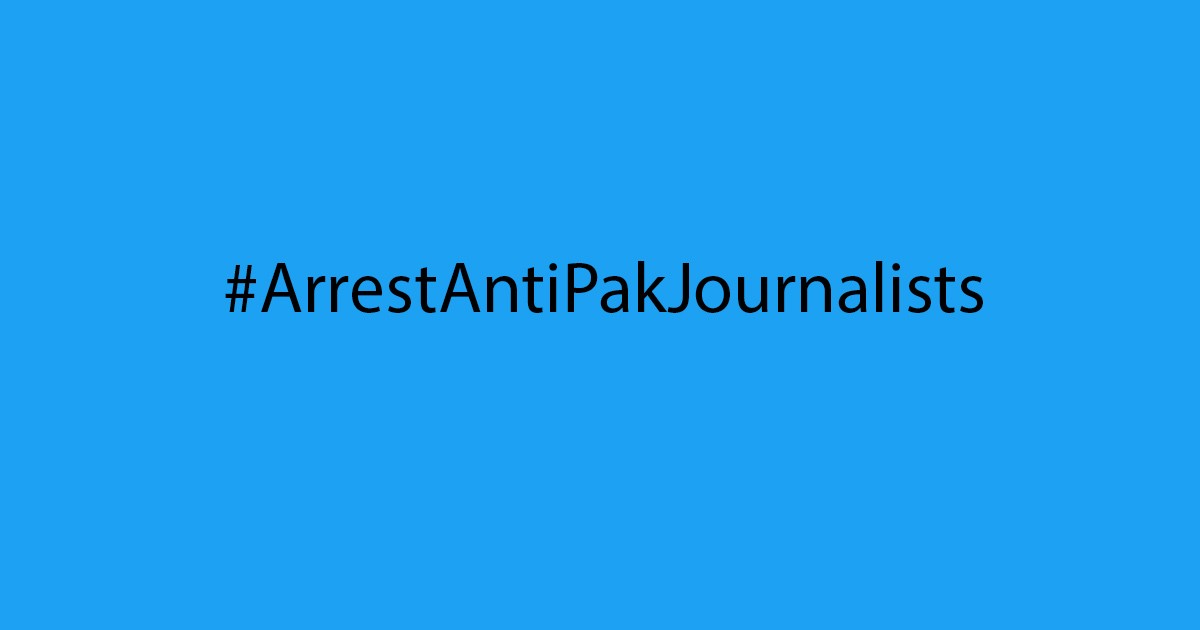 A hashtag calling for the arrest of journalists briefly became the top Twitter trend in Pakistan Thursday, deepening concern over a shrinking space for dissent in the country.

The hashtag #ArrestAntiPakjournalists had dropped to second place by evening, but not before it had been used or forwarded more than 28,000 times.

Many users accompanied it with a composite photograph of prominent journalists and TV anchors, some of whom regularly criticize the governing Pakistan Tehreek-e-Insaf (PTI) party of Prime Minister Imran Khan and the powerful military establishment.

“These are the people who are responsible for chaos, anarchy, manipulation. They are the real enemy of the states,” said one tweet.

“Hang them all #ArrestAntiPakJournalists,” said another.

Criticism of the country’s powerful security establishment has long been seen as a red line for the media, with journalists and bloggers complaining of intimidation tactics including kidnappings, beatings, and even killings if they cross that line.

Hamid Mir launched a Twitter tirade against increasing censorship after his interview with ex-president Asif Ali Zardari, now an opposition leader was abruptly taken off the air shortly after it began

Last year, the Committee to Protect Journalists (CPJ) said in a report that the military has “quietly, but effectively, set restrictions on reporting”, although it denies doing so.

Shahzad Ahmed, of digital rights group Bytes for All, said the hashtag appeared to have been “planted” by pro-PTI accounts and was not “genuine public opinion”.

“There are organised groups who start such trends… which is a very dangerous phenomenon in our country, regarding freedom of expression and personal freedom,” @bytesforall told AFP.
https://t.co/DFPR630wrT

“There are organized groups who start such trends, which is a very dangerous phenomenon in our country, regarding freedom of expression and personal freedom,” he told AFP.

“Responsible use of social media is now becoming impossible in our country. Now we use social media, only to abuse others and to promote fake news and to disrespect each other, which is completely wrong.”

An image of Hamid Mir, one of Pakistan’s most high-profile TV anchors, was prominent among the photographs of journalists being shared.

They use liberty of speech to harm their own land just to get paid by our enemies. Show their real traitor faces and #ArrestAntiPakJournalists pic.twitter.com/NAI6H8440u

Read more: Zardari’s Interview taken down: Can he even appear on National TV?

Two days ago he launched a Twitter tirade against increasing censorship after his interview with ex-president Asif Ali Zardari, now an opposition leader was abruptly taken off the air shortly after it began.

“We are not living in a free country,” he wrote.

All cases against PML-N are false, if corruption is found I should be hanged: Shehbaz Sharif