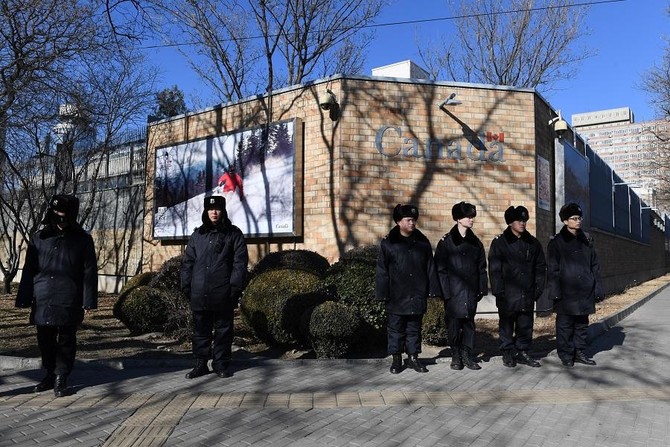 The arrest of a third Canadian in China has heightened anxiety even in an expatriate community accustomed to some level of fear and uncertainty. Beijing on Thursday confirmed it arrested Canadian Sarah McIver for “working illegally” in the country, following the detention of two other Canadians on national security grounds.

While Canadian authorities said the latest detention appears to be a routine visa case, it has nonetheless exacerbated concerns among Canadian expatriates in China fearful that they too might be detained over a legal technicality.

“I think most Canadians that are here are living in fear at some level, a fear of losing what they have here, a fear of getting arrested, fear of retribution,” said Shanghai-based Ricky Ng-Adam, founder of CoderBunker, a community of software developers.

“Canada is really just caught in between the US and China, we’re like a scapegoat,” a businesswoman in education told AFP, requesting anonymity for fear of reprisals.

“It’s a constant fear,” he said, adding that some of his compatriots self-censor their social media postings and try to keep a low profile. Former Canadian diplomat Michael Kovrig and China-based business consultant Michael Spavor were detained on December 10 and accused of engaging in activities that “endanger China’s national security”.

Kovrig is a senior advisor at the International Crisis Group think tank, while Spavor facilitates trips to North Korea, including visits by former NBA star Dennis Rodman. Though no link has officially been made between the three detentions, suspicions are mounting that China is holding at least two of the Canadian nationals in retaliation of Canada’s arrest of Meng Wanzhou, a top executive at Chinese telecom giant Huawei.

The ambiguity surrounding the arrests has also added to the unease, said Canadian Adrian Wu, who frequently travels to China for both work and leisure. “Even though the third person arrested is not related to the cases of the first two, people see the headlines and immediately think ‘a Canadian got taken’,” he said.

Ottawa has repeatedly said Meng’s arrest was not political but rather part of a judicial process in keeping with an extradition treaty with Washington. Meng was released on bail last week in Vancouver pending her US extradition hearing on fraud charges related to sanctions-breaking business dealings with Iran. Ottawa and Washington on Friday stepped up pressure on Beijing and called for the immediate release of Kovrig and Spavor.

Observers say Canada is increasingly looking like collateral damage in a simmering US-China trade war, with Beijing at the same time working to ease trade tensions with Washington. “Canada is really just caught in between the US and China, we’re like a scapegoat,” a businesswoman in education told AFP, requesting anonymity for fear of reprisals.

Like a number of Canadian expats, she is using the holidays as an excuse to stay out of the country. “At least I can remain in North America to see how the situation will play out from a safe distance”, she said. Others in the Canadian community, speaking on condition of anonymity, said they are making contingency plans to leave the country “just in case” the situation takes a turn for the worse.

“Developments such as these increase uncertainty and distrust among foreign scholars who regularly conduct research within China, as they fear for their safety,” the joint statement said.

It is now up to China to decide how much they want to escalate the situation, said Hugh Stephens, distinguished fellow at the Asia Pacific Foundation of Canada. “The Chinese aren’t going to influence the Canadian court system by whatever they do but there could be a lot of collateral damage, which could seriously potentially damage relationships in the long term,” he said.

Despite the volume of business between Canada and China, people might “start wondering whether or not they’d be targeted” and consider a “long Christmas holiday”, he added.

The fallout from the arrests could have implications beyond the immediate Canadian expat community, including researchers who visit China. On Thursday, representatives of six Berlin-based institutions, which included the European Council for Foreign Relations and the German Marshall Fund, expressed concern about the spate of Canadians detained.

“Developments such as these increase uncertainty and distrust among foreign scholars who regularly conduct research within China, as they fear for their safety,” the joint statement said. “This will clearly undermine efforts to better understand developments in China.”

Yet some feel there is no need to overreact, calling this “China’s way of dealing with things”. “I’m not worried about this on a day-to-day basis and I certainly won’t change my daily activities because of a few people who have been detained,” financial analyst Scott Laprise told AFP.

“There’s always a sense at the back of my mind that something could happen, but that’s a part of living in China.” The Canadian embassy and the Canadian China Business Council did not respond to AFP requests for comment.

Outcry over ‘Free coffee for Life’ offer to Harry, Meghan