The Afghan capital was rocked by two gruesome attacks. Although no militant group has claimed responsibility for the attacks but Afghan President Ashraf Ghani has blamed the Taliban & Islamic State for the attacks. Therefore, he has ordered the Afghan forces to resume attacks against the militants. 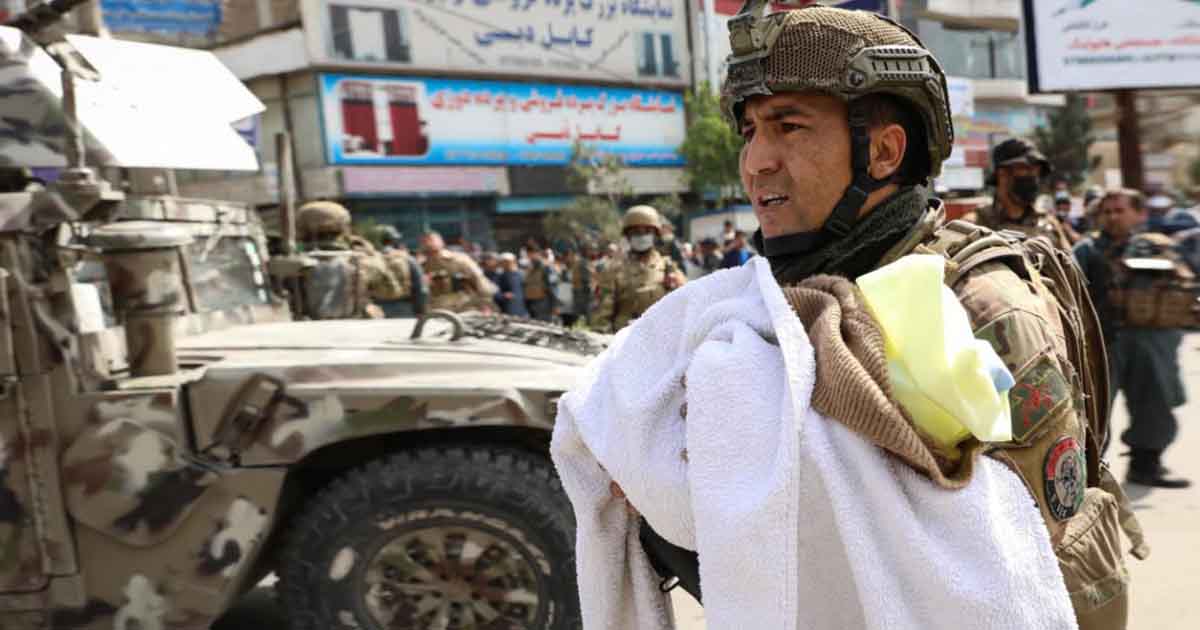 Afghanistan’s floundering peace process appeared further in peril Tuesday, with security forces ordered to resume offensive operations against the Taliban in response to two attacks that were shocking even for a country numbed by decades of war.

At least 14 people were killed — including newborns and nurses — when gunmen stormed a maternity hospital in Kabul early Tuesday, officials said. Shortly after, a suicide blast at a funeral in the country’s restive east left two dozen mourners dead.

No group immediately claimed responsibility for the bloodshed, but President Ashraf Ghani blamed the Taliban and the Islamic State group.

“Today, we witnessed terrorist attacks by the Taliban and Daesh groups on a hospital in Kabul and a funeral in Nangarhar, as well as other attacks in the country,” Ghani said in a televised address, using the Arabic abbreviation for IS.

He ordered Afghanistan’s security forces to end their “active defence position” and “return to offensive postures, and resume their operations against the enemy.”

The move comes months after Afghan forces pledged to only react defensively to Taliban attacks.

It was meant to show good faith ahead of eventual peace talks, but the Taliban did not reciprocate, instead unleashing a wave of violence that began the moment the insurgents signed a deal with the United States.

Ghani said offensive operations were needed to “defend the country, safeguard our countrymen and infrastructure, and to repel attacks and threats by the Taliban and all other terrorist groups.”

The three attackers were eventually killed in a lengthy clearance operation. Heavily armed security forces were seen carrying infants — at least one wrapped in a blood-soaked blanket.

Attack on newborns and mothers in hospital, attack on mourners in funeral ceremony and attack on national army, is not humanity,
what to entitle any deal with doers of these heinous acts ? #EndOfHumanityInAfghanistan pic.twitter.com/i7K3Wqnxet

Some 15 people were wounded and more than 100 — including three foreign nationals — were rescued, he said.

One of the wounded, Jamila, said she had taken a grandchild to the hospital for some vaccinations.

“We were outside the hospital. I wanted to go inside when they shot me and one of my grandchildren was killed,” said Jamila, who only gave one name.

The hospital is in a neighbourhood that is home to Kabul’s minority Shiite Hazara community — a frequent target of hardline Sunni IS militants.

The hospital is supported by the humanitarian organisation Doctors Without Borders (MSF), and a number of foreigners were working there.

Read more: How does the pandemic provide opportunity to speed up Afghan peace process?

“It beggars belief that such a heinous act could be committed when Afghanistan is being ravaged by the COVID-19 pandemic,” UN Humanitarian Coordinator Toby Lanzer said.

About an hour after the attack, a suicide bomber killed at least 24 people at the funeral of a local police commander in eastern Nangarhar province, provincial spokesman Ataullah Khogyani said.

The attacker detonated explosives in the middle of the ceremony.

“We were preparing (to stand in line for the funeral) when I heard a big blast and then saw hundreds of people on the ground,” said Zabit Amir, a mourner at the funeral, which others said was attended by thousands.

The Afghan government and our international partners, have a responsibility to hold the Taliban and their sponsors accountable. The reason to pursue peace is to end this senseless violence. This is not peace, nor its beginnings.

“I did not even know who was alive or dead there.”

The Taliban denied involvement in either attack.

The latest killings raise fresh questions about the fate of a hoped-for peace process that is teetering just as Afghanistan grapples with a public health crisis.

The Taliban have largely refrained from launching major attacks on Afghan cities since February, when they signed a deal with the US meant to pave the way for peace talks with the Kabul government.

The accord will see all US and foreign forces quit Afghanistan over the next year. Thousands of US troops have already gone, with a drawdown to 8,600 expected within months.

Pentagon spokesman Lieutenant Colonel Thomas Campbell said that “this is going to be a windy, bumpy road, but a political agreement is the best way to end the war.”

However, he added that “consistent with the agreement, the US military will continue to conduct defensive strikes against the Taliban when they attack” Afghan partners.

Michael Rubin, a resident scholar at the American Enterprise Institute, likened the peace process to a comatose patient with “no one willing to pull the plug but everyone falling all over themselves with hope if they see an eye blink.”

But, he added, Ghani has no other choices than to return to the battlefield.

Laurel Miller, director of the International Crisis Group’s Asia program, said she still hoped a peace process can play out, but was concerned it might be “dying a death by a thousand cuts”.

However another Afghanistan expert, Barnett Rubin, said putting troops on the offensive was a “reasonable response” that does not sabotage the process.

“On the contrary, it may be necessary to save it,” he said.

The violence comes just a day after four roadside bombs exploded in a northern district of Kabul, wounding four civilians including a child.

Those bombings were later claimed by IS.

In March, at least 25 people were killed by an IS gunman at a Sikh temple in the Afghan capital.

Tell Americans not us to put down arms: Afghan Taliban to Khalilzad

Why is India violating ceasefire on LOC amid Corona?