Asia Bibi’s Verdict: How the TLP & the rest are reacting 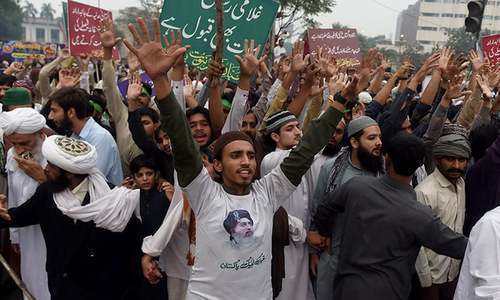 Soon after the verdict announced by Supreme Court earlier today in Asia Bibi’s blasphemy case, followers of Tehrik-e-Labaik Pakistan took it to the roads and staged a sit-in in various cities of Pakistan.

Asia Bibi accused of blasphemy was acquitted today by the SC and was ordered to be released immediately. Khadim Rizvi, leader of TLP had earlier called his followers to be prepared for the protest and threatened to “paralyze the country within hours if the SC sets Asia Bibi free.”

The protesters forced the news network’s automobile to flee the area. In Punjab, Okara, Renala Khurd, Patoki, Manga Mandi and Paka Meel along National Highway have also been blocked.

TLP leaders, while addressing protesters in Lahore today, asked them to turn against the army, judiciary as well as the PTI-led government in “retaliation to the verdict”.

Many find an echo of the brutal terror group Tehreek-e-Taliban Pakistan (TTP) in this declaration. It capitalized on the sentiments that arose after the bloody Lal Masjid Operation which can be mirrored in the extremist backlash to Asia’s freedom.

The TTP also used similar rhetoric and called for the lower ranks to rise up against the upper for “anti-Islamic” activities. There is much similarity between the TTP rhetoric and the TLP’s.

Announcements by Leaders of Religiopolitical Parties

Mufti Hanif Qureshi led a rally towards Faizabad in Islamabad. Khadim Rizvi staged a sit-in in front of Punjab Assembly in Lahore.Jamiat Ulema-i-Islam-Fazl (JUI-F) has announced that it will hold countrywide protests on Friday against the Supreme Court’s verdict in the Asia Bibi case.

“Instead of court, we will approach the court of public on this verdict.” — Jamiat Ulema-i-Islam-Fazl (JUI-F) chief Fazlur Rehman.

Jamaat-i-Ahle Hadees, a religious party has also called for demonstrations against apex court’s verdict on Asia Bibi’s appeal. The party’s spokesperson Riaz-ur-Rehman Yazdani said that the leadership has called upon its workers to join protests.

Protests spearheaded by the TLP started in various parts of the country as they gathered around the main areas of Karachi, Lahore, and Islamabad, blocking all the commuting. Protestors not only blocked the roads and mishandled the commuters but also burnt tires in reaction to the verdict.

“Extraordinary security arrangements should be made. Anti-riots and reserve platoons should be kept ready.” — Sindh IGP Kaleem Imam.

Several points on Lahore-Islamabad Motorway including Babu Sabu, Faizpur, Sheikhupura, and Kala Shah Kaku interchange have been blocked by protesters, railway lines in Upper Jhelum Canal are shut down, and in Karachi, unidentified motorcyclists forced the shopkeepers to close the market.

A DSNG of 92 News was reportedly pelted with stones by protesters in the Numaish area of Karachi. The protesters forced the news network’s automobile to flee the area. In Punjab, Okara, Renala Khurd, Patoki, Manga Mandi and Paka Meel along National Highway have also been blocked.

Punjab home department has imposed Section 144 across the province citing “threats to the law and order situation, sectarian harmony and public peace”. Section 144 will remain in place from Oct 31 to Nov 10.

The home department has banned assemblies of more than five people at a public place, protests, carrying weapons (except those by LEAs), use of loudspeakers (except for azaan) and delivering provocative speeches, under Section 144, that gives authorities the power to issue orders in face of “apprehended danger”.

Rangers’ officials have been deployed in the Youhanabad area of Lahore to deter any potential unrest. Youhanabad is the largest Christian neighbourhood in Pakistan.

Sindh police chief Kaleem Imam has told the provincial police force to stay on high alert and patrol their areas.”Extraordinary security arrangements should be made. Anti-riots and reserve platoons should be kept ready.” — Sindh IGP Kaleem Imam.

In Baluchistan too, Government has imposed Section 144 across the province to curb the deteriorating situation due to demonstrations.

The Government of Sindh has imposed Section 144 in the province in light of the “constant threat alerts regarding possible terrorist activities” and will remain in place from Oct 31 to Nov 10 in Sindh.

The government of Sindh has also established a central control room to “monitor the prevailing law and order situation” and “maintain liaison and communication with all the controls rooms of respective police, law enforcement agencies, commissioners and deputy commissioners”.

In Baluchistan too, Government has imposed Section 144 across the province to curb the deteriorating situation due to demonstrations.

It is not the first time that TLP has tried to play the part of a violent protestor. Last year in November, daily life in Islamabad was disrupted for 20 days by TLP protesters believing that during the passage of the Elections Act 2017, the Khatm-i-Nabuwwat oath was deliberately modified as part of some conspiracy.

Why no impeachment of CIA officials for conspiring to murder Castro ?