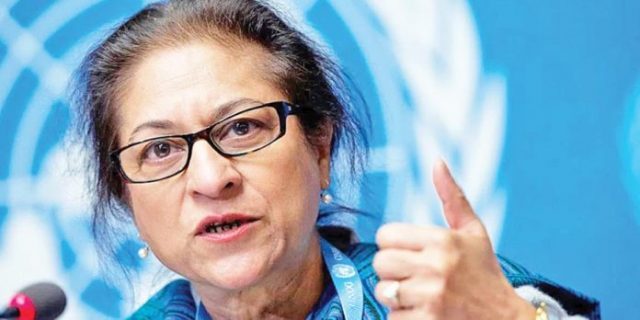 Human rights activist, Lawyer, and commentator Asma Jahangir’s first death anniversary is being observed across Pakistan today. Miss Jahangir passed away on 11 February 2018 due to cardiac arrest. The Asma Jahangir Legal Foundation will pay tribute to the human rights defender in a ceremony to be held on Monday, 11th February.

Born and raised in Lahore, Jahangir studied at the Convent of Jesus and Mary before receiving her B.A. from Kinnaird and LLB from the Punjab University in 1978. In 1980, she was called to the Lahore High Court, and to the Supreme Court in 1982. In the 1980s, Jahangir became a democracy activist and was imprisoned in 1983 for participating in the movement for the restoration of democracy against the military regime of Zia-ul-Haq. In 1986, she moved to Geneva, and became the vice-chair of the Defence for Children International and remained until 1988 when she returned to Pakistan.

In 2016, she was named as the United Nations Special Rapporteur on the Situation of Human Rights in Iran, remaining till until her death in February 2018.

In 1987, Jahangir co-founded the Human Rights Commission of Pakistan and became its Secretary-General. In 1993, she was elevated as the commission’s chairperson. She was again put under house arrest in November 2007 after the imposition of emergency. After serving as one of the leaders of the Lawyers’ Movement, she became Pakistan’s first woman to serve as the President of the Supreme Court Bar Association.

According to her Wikipedia page, she co-chaired South Asia Forum for Human Rights and was the vice president of International Federation for Human Rights. Jahangir served as the United Nations Special Rapporteur on Freedom of Religion from August 2004 to July 2010, including serving on the U.N. panel for inquiry into Sri Lankan human rights violations and on a fact-finding mission on Israeli settlements. In 2016, she was named as the United Nations Special Rapporteur on the Situation of Human Rights in Iran, remaining till until her death in February 2018.

Jahangir is the recipient of several awards including the 2014 Right Livelihood Award (along with Edward Snowden), 2010 Freedom Award, Hilal-i-Imtiaz in 2010, Sitara-i-Imtiaz, Ramon Magsaysay Award in 2005, 1995 Martin Ennals Award for Human Rights Defenders, and the UNESCO/Bilbao Prize for the promotion of a Culture of Human Rights. She was awarded a Legion of Honour by France, and in 2016 the University of Pennsylvania Law School awarded her an honorary degree.

Jahangir was posthumously awarded the Nishan-e-Imtiaz on the 23rd March 2018 by the then president Mamnoon Hussain.

We want de-escalation: Both Iran & US seek sensible solution