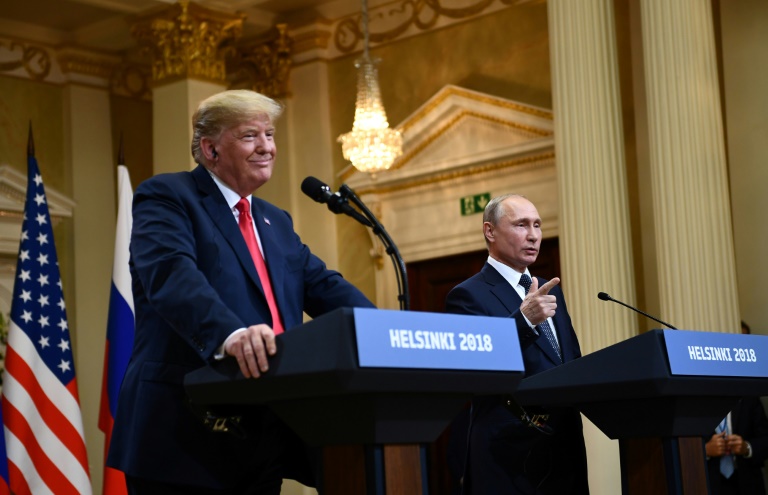 Russian President Vladimir Putin has made a concrete offer on Ukraine to his US counterpart Donald Trump, the Russian ambassador to Washington said Friday, after a report that the Kremlin chief suggested a referendum in conflict-torn eastern Ukraine.

“We strongly reject this weird idea of holding referenda in the occupied territories,” Oleksii Makeiev, head of the political department at the Ukrainian foreign ministry, said on Twitter.

“This problem has been discussed, concrete proposals have been made on how to resolve this issue,” Anatoly Antonov said, referring to the four-year conflict. He declined to provide specifics at the meeting of experts and journalists in Moscow.

Antonov spoke after Bloomberg reported Thursday that at the Helsinki summit, Putin called for a referendum to be held with the help of the international community in Ukraine’s breakaway regions of Donetsk and Lugansk, which Russia-backed separatists control.

Read more: Trump Putin meeting: what hurdles will they have to address?

Citing officials who attended Putin’s closed-door meetings with Russian diplomats on Thursday, Bloomberg said Trump had asked Putin not to publicise the referendum idea after Monday’s summit to give the US leader time to consider it.

Antonov, however, denied that Putin had made any secret deals with Trump at the summit which has unleashed a political firestorm in the United States.

“The Russian side made several very serious proposals some of which were announced by Vladimir Vladimirovich (Putin) at the news conference,” Antonov said. “There were no secret agreements,” he added. “There were discussions on the Syrian issue, on Ukraine, concrete orders were given to experts to work in this area.”

After a Western-backed popular uprising in Kiev in 2014 ousted a Kremlin-backed regime, Russia annexed the peninsula of Crimea and moved to support a separatist insurgency in Ukraine’s Russian-speaking eastern regions of Donetsk and Lugansk.

Moscow made Crimea part of Russia after a hastily conducted referendum whose results were rejected by the international community.

US State Department spokeswoman Heather Nauert tweeted: “To be clear: The Administration is not considering supporting a referendum in E Ukraine – A “referendum” would have no legitimacy. We continue to support #Minsk agreements for solving the conflict in #Donbas #ukraine @StateDept.”

Putin has repeatedly denied sending Russian troops across the border to buttress separatist forces, despite evidence to the contrary.

The Ukraine conflict, now half-forgotten by the West amid other crises and its own divisions, has claimed over 10,000 lives and still sees nearly daily clashes between pro-Russian and Ukrainian forces.

France and Germany helped broker the so-called Minsk agreements in 2015 but they are poorly observed and the peace process has essentially ground to a halt.

Writing on Facebook, Russian foreign ministry spokeswoman Maria Zakharova said: “If ‘the international community’ and first and foremost the United States could not make Kiev fulfill the Minsk agreements then other options to settle the internal Ukrainian crisis can be discussed.”

Antonov accused the Ukrainian authorities of failing to honor the agreements.

“We should ask a question: is Minsk alive or not? If all the countries support the Minsk agreements then they need to be observed,” he said. Ukrainian officials immediately rejected the proposal.

“We strongly reject this weird idea of holding referenda in the occupied territories,” Oleksii Makeiev, head of the political department at the Ukrainian foreign ministry, said on Twitter.

A top lawmaker and peace negotiator, Iryna Gerashchenko, said holding a vote “at gunpoint” was unfathomable. Putin has repeatedly denied sending Russian troops across the border to buttress separatist forces, despite evidence to the contrary.

Firefighter reveals last conversation with Princess Diana before her death