ATM robber in a viral video died during police interrogation 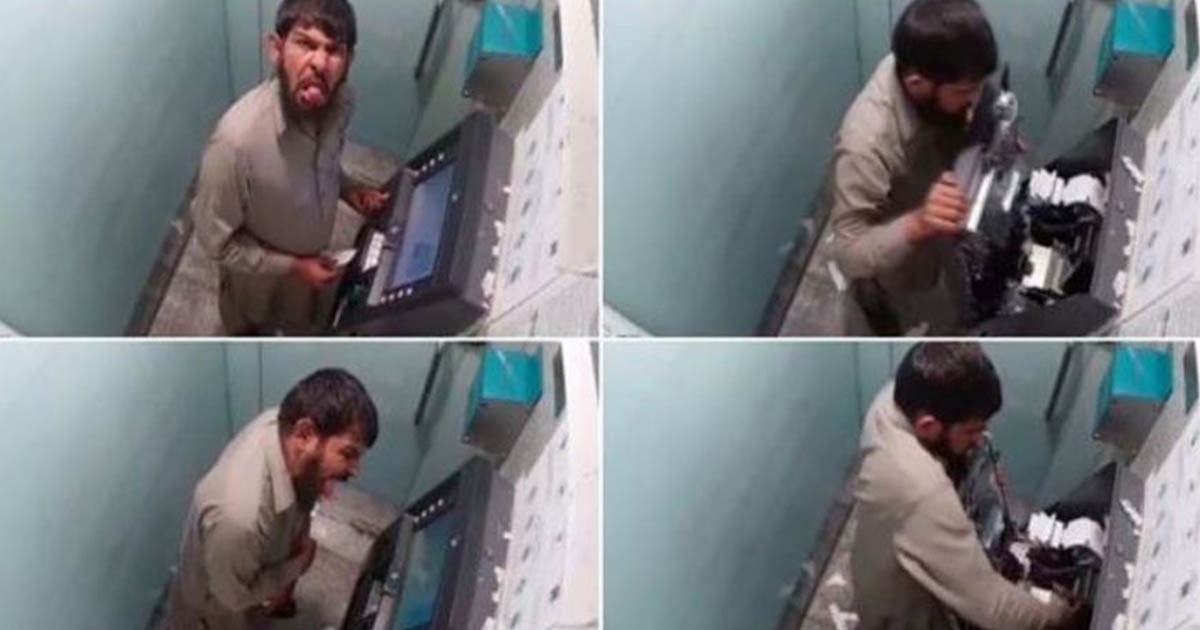 Salahuddin Ayubi, a brazen ATM thief mysteriously died in the police custody after being caught red-handed while breaking open into the ATM in Rahim Yar Khan. Ayubi from Gujranwala first came to public attention after his video of stealing the ATM card in Faisalabad went viral on social media. Ayubi stuck his tongue out in both the cameras installed in the booth during robbery amused the internet users.

His antics made his identity prominent in the CCTV footage. Ayubi was arrested from Rahim Yar Khan and was wanted in the Faisalabad ATM robbery case. According to the district police officer’s spokesperson Zeeshan Randhawa, Ayubi started behaving like a ‘mad man’ during interrogation in custody. He suddenly fell unwell in the lockup as Police claimed he died of a heart attack. Randhawa added that he was soon shifted to the emergency section of the Sheikh Zayed Medical College Hospital where doctors confirmed his death. He was dead before he was taken to hospital.

The hospital staff refused to comment on the condition in which he was brought to the hospital. According to hospital management, they can only ascertain the cause of his death after obtaining the post-mortem report. Meanwhile, the body of Salahuddin was shifted to morgue.

Additionally, he said that DPO Umar Farooq Salamat had constituted an inquiry team, headed by Superintendent of Police Investigation, to look into the matter.

A bizarre video that circulated on the internet showed Salahuddin Ayubi stole the card of the customer, which was stuck in the ATM. The customer left the ATM booth to get the help of the bank staff, Ayubi took off the top shelf of the machine and took the card, he withdrew Rs.64,000 from the ATM card.

The news of his death in police custody caused a furor on the internet as people accused the Punjab Police of killing the criminals with horrific physical torture. Calls were made on social media for Police to review their brutal interrogation practices, which often lead to the death of the criminals before reaching the court.

Others pointed out that Ayubi was arrested thrice before, however, was not given proper rehabilitation. Punjab government’s spokesperson Shahbaz Gill had to intervene to calm down the furious netizens about the ongoing investigations into the death of the theif.

The ATM robber who died was earlier caught 3 times. The question is why wasn't he rehabilitated then? Or punished for breaking the law. Petty thieves die in lock ups and the ones who robbed billions are in A class jails and VIP rooms in hospitals. No justice here— Nusrat Hussain (@NusratHussain02) September 1, 2019

The brutality of Punjab Police is exposing day by day but very sad Usman Buzdar the CM of Punjab is sleeping and no action is taken against the culprits. The recent example of their brutality came when the ATM robber died at Rahim Yar Khan Police. Any one take action ?— Naveed Iqbal (@naveedisd) September 1, 2019

actually, need the
whole surgery. This system has sympathy. I'm shocked to hear that the news about ATM robber extradition killing was done by police. No one reaction was seen at any level. pathetic too!!— M.Nadeem 🇵🇰🇹🇷🇨🇳 (@nadeem35) September 1, 2019

Why this Atm robber doesn't get the Medical tests facilities .. just like Zardari and Nawaz , shehbaz all bloody rascals .. coz you don't have the guts.. shame on #BuzdilBuzdar #PoliceBrutality of Punjab have risen and y u always take action after getting social media reports???

Does being an ATM robber make it ok for police to beat the crap out of someone so much that they die? Is there any accountability for police brutality in Pakistan? ⁦@ShireenMazari1⁩ https://t.co/hNmMDu2SIB— Alia Chughtai (@AliaChughtai) September 1, 2019

Solidarity from Iraq: “We want to breathe, too”

The story of intrigues, deception & the dual accession of Kashmir