Chinese, Korean and Japanese automakers have long dominated the global auto market with their innovation, aesthetics and technology. But the world remembers the Germans as the champions of comfort rides. Mercedes, founded in 1890, has competed neck and neck with Audi, the latter having been founded merely 5 years earlier in 1885. Needless to say, after more than a hundred years of competition, Audi has the upper hand in creating reliable, comfortable and equipped cars within the affordability of various classes of enthusiasts, all across the world. The new 2018 Audi Q5 is the best example of that. 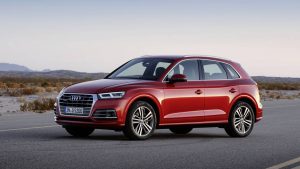 Audi Pakistan has launched the brand new 2018 Audi Q5, and it is not a mere facelift or a refresh; contrary to what Honda has done to its customers with the City. Audi has displayed a much more serious and far-sighted approach than Honda, which explains why Audi has ruled the car world for a hundred years.

The Q5 is a completely new generation. The consumer will now get a completely redesigned body as well as a new interior. However, aesthetically, the second generation Audi Q5 takes all its hints and design cues from the first generation Q5. Audi has built the front end of the 2018 Q5 in a much more aggressive stream than its predecessors. The front grill is more angular and bold. The car now overall sits lower and has a lower roofline.

As far as the engine options are concerned, Audi Pakistan will sell the new car with a 1984 cc 4-cylinder inline engine mated to a 7-speed S Tronic gearbox. The engine generates 252 BHP and 370 Nm of torque. According to Audi, the car does 0-100 km/h in 6.3 seconds and can do 237 km/h. The top speed is at a midline but the 0-100 velocity is a new personal best.

Previous article
Is India making ballistic missiles to counter military capability of China?
Next article
Nawaz Sharif hoping to transform Sindh “if given the chance”

When Mr. Xi comes to town