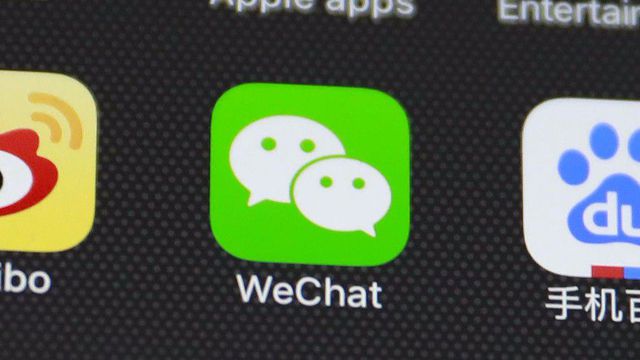 WeChat, social media and chat app owned by Chinese tech-giant, Tencent, has been banned by the Australian defense department last week. Amidst growing concerns within the Australian security establishment about espionage activities by Chinese spies, a spokesman from the department of defense said, “”Defense does not provide or support the use of unauthorized software, including the WeChat social media application, on Defense mobile devices.”

A ‘security assessment’ is also being conducted on Whatsapp. Former head of the department of defense, Dennis Richardson, also said that spies from China were “very active” within Australia. The top intelligence agency in Australia, the Australian Secret Intelligence Service, was reported as being ‘overwhelmed’ by the activities of foreign spies within the country, after which the decision to ban WeChat was announced. It is important to note that WeChat has only been banned for use by staff and personnel serving in the Australian Armed Forces. The app is open for use by the civilian population.

These debates are still raging on. The problem is that the technology has developed much faster than legislation over the technology ever could. To what extent companies should be allowed to collect or sell our data is still a gray area and we only just beginning to explore it.

WeChat is available on both android and IOS. The basic interface is that of a chatting app, much like Whatsapp, Telegram or the Facebook messenger. The platform boasts over 1.1 billion accounts, with at least half a billion monthly active users. At least 900 million users are said to be in China alone, with over 70 million in foreign countries. In addition to chatting, the app has the option of linking one’s credit card with the app account to allow seamless digital transactions. Similar to Facebook, one can share photos or videos through the app as well.

It is the first app of its kind that combines features usually found across a multitude of applications. Perhaps, this is why officials in the Australian department of defense are concerned about the app, since there is a possibility of integrating the data of users onto a single platform. One cyber security expert, speaking to the Australian Financial Review, said, “The understanding is that applications like WeChat have a higher ability to aggregate and monitor data.” All this data in the wrong hands can prove to be a security hazard.

This is not the first time that a country has banned smartphone apps developed in another country, particularly when relations with that country are far from ideal. Whatsapp, Google, Instagram and Facebook-apps that are American in origin-are all banned in China. In December of last year, about 42 apps developed by Chinese companies were banned in India by the department of defense. A notification issued by the Indian ministry of defense ordered all officers and staff to uninstall the prohibited apps and format their smartphones.

“As per reliable inputs, a number of Android/IOS apps developed by Chinese developers or having Chinese links are reportedly either spyware or other malicious ware. Use of these apps by our force personnel can be detrimental to data security having implications on the force and national security,” the notification said. These 42 apps also included WeChat.

A report by Amnesty International in 2016 ranked various messenger and social media apps in terms of the strength of their encryption and security and privacy in general. WeChat was ranked the lowest, with a score of 0 out 100. Facebook scored 73 while Google scored 53 out of 100.

It is not only apps but handheld devices such as phones that have been banned for security reasons by various countries. Security forces in Pakistan were prohibited from using Blackberry phones, since the content of these devices could not be monitored or cracked by the authorities within Pakistan without potential loss of data. In 2017, the US military also banned the use of drones made by DJI, a Chinese company and also the world’s biggest maker of easy-to-fly drones for aerial photography and other ‘peace-time usages’, citing ‘security vulnerabilities’.

Similarly, a potential deal between Huawei, a Chinese company, and AT&T, the American Telecom Giant, also fell through because of pressure by the US government to prevent what they see as undue Chinese influence in the American tech industry. There are various dimensions to the privacy-security debate. Three such dimensions can be identified at the intra-state, inter-state and the user-to-company level. At the intra-state level, the debate got reinvigorated after the Edward Snowden leaks.

Snowden revealed that the National Security Agency in America was collecting massive amounts of data on all 300 million citizens in the US, in addition to the data collected from ally countries. The reasons given are that this data may be required to sniff out potential terrorist threats in the future. At the intra-state level, countries ban apps like WeChat and Facebook because there is the possibility that the data of citizens obtained through these apps may be used for spying on the nation.

And finally, at the user-to-company level, there is controversy over how much personal information should we cede to giant social media platforms such as Facebook in exchange for the services they provide. Although Facebook and Google offer their services for ‘free’, what they get in return is data about us-massive amounts of data. This data helps advertisers to push their products to specified demographics, country and region, down to the level of the individual. Privacy advocates such as Privacy International argue that too much power has been given to social media platforms, since each and every click by us while we browse the internet is potentially adding to the database about us.

This is not the first time that a country has banned smartphone apps developed in another country, particularly when relations with that country are far from ideal. Whatsapp, Google, Instagram and Facebook-apps that are American in origin-are all banned in China.

It is disconcerting to contemplate the fact that we may not know ourselves any better than the algorithms that tech companies are running on do. From time to time, there is tension between private companies and the government as well. For example, Apple and the US government have been feuding for some time. The CIA, the FBI and other law enforcement and security agencies want “backdoor access” to data that Apple may collect about its users. Apple, on the other hand, promises end-to-end encryption and claims it can’t give backdoor access to the US government because even Apple itself doesn’t have it.

Even if one party has this kind of access, so the experts say, then everyone from hacker to street criminal to US government will immediately have it as well. There seem to be no two ways about it. It was a concern that the Chinese government may have “backdoor access” to data collected through WeChat that led the Australian department of defense to ban the app.

A report by Amnesty International in 2016 ranked various messenger and social media apps in terms of the strength of their encryption and security and privacy in general. WeChat was ranked the lowest, with a score of 0 out 100. Facebook scored 73 while Google scored 53 out of 100.

These debates are still raging on. The problem is that the technology has developed much faster than legislation over the technology ever could. To what extent companies should be allowed to collect or sell our data is still a gray area and we only just beginning to explore it. Meanwhile, states may continue to ban social media apps citing security concerns, for these concerns are genuine.