At Least 8 people have been killed, so far, and countless others are stranded in the holidays. The authorities have ordered mass evacuations before the heatwave hits. 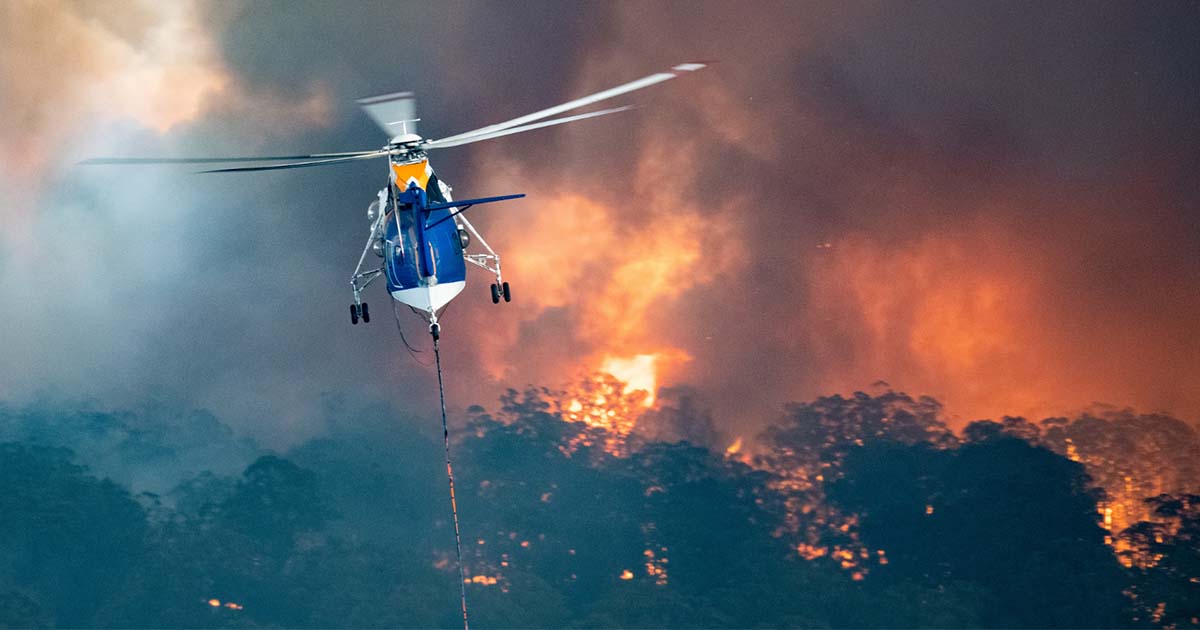 Thousands of tourists have been given less than 48 hours to evacuate fire-ravaged coastal communities as Australia braces for a weekend heatwave expected to fan deadly bushfires.

Experts believe that the fires are a direct result of the combination of record heat, due to Climate Change, combined with unprecedented drought in the already dry regions; causing unprecedented bushfires.

The New South Wales (NSW) Rural Fire Service on Thursday morning declared a “tourist leave zone” stretching about 200 kilometres (125 miles) from the popular holiday spot of Bateman’s Bay along the picturesque coast to neighbouring Victoria state, where people are also being urged to flee.

In his first official press conference since the latest blazes flared, Morrison said Thursday said “every absolute effort” was being made to assist affected communities

At least 18 people are now known to have died in one of Australia’s most devastating bushfire seasons yet, and there are growing fears the toll could rise dramatically, with officials in Victoria saying 17 people were missing in the state.

Visitors are being warned to leave affected areas before Saturday, when another heatwave is expected to sweep across the country, with gusting winds and temperatures above 40 degrees Celsius (104 Fahrenheit).

That weather will create conditions officials say will be as bad as — if not worse than — Tuesday, the deadliest day in a months-long bushfire crisis.

Many tourists and residents spent two nights isolated with no electricity or telecommunications, before authorities on Thursday declared some roads safe to use.

NSW Transport Minister Andrew Constance called it the “largest evacuation of people out of the region ever”, with a queue of cars stretching along the highway toward Sydney as thousands flee the area.

One driver told AFP it had taken her three hours to travel just 50 kilometres (30 miles). NSW Rural Fire Service deputy commissioner Rob Rogers said firefighters would be unable to extinguish or even control the raging blazes.

There are growing fears the toll could rise dramatically, with officials in Victoria saying 17 people were missing in the state

“The message is we’ve got so much fire in that area, we have no capacity to contain these fires,” he told ABC. “We just need to make sure that people are not in front of them.”

John Steele, 73, who lives outside the south coast town of Merimbula, told AFP some people were “panicking” amid the warnings to evacuate. “There’s so much misinformation on Facebook and on the web,” he said.

Steele said the region had been “chaotic” in recent days as fresh produce and fuel supplies ran low, but he and his wife were staying put for now. “We’re happy to see every man and his dog leave town,” he said. “We are cautious, we have our bags packed.”

Authorities still have not been able to reach some rural communities, such as the town of Genoa in Victoria.

The number of homes confirmed destroyed in recent days has topped 400, with that figure expected to rise as firefighters reach communities still isolated by flames.

Navy ship HMAS Choules arrived early Thursday in Mallacoota — where people huddled on the foreshore for hours on New Year’s Eve as a fire bore down on the remote town — to begin evacuating people, a defence force spokeswoman said.

Emergency Management Victoria deputy commissioner Chris Stephenson said some vulnerable people had already been rescued and a further 500 people would be extracted at the beginning of a lengthy operation.

“Today it’s starting to move potentially the tourists in Mallacoota, and residents who may not want to be there,” he said.

John Steele, 73, who lives outside the south coast town of Merimbula, told AFP some people were “panicking” amid the warnings to evacuate

“With the number of people in Mallacoota, this is going to take days, if not weeks, to be able to achieve.”

Military aircraft have also been working with emergency crews to drop relief supplies into isolated areas and assess the fire damage.

Bushfire to affect residents and holidaymakers long after the flames die out. The #bushfire crisis engulfing New South Wales and Victoria has filled #evacuation #zones up and down the coast. https://t.co/gPIXvfqL7C— 🇵🇹Common Raven🇺🇸 (@Bewickwren) January 2, 2020

This season’s blazes have destroyed more than 1,300 homes and scorched over 5.5 million hectares (13.5 million acres) across the country — an area far greater than Denmark or the Netherlands.

Read more: Australia scrambles to save people from apocalyptic fires

The unprecedented crisis has sparked street protests calling on the government to immediately act on climate change, which scientists say is creating a longer and more intense bushfire season.

Conservative Prime Minister Scott Morrison has come under increasing pressure for his actions, which included holidaying in Hawaii as the disaster unfolded and reiterating his support for Australia’s lucrative — but heavily polluting — coal mining industry.

In his first official press conference since the latest blazes flared, Morrison said Thursday said “every absolute effort” was being made to assist affected communities.

“The best way to respond is the way that Australians have always responded to these events and that is to put our confidence in those who are fighting these fires,” he said, while defending Australia’s climate change policies as “sensible”.

Can India turn Chabahar from a gift into a curse?

Government close to getting agreement on the extension of Military Courts