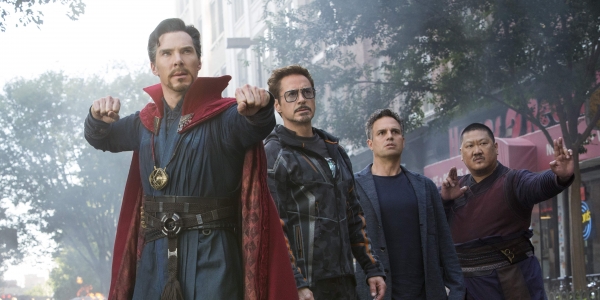 The Disney blockbuster, featuring a string of Marvel superheroes out to save the universe from powerful purple alien Thanos (Josh Brolin), has a cumulative three-week take of $548.1 million, according to box-office tracker Exhibitor Relations.

Returning to their Marvel roles in the film is Robert Downey Jr. as Iron Man, Benedict Cumberbatch as Doctor Strange, Scarlett Johansson as Black Widow and Chris Hemsworth as Thor. Running a distant second with what normally would be a respectable $17.9 million was “Life of the Party,” a Melissa McCarthy comedy in its first weekend out.

The Lionsgate remake, starring Anna Faris and Eugenio Derbez, is about a struggling single mother who persuades a rich playboy with amnesia that they are married.

McCarthy, who co-wrote the script with her husband, the movie’s director Ben Falcone, stars as a newly divorced mother who returns to college, where her daughter is in her senior year. Another new film, “Breaking In,” a thriller starring Gabrielle Union, was third at $17.6 million.

Read more: Why “Avengers: Infinity War” is a must watch

Review website Rotten Tomatoes dismissed the film as a “rote, disposable action thriller” but praised Union’s performance as a mother fighting to save her children from criminal hostage-takers.

Rom-com “Overboard” slipped from second to fourth place with a box office take of $9.9 million in its second weekend in theaters. The Lionsgate remake, starring Anna Faris and Eugenio Derbez, is about a struggling single mother who persuades a rich playboy with amnesia that they are married.

Number five at the box office was Paramount’s sci-fi horror film “A Quiet Place,” which stars actor-director John Krasinski and his real-life wife Emily Blunt as a couple silently struggling to protect their family from blind aliens that track their prey by sound. It made $6.5 million.

Rounding out the top ten were:

Singapore, a model for economic success, hits a technical recession

A week after Ethiopia crash, questions swirl around Boeing